Here's one approach that would put labor on the offensive: an initiative for a new law providing all workers with due process rights to challenge unjust discipline and discharge, "Just Cause for All." 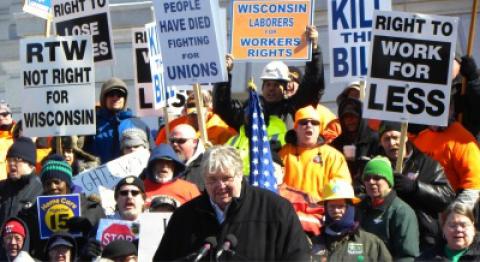 Without aggressive action, the right-to-work tsunami will sweep more states. "Just Cause for All" campaigns should be part of the strategy., Glenn Schmidt

Wisconsin is now the 25th state to adopt a so-called “right-to-work” law, which allows workers to benefit from collective bargaining without having to pay for it.

It joins Michigan and Indiana, which both adopted right to work in 2012. Similar initiatives, or variants, are spreading to Illinois, Kentucky, Maine, Missouri, New Hampshire, New Mexico, and West Virginia—and the National Right to Work Committee and the American Legislative Exchange Council probably have a well-developed list of additional targets.

Without aggressive action, the right-to-work tsunami will sweep more states. To defeat it, the first step is committing to fight back, rather than resigning ourselves to what some say is inevitable.

We’ll have to go beyond what we’ve mostly been saying so far, which is that right to work is “unfair” or “wrong.”

That argument certainly works for most union households and many of our community allies. But the real challenge is to convince a much broader public that a strong (and fairly-funded) labor movement is in their interest and worth preserving. Clearly most Americans aren’t yet convinced.

Many unions over the last few years have undertaken important campaigns along these lines. For example, teachers unions have positioned themselves as defenders of quality public education. Refinery workers have struck for public safety.

Nurses and health care unions have fought for safe staffing to improve the quality of care. And most notably, the Service Employees (SEIU) and others have waged the “Fight for $15” for fast food and other low-wage workers.

In its own way, each union is working hard to be a champion of the entire working class. Yet with the exception of SEIU’s Fight for $15, each is essentially focused on the issues of its core constituency at work. This still limits the public’s perception of labor.

Supporters of right to work cynically play on the resentment many workers feel about their declining standard of living. Absent a union contract, the vast majority have few, if any, ways to address it. To most, organizing looks impossible and politics looks broken.

Workers’ understandable frustration is fertile ground for the far right, which promises to improve the business climate and create more jobs by stripping union members of their power.

Thus, when we anticipate right to work’s next targets, the best defense should be a good offense—one that clearly positions labor as a force for the good of all workers.

‘Just Cause for All’

Here’s one approach that would put labor on the offensive: an initiative for a new law providing all workers with due process rights to challenge unjust discipline and discharge, “Just Cause for All.”

Such a law would take aim at the “at-will” employment standard covering most non-union workers in the U.S. At-will employees can be fired for any reason and at any time—without just cause.

While such a major expansion of workers’ rights as Just Cause for All would be unlikely to pass in most state legislatures—Montana did it in 1987, but it’s still the only one—it could become law in states that allow ballot initiatives.

A well-orchestrated attack on the at-will employment standard would force the extreme, anti-worker, and big business interests who back right to work to respond. If nothing else, imagine how competing initiatives would force a debate. On one side, extending due process protections and increased job security to all workers: a real right-to-work bill. On the other side, taking away fair share contributions for collective bargaining.

This strategy isn’t untested. When the Coors beer dynasty backed a right-to-work ballot initiative in Colorado in 2008, labor collected signatures for a counter-initiative, “Allowable Reasons for Employee Discharge or Suspension,” which would have overturned at-will employment. (Labor also supported a proposal that would have provided affordable health insurance to all employees and a measure to allow workers injured on the job to sue for damages in state courts.)

Fearing that the just cause proposal might pass, centrist business people offered a deal. In exchange for labor withdrawing its proposal, they provided financial support and manpower that helped labor defeat right to work in Colorado. (For more on this story, read “The 2008 Defeat of Right to Work in Colorado: Is it the End of Section 14(b)?” Raymond L. Hogler, Labor Law Journal, Spring 2009.)

While it’s unfortunate that the labor initiative didn’t go before Colorado voters, the result was still encouraging—and instructive. By championing the interests of all workers, labor split business and blunted the right-to-work effort.

Just Cause for All campaigns should be part of the strategy. Even if we lose, campaigns for due process and job security for all will help shift the debate on right to work, leave the labor movement stronger—and make labor and its allies once again the champions of the “99%.”

Rand Wilson is policy and communications director at SEIU Local 888 in Boston.

Re: Cesar Chavez, the UFW, and Why Unions are Needed

While Campbell's review of the significant, ever-changing/escalating systemic role of the power structure assault is important, seems to me Campbell misses one of the main messages of critiques of UFW's development.  To successfully confront systemic racism, capital and other anti-worker assaults we must have participatory, evolving and power-based ORGANIZATION based on progressively-defined and strategic self-interest. Not just movements/mobilizations, not just charismatic or personal leaders, not just imaginative tactics.  Yes, we workers need allies and an inclusive definition of the working class (that evolves as capitalism evolves), but workers must have our OWN organization(s) working for POWER in which workers develop politically, utilize new skills and ACT COLLECTIVELY to fight and create the justice and peace we deserve.  There is much to learn from the heroic work of the UFW -- what to seize and apply and what to NOT apply, hopefully not in a mechanistic way.  We're responsible to learn from our history as we continue to organize -- that's a part of utilizing dialectics.

I don't agree with your assessment, at least of the Bardacke book.  I didn't read Pawell or Neuberger so I can't comment on those books.  But Bardacke was not at all minimizing the power of corporate ag to destroy unions.  The point of his book was to help organizers understand the importance of control from below, grassroots organizing, and supporting the power of the masses, not the power of the leaders.  He paints a beautifully detailed picture of the skilled nature of farm work and the potential of farmworkers to control their own union.  I think one of the most damning parts of Bardacke's book is exposing the anti-Mexican immigrant position and behavior of the UFW.  That was appalling.  Chavez could not see an alliance with "illegals" and that was certainly a short coming.  Finally, Bardacke warns about the responsibility of the people around the leader, the "seconds in command":  they have the duty to confront the leader when they see that the leader is dangerously veering off course.  We need to correct each other early enought to insure that democratic unionism, class struggle fromk below wins out.  I think you did not characterize Bardacke's book accurately.  He didn't "blame" the UFW for the failures.  He recognized the viscious role of Big Ag.  But he does point out how our organizing can strengthen the working people's movement as much as possible.

Re: Labor Had Better Get Its Act Together

RE: Laws that Decimate Unions May be Inevitable. Here's How Labor Can Survive

Fundamentally, these laws are about power. In the last 35 years a massive shift in power, money and influence has shifted from the public sector to the private sector. Businesses have gotten richer and more powerful, have been at the table in globalization talks, have developed lobbyists to get most venal politicians in their pockets, and have sponsored media that spin the ideology that government is bad, business is good and unions should not exist.

Up against these forces labour cannot easily cope. The law works against organizing; workers don't know much about unions and are afraid justifiably of their employers and so the level of unionization in the U.S. has dropped like a stone especially in the private sector but politicians are going after public sector unions now too. And in this mix the Taft-Hartley law has again been used to bust unions as it was when it was first introduced, at a time when unions had large memberships and union members supported their unions.

The problem with all of this is that just because large corporations are getting their way about how the economy is organized, they are not only wrecking much of the economy, and the planet (as they contribute to global warming more than anyone else), but they are wrecking people's lives. The generation of people in their 20s and 30s are not getting enough work; jobs are not steady, not well-paid, have no benefits etc.

The value of collective action by workers who form unions and pressure employers to negotiate is not only that that process of collective bargaining raises wages, but it also makes for a tiny bit of democracy in industry. Companies still run their businesses but they have to talk to organized workers about their terms and conditions of work. So the drastic drop in a unionized work force is not just a drop in labour standards it is a decrease in democracy. That makes workers passive or reactionary and that is not good for a healthy economy or a democratic political process.

In the period when workers organized unions they did so against great odds, but they not only succeeded in gaining collective bargaining rights, but gaining a higher standard of living and became more active politically. That generation lived through the Great Depression and the Second World War and they wanted a new society where they were treated better and got more of the economic pie after the war. They succeeded against great odds.

The recent short strikes in the private service sector against the fast food industry were an indication that workers want to do better and are willing to work for a better future. But the only way for labour to achieve a better environment is to not only throw out the right wing governments in office, but to elect genuinely progressive people to replace them. We will see what happens in Greece as there people got fed up and acted politically. As the two American parties are currently in the hands of the same old crowd, political action will be a tough task. Increasingly there is not much alternative to political change and organizing because the repugnant political course the U.S. is on is bad for the economy, bad for its position as a global leader, and is also not advancing the world on climate change which will destroy all of us if we don't wake up.

It is time for new leaders, new activism, laws that help people not just big companies and time is running out. Labour will fight to survive but it cannot do it alone and there needs to be overall change. Tinkering will not suffice.

Re: Teacher Unions Default on the Fightback

Teachers and Teacher's unions in the United States are in a two party system.  If they support candidates;, it has to be one or the other.  Obama and Arne Duncan are all wrong about education, but what can you do.  Mitt Romney was worse.  in Chicago;, that rotten Democrat, Rahm Emanuel has been trying to destroy the public schools and the president of the Chicago Teachers' Union was going to run against him until she got sick.  Now the Union is supporting the most progressive of the candidates in the primary.