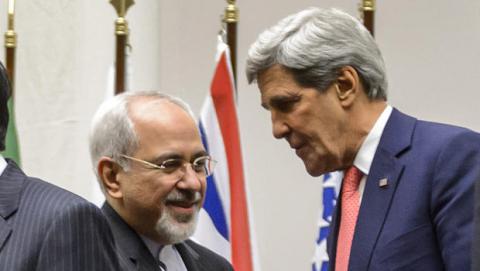 US television news isn’t very good and it has clearly gotten worse over the past 20 years. In the aftermath of the Kerry-Zarif initial framework deal on nuclear energy in Iran, it seems obvious that an interview with Iranian Foreign Minister Mohammad Javad Zarif would be newsworthy. But to my knowledge none of the networks or major cable news shows had him on.

Or you could have talked to the British, French, German, Russian or Chinese foreign ministers, all of whom were principals and all of whom would have had interesting insights.

Instead, Israeli Prime Minister Binyamin Netanyahu was given repeated access to millions of Americans to talk trash about the deal over the weekend and to make mostly false allegations about its contours. Israel is a small country of 8 million with a gross domestic product in the range of Portugal. Netanyahu isn’t a party to the deal. He doesn’t have more riding on it than Britain or France. Israel isn’t even threatened by Iran, since Israel has several hundred nuclear weapons and submarines to deliver them. Iran has only old, conventional weapons. Even if it someday had a nuclear weapon, which its leaders say would be un-Islamic and that they don’t want it, Israel has a powerful deterrent.

So what is really going on? Netanyahu let it slip in an interview on CNN’s State of the Union on Sunday:

“Secondly, Iran is going to have sanctions lifted, including crippling sanctions, pretty much up front. And that’s going to have billions and billions of dollars flow into the Iranian coffers, not for schools or hospitals or roads, but to pump up Iran’s terror machine throughout the world.

And it’s a military machine that’s now engaged in conquest throughout the world in Iraq and Syria and Yemen, around the borders of Israel elsewhere.”

Is it true that the Iranian state would not spend the money that it garnered through a lifting of sanctions on schools or hospitals?

Look, I am no fan of the Islamic Republic or its system of government or its censorship and authoritarianism. But let us say that Netanyahu, in standing for permanent military rule over 4 million stateless Palestinians, and in launching disproportionate military campaigns with disregard for non-combatant life, is not obviously superior.

And, as far as social spending goes, Iran is in principal as progressive as Israel, though not as rich per capita. The Iranian state has built enormous numbers of schools since 1979, especially in rural areas, and [pdf] has brought literacy among the over-15 population from 65% in 1990 to 90% today. In the 15-25 age group, literacy is fully 98% and there are nearly 4 million university students. Iran has done better in educating its women than most other Middle Eastern countries, and a majority of Iranian college students is women.

Literacy rates were low in the 1970s and relatively few Iranians went to university then. You can’t produce an impressive change in literacy that way without investing substantially in schools.

The crippling sanctions on Iran that make Netanyahu’s mouth water so much have badly hurt the 60,000 Iranian students studying abroad, making it difficult for them to transfer money and causing the value of the riyal to plummet. Those students are not politicians and ought not to have their futures held hostage to geopolitics.

As for health care, Iran has universal health care, unlike the USA, and it is mandated in the Iranian constitution. The Islamic Republic has spent substantial sums making it more available to the population, including in previously neglected rural areas. Crippling sanctions over the long term would certainly pose severe health risks to ordinary Iranians.

So it simply is not true that the Iranian state does not spend on schools and hospitals, as Netanyahu alleged. His purpose in making this false claim is to deflect an obvious critique of “crippling” sanctions, which is that they harm ordinary people, not just the state.

His allegation that an Iranian commander pledged to destroy Israel is unlikely to be true. The Iranian leadership doesn’t like Israel, but they have a no first strike policy and don’t have the slightest intention of attacking anyone with conventional military forces. Iran is too far away to attack Israel and it would be madness to strike at a nuclear power. Typically Iranians say things like “the Occupation regime must end,” and people like Netanyahu interpret that to be a threat to roll tanks (Iran has actually made no such threats, whatever you have been told).

As for his charge that Iran is using its oil money to spread terrorism or conquer the Middle East, this claim is mostly also for the most part not true. Netanyahu counts a national liberation organization that fought Israeli occupation such as Lebanon’s Hizbullah as a “terrorist organization.” What he really means is that it interfered with Israel annexing 10% of its neighbor Lebanon’s territory (which it held 1982-2000). He counts Iran’s help to Iraq in fighting Daesh (ISIL or ISIS) as a “conquest” of Iraq! in all this verbiage, the major legitimate knock against Iran with regard to its foreign activities is that Iran has helped the regime of Bashar al-Assad in Syria to survive, something it has done through odious practices such as barrel-bombing its own population. But Netanyahu doesn’t even say anything about that except to complain that Iran is active near Israeli borders with Syria.

“Crippling” sanctions haven’t in any case stopped Iran from arming Hizbullah and there is no reason to think they ever will. Moreover, given the weakness of the Lebanese military, someone needs to keep the Israelis from trying to annex Lebanese territory again.

Netanyahu has showed his hand. He wants to use the USA and the Treasury Department to sanction Iran into penury, to keep its middle classes small and shrinking and to cut people’s income, education and health care. He wants a total war on Iran, including on Iranian women, children and non-combatants. It isn’t a plausible aspiration, and it isn’t a worthy one.