Obama Could Face Another Disastrous Summit Due to Sanctions Against Venezuela

What the sanctions made clear is that President Obama’s opening to Cuba represented exactly zero change in Washington’s overall strategy toward the region: The intention of expanding commercial and diplomatic relations with Cuba was mainly to pursue a more effective strategy of undermining the Cuban government--and all of the left governments in the region. 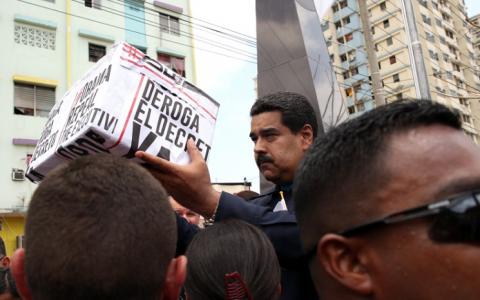 The last (2012) Summit of the Americas, in Cartagena, Colombia, was a disaster for President Obama. There were scandals involving Secret Service agents and sex workers, an increasing rebellion from the South against the failed U.S. “War on Drugs,” and—most of all—unanimous opposition to the U.S. embargo on Cuba.

The most decisive evidence that this was not just the usual suspects stirring up trouble was the warning from President Manuel Santos of Colombia—one of Washington’s few “friendlies” in the region —that there would not be another Summit without Cuba.

So President Obama offered up a surprise Christmas present to its Southern neighbors last year: after more than a half-century of aggression against Cuba, he would finally begin to normalize relations. Welcome to the 21st century, finally! Although Republican jihadis and neocons would inevitably delay the process in Congress, the White House publicly expressed hope that there would at least be embassies open in the two countries before the Summit on April 10.

But the Lord giveth, and the Lord taketh away. On March 9 the White House declared a “national emergency” due to the “extraordinary threat to the national security” posed by Venezuela. The Obama administration tried to dismiss the language as a mere formality, but the world knows that such threatening language and accompanying sanctions can be quite hazardous to the designated country’s health – in the past they have sometimes even been followed by military action.

Most ominously in the present, at a U.S. Senate hearing on March 17, the State Department’s Alex Lee declared that the current sanctions were just the “first salvo” against Venezuela. Of course, the world outside of Washington knows that the sanctions have nothing to do with any alleged human rights violations in Venezuela. From 2000 to 2010, the Colombian military assassinated more than 5700 innocent civilians; the U.S. government continued to provide literally billions of dollars of military and police aid.  In Honduras, the Obama administration took numerous steps to help ensure that the 2009 military coup against the democratically elected government of Mel Zelaya would succeed. And in Mexico, 43 students were disappeared six months ago with complicity of local authorities and police, and possibly federal police and government as well.  But the U.S. government does not appear to be concerned, and will not even consider reducing its military aid to Mexico.

What the sanctions also made clear, for those who didn’t already know, is that President Obama’s opening to Cuba represented exactly zero change in Washington’s overall strategy toward the region: The intention of expanding commercial and diplomatic relations with Cuba was mainly to pursue a more effective strategy of undermining the Cuban government--and all of the left governments in the region. This includes Brazil, where the U.S. State Department funded efforts to weaken the Workers’ Party (PT) government in 2005, according to U.S. government documents.

Representatives of Brazil, Mexico, Colombia, Argentina and nearly every country in the Americas spoke out against the sanctions at the Organization of American States (OAS) last Thursday in Washington. The Union of South American Nations demanded their repeal. So did the Community of Latin American and Caribbean States, which includes all countries in the hemisphere except the U.S. and Canada. And on March 26 the opposition governor of the state of Lara sent a letter to President Obama, asking him to “take a moment of your time to listen to the voice of the people of Venezuela and the rest of Latin America that have spoken out in favor of the rescinding of this executive order that you signed.”

“If there is a country that is a threat in the Americas,” said Ecuadorean Foreign Minister Ricardo Patiño, “it’s the United States, because it has permanently invaded countries,” “created coups d’état” and “promoted dictatorships.” The Cuban government also responded forcefully, dashing Obama’s hopes of any deal before the Summit.  Negotiations in Havana that were expected to last until mid-week ended abruptly on Monday, March 16. So Obama will go to the Summit empty-handed and with some egg on his face because of this ill-considered move.

These sanctions against Venezuela violate the charter of the Organization of American States, including Article 20, and Article 19, which states:

No State or group of States has the right to intervene, directly or indirectly, for any reason whatever, in the internal or external affairs of any other State. The foregoing principle prohibits not only armed force but also any other form of interference or attempted threat against the personality of the State or against its political, economic, and cultural elements.

Let’s hope that all of the governments represented at the Summit hammer it home that this kind of “rogue state” behavior will not be tolerated.

Mark Weisbrot is co-director of the Center for Economic and Policy Research, in Washington, D.C. and president of Just Foreign Policy. He is also the author of the forthcoming book Failed: What the "Experts" Got Wrong About the Global Economy(Oxford University Press, 2015).