books Darkness on the Edge of Town

Chief Justice John Roberts grew up in a town that banned black residents. Places like Long Branch, Ind., were often called Sundown Towns. Only whites were allowed on the streets after dark. James W. Loewen published the first study of these towns ten years ago, just as Roberts was named to the court. Laura Wexler published one of the few reviews of the book. Along with the review, below, are links to the book's website and to the book's introduction. 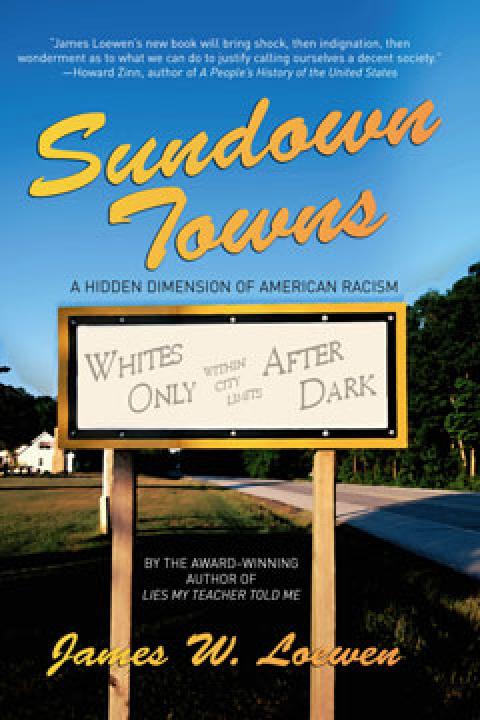 Inroduction to the Book

Darkness on the Edge of Town

A Hidden Dimension of American Racism

In Oct. 2001, James W. Loewen stopped at a convenience store in the small Illinois town of Anna -- a name that, as a store clerk confirmed, stands for "Ain't No Niggers Allowed."

On Nov. 8, 1909, nearly a century before Loewen stepped into the store, a mob of angry white citizens drove out Anna's 40 or so black families following the lynching in a nearby town of a black man accused of raping a white woman. Anna became all-white literally overnight, Loewen reports, and embraced racial exclusiveness for the long haul. According to the 2000 census, just one family with a black member lives among Anna's 7,000 residents.

Anna is far from unique, as Loewen, a sociologist, argues in his powerful and important new book, Sundown Towns . On the contrary, Loewen reports that -- beginning in roughly 1890 with the end of Reconstruction and continuing until the fair-housing legislation of the late 1960s -- whites in America created thousands of whites-only towns, commonly known as "sundown towns" owing to the signs often posted at their city limits that warned, as one did in Hawthorne, Calif., in the 1930s: "Nigger, Don't Let The Sun Set On YOU In Hawthorne." In fact, Loewen claims that, during that 70-year period, outside the traditional South, "probably a majority of all incorporated places [in the United States] kept out African Americans."

Such a bold claim would seem to require an exact count of sundown towns to back it up. But Loewen admits that the challenges of uncovering and confirming the existence of each sundown town -- when everything from census figures to local histories proved misleading -- limited his ability to nail down an exact figure. Instead, he writes, "I believe at least 3,000 and perhaps as many as 15,000 independent towns went sundown in the United States, mostly between 1890 and about 1930."

This vagueness, along with Loewen's almost evangelical passion for his material, raises questions of credibility -- or at least of potential overstatement. But Loewen expertly dodges those accusations. He devotes almost an entire chapter to explaining his research -- detailing his rationale for defining sundown towns, laying out his statistical methods and revealing how he triangulated oral history, written sources and census data to arrive at a "confirmation." So when he reports that he's personally verified the existence of roughly 1,000 sundown towns between 1890 and 1930, you believe him. And because he pairs that finding with an analysis of the history, causes and patterns of sundown towns that shows that they were, in many ways, as logical -- and often as violent -- an outgrowth of American racism as lynching, he ultimately makes a strong case that sundown towns were a significant feature of the American landscape. As is often the case when the subject is race, the relative lack of hard evidence ultimately becomes part of the story, rather than a hindrance to it.

As in Anna, whites in about 50 towns used mob violence to expel and keep out African Americans, and many more relied on the threat of violence, Loewen reports. Some towns, he writes, passed "legal" ordinances banning hiring blacks or renting or selling them homes; others relied on citizens to pay informal visits to warn visiting African Americans that they "must not remain in the town." In 1960, the press reported that realtors in Grosse Pointe, Mich., had conceived of an altogether more clinical way to insure racial exclusivity: a "point system" used to assess a potential buyer's eligibility that included a rating for swarthiness.

Often, Sundown Towns argues, a community used a variety of methods in order to remain all-white through the years. To demonstrate this, Loewen charts the course of segregation in Wyandotte, Mich.: In the early 1870s, whites there drove out a black barber; in 1881 and 1888, they expelled the town's black hotel workers; in 1907, four white men beat and robbed a black man at the train station; nine years later, a mob of white townspeople "bombarded" a boardinghouse, driving out all the African Americans and killing one. "In the 1940s," Loewen writes, "police arrested or warned African Americans for 'loitering suspiciously in the business district' or being in the park, and white children stoned African American children in front of Roosevelt High School." In the early 1950s, a University of Pennsylvania professor who grew up in Wyandotte told him, all the members of a black family who moved into town ended up dead.

If Loewen's first priority is to unveil what he calls the "hidden history" of sundown towns, his second is to debunk the widely held idea that when the issue is race, the South is always "the scene of the crime," as James Baldwin famously wrote. The incidence of sundown communities in the South, Loewen reports, was actually far lower than it was in a Midwestern state such as Illinois, in which roughly 70 percent of towns were sundown towns in 1970. "This does not make whites in the traditional South less racist than [those] in . . . other regions of the country," he suggests.

With the rise of the automobile, among other things, came the birth of sundown suburbs. In 1909, Loewen reports, Chevy Chase, Md., became one of the nation's first after the owner of the Chevy Chase Land Company sued a developer to whom it had sold a parcel of land because of rumors that he planned to build affordable housing for African American workers. The company ultimately prevented the development, and the land sat vacant for decades before becoming home to Saks Fifth Avenue, its current resident. No doubt, the owner of the Chevy Chase Land Company would approve of the suburb's current racial makeup; in 2000, Loewen writes, "its 6,183 residents included just 18 people living in families with at least one African American householder." But even that isn't white enough anymore, Loewen charges: Whites are increasingly fleeing nearly all-white suburbs for lily-white exurbs, adding sprawl to the already numerous economic, psychological and sociological tolls of residential segregation.

Much has been written about the history of segregation within American cities, but this is the first full-length study of places that sought to exclude African Americans entirely. Loewen's desire to be exhaustive is therefore understandable. But in this case, exhaustive sometimes means exhausting. The book would have been more enjoyable to read had Loewen focused in depth on a few representative sundown towns, teasing out the history and sociology of the phenomenon in a more narrative, less textbook-like form.

That said, for its meticulous research and passionate chronicling of the complex and often shocking history of whites-only communities, Sundown Towns deserves to become an instant classic in the fields of American race relations, urban studies and cultural geography. After reading it, you'll view your own community, and the whole of the American landscape, more suspiciously -- and rightly so.

Laura Wexler is the author of "Fire in a Canebrake: The Last Mass Lynching in America."