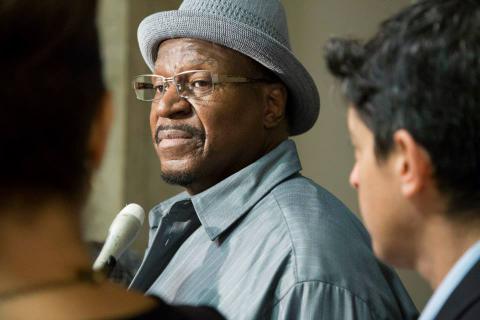 Victims of police torture by Jon Burge and his notorious “midnight crew” are one step closer to reparations today, as Mayor Rahm Emanuel agreed to a package deal for survivors which includes a $5.5 million dollar fund. Survivors of Burge and his men say they were subjected to a variety of abhorrent and brutal torture procedures when being questioned— most often for crimes they knew nothing about— including electro-shock, Russian roulette, mock executions, beatings and more. Burge and the midnight crew tortured suspects to extract false confessions, which landed several men on death row.

According to the deal, a now amended ordinance brokered by the People’s Law Office, Amnesty International, Project NIA, Chicago Torture Memorials and several other groups, some 118 victims of the former Area 2 Commander and their families will be eligible for financial compensation and other benefits. Additionally, the City will make a formal public apology and memorial to the victims.

"It's only now after decades of litigation, investigative journalism and organizing that the truth has come out,” said Joey Mogul, an attorney with the People’s Law Office. Mogul, several of Burge’s victims including Anthony Holmes and Darrell Cannon along with others, testified at a Finance Committee hearing today shortly after Emanuel made the announcement.

“I cry not because I’m hurt, but because I’m mad,” said a tearful Darrell Cannon before the City Council, as he described how officers took him to a location on the outskirts of the city and forced a shotgun into his mouth, making him believe they were going to execute him. Cannon spent 24 years in prison due to the false confession he gave police after they tortured him with mock executions like the one he described along with with a cattle prod.

Burge was never convicted of torturing suspects due to the expiration of the statute of limitations for his crimes. He, however, was convicted of perjury and obstruction of justice for lying about it and served four and a half years in prison.

That prison term after decades of silence and denial from the police and City government was little comfort to Burge’s victims and their families, who along with lawyers, advocacy groups and activists worked to make the historic reparations ordinance a reality. In addition to $5.5 million fund for eligible victims, the City will provide:

“Justice is more than achieving the legally correct outcome in a lawsuit,” said Steve Patton, Emanuel’s Corporation Counsel. “This is one of those cases that does that.” Patton told the packed hearing that he hoped the package would bring some measure of closure and close the book on a dark chapter in Chicago Police history.

Though the amount of money is significantly lower than the original $20 million organizers were calling for, the package itself is a historic victory. It is the first time a city has provided formal reparations for police violence. And Burge’s disgraceful legacy being discussed in an academic setting with students is a step in the right direction to making sure such things don’t continue to happen. “You have to behave differently with the police as an African American in Chicago because of this,” said Dorothy Burge of the group Chicago Torture Justice Memorials during her testimony. “This a way to begin to heal, to say the City recognizes and takes responsibility for its actions.”