‘By Blood’ Tackles the Untold Legacy of Slave-Owning Cherokees

“Victims can be perpetrators, too.” It’s important for people to understand that. 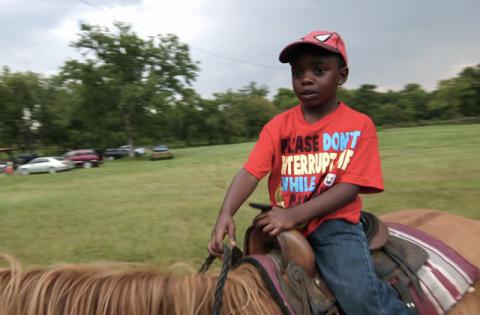 It’s an obscure part of antebellum history, but members of no fewer than five Native American tribes participated in chattel slavery. Before they were driven from their lands in what’s now known as the U.S. South, the Cherokee, Chickasaw, Choctaw, Creek and Seminole nations all had members who bought and sold black people as property.

In 1838 and 1839, when the U.S. government forced the Cherokee, the largest tribe, to relocate from their land east of the Mississippi River to what is now known as Oklahoma, enslaved black people, black spouses of Natives and mixed children joined them.

Some 30 years after this forced march that Natives called the Trail of Tears, the Cherokee Nation was divided by the Civil War. Some supported and even fought for the Confederacy, while others sided with the Union.

The Cherokee eventually signed the Treaty of 1866, an agreement with the federal government that granted enslaved black people who were freed voluntarily or by law "all the rights of the Native Cherokee." In addition, "all free colored persons" and their descendants who were living on Cherokee land or set to return in six months received these rights.

With a population about 300,000 members, the Cherokee Nation determines its citizenship not by blood quantum, but by whether an ancestor is on what’s called the Dawes Rolls. In those records black Cherokees were designated as Freedmen without consideration of their lineage. As a result, the tribe has always questioned their membership. In a 2007 special election that resulted in a change to the Cherokee constitution, a majority of voters chose to strip some 30,000 Cherokee Freedmen of their tribal citizenship. These Freedmen have lost access to the healthcare, education and housing benefits funded by the billion-dollar Cherokee casino industry.

The Cherokee Freedmen are the topic of a new documentary,“By Blood," which is on the festival circuit and due to hit select theaters in August. Colorlines spoke with Marcos Burbery who co-directed the film with Sam Russell.* Below is the interview condensed and edited for clarity.

A lot of non-Natives don’t know about this history. How well known is it in the Cherokee Nation itself?

So how did the special election to strip them of their citizenship come to be?

A very small percentage of the Cherokee Nation, less than 10 percent of the tribe, voted in the special election to kick the Freedmen out. It was mostly very conservative, politically involved [members] of the Cherokee Nation from one of 14 counties in Oklahoma. There’s a lot of history there, and it just so happens that some of the most politically involved Cherokee look really white.

There are lots of Cherokee who I’ve come across that appear traditionally Native. From what I’ve seen, they’re the ones who don’t have any involvement in the tribal politics—like, zero. So when critics say the Cherokee Nation’s racist, they’re making generalizations.

You do a good job at letting people speak for themselves. For the Freedmen and their supporters, it’s an issue of racial discrimination and equity. For Cherokee Nation leadership, it’s an issue of sovereignty—of the Nation's right to decide how to determine citizenship. How did you approach all of that?

It’s easy to get wrapped up in the emotion of the Freedmen’s plight and what they’re going through. But there’s this whole other side to it—and I don’t think the other side is all negative. There’s a huge history behind the Cherokee Nation being pillaged and taken advantaged of all these years. They certainly have a right to [claim] sovereignty. So I tried to stay away from being an advocate and I told everyone I interviewed that I was not there to take sides. I just wanted to do the story justice.

What did you set out to accomplish with "By Blood"?

I really wanted the film to be something the Cherokee Nation could stand by. It was pretty great and brave of them to allow me to interview their attorney general, Todd Hembree. I never took advantage of that or tried to cut any corners or make him sound like he was saying something that he wasn’t. But having said that, I think [our job] is to connect the dots. And having worked on this since 2011, there’s a part of me that thinks the truth of the matter is that the Freedmen were used as a political wedge issue. There were certain [Cherokee] politicians who wanted to gain control and they saw this as an opportunity to try to inspire people to vote for them.

I think it’s emblematic of what’s happening around the country. In the last six months or so, we’re seeing manifestations of race as it relates to police brutality, all around the country. We have to understand African-American history and I think part of the reason I’ve been so fascinated with this story is that it’s been excised from our historical narrative. It begs the question: Why?  Why is it that everyone I talk to about this film don't know about Native Americans owning slaves?

At some point in the film, [former U.S. Rep.] Barney Frank says, “Victims can be perpetrators, too.” It’s important for people to understand that.