AFL-CIO Report: The High Toll of Job Injuries and Deaths

In its expansive report, the AFL-CIO reports 4,585 U.S. workers were killed on the job and 50,000 died from occupational diseases in 2013. U.S. workers suffer from 7.6 million to 11.4 million injuries each year. Workplace violence continues to be the second leading cause of job fatalities, with women workers suffering 70% of the lost-time injuries related to workplace violence. Latino workers continue to be at increased risk of job fatalities. 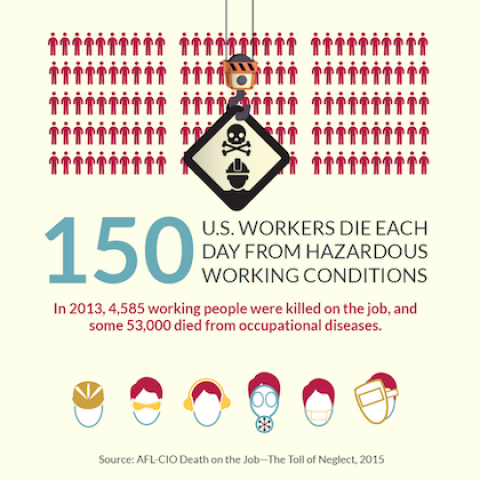 The 2015 edition of AFL-CIO’s Death on the Job is the 24th report the AFL-CIO has produced on the state of safety and health protections for U.S. workers. ,AFL-CIO

This 2015 edition of  Death on the Job: The Toll of Neglect  marks the 24th year the AFL-CIO has produced a report on the state of safety and health protections for America’s workers.

More than 510,000 workers now can say their lives have been saved since the passage of the Occupational Safety and Health Act of 1970, which promised workers in this country the right to a safe job. Since that time, workplace safety and health conditions have improved, but too many workers remain at serious risk of injury, illness or death.

Many preventable workplace disasters do not make the headlines, and kill and disable thousands of workers each year.

The High Toll of Job Injuries, Illnesses and Deaths

In 2013, 4,585 workers were killed on the job in the United States, and an estimated 50,000 died from occupational diseases, resulting in a loss of 150 workers each day from hazardous working conditions.

Nearly 3.8 million work-related injuries and illnesses were reported, but many injuries are not reported. The true toll is likely two to three times greater, or 7.6 million to 11.4 million injuries each year.

The current level of federal and state OSHA inspectors provides one inspector for every 71,695 workers.OSHA penalties have increased under the Obama administration, but still are too low to deter violations. The average penalty for a serious violation of the law in FY 2014 was $1,972 for federal OSHA and $1,043 for the state plans.

Criminal penalties under the OSHA law are weak. They are limited to cases in which a willful violation results in a worker death, resulting in misdemeanors. Since 1970, only 88 cases have been prosecuted, with defendants serving a total of 100 months in jail. During this time there were more than 390,000 worker deaths.

After eight years of neglect and inaction under the Bush administration, progress in issuing new needed protections under the Obama administration has been slow and disappointing. The Office of Management and Budget (OMB) has blocked and delayed important rules. Since 2009, only four major final OSHA safety and health standards have been issued.

In 2013, this de facto regulatory freeze began to thaw. The proposed tougher silica rule that had been blocked by OMB for two-and-one-half years was released. When finalized,this new rule will prevent 700 deaths and 1,600 cases of silica-related disease each year.

But many rules are long overdue, including OSHA rules on confined space entry in construction, beryllium, combustible dust and infectious diseases, and MSHA’s rule on proximity detection for mobile mining equipment.

The Republican majority in Congress is trying to stop all new protections and prevent these important measures from becoming law. It is critical that the Obama administration finalize the OSHA silica standard and other key rules as soon as possible so the president can veto any legislation designed to delay or overturn these measures.

Much Work Remains to Be Done

The nation must renew the commitment to protect workers from injury, disease and death and make this a high priority. We must demand that employers meet their responsibilities to protect workers and hold them accountable if they put workers in danger. Only then can the promise of safe jobs for all of America’s workers be fulfilled.