How Black Women Can Rescue the Labor Movement

The report, “And Still I Rise: Black Women Labor Leaders’ Voices, Power and Promise”—named for a poem of resilience by the late Maya Angelou, could not be more timely, since events in Baltimore in the wake of the death of Freddie Gray after being in police custody have shed light on the hopelessness that can result in cities when jobs disappear and communities such as West Baltimore are left behind.

May 5, 2015 Kimberly Freeman Brown and Marc Bayard The Root
Printer friendly
How Black Women Can Rescue the Labor Movement Published May 5, 2015 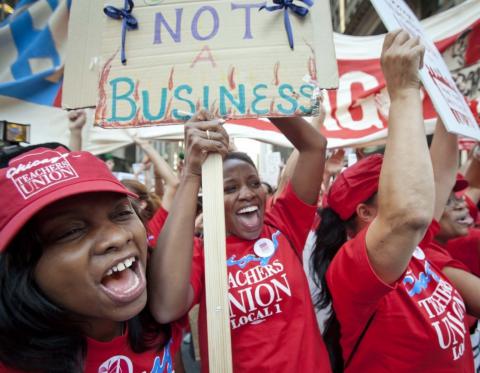 Public school teachers cheer as Chicago Teachers Union President Karen Lewis, unseen, arrives to address a rally of thousands of teachers gathered for the second consecutive day outside the Chicago Board of Education.,AP Photo/Sitthixay Ditthavong

After spending more than 25 combined years promoting the trade union movement and protecting the right to organize in the United States and around the world, we see the report “And Still I Rise: Black Women Labor Leaders’ Voices, Power and Promise”—named for a poem of resilience by the late Maya Angelou—as a love letter of sorts.

First and foremost, it is a love letter to the black women in labor within its pages and to their sisters all over the nation who do not yet have unions. They are the grandmothers and mothers who sit regally in church pews each Sunday and who invisibly clean homes Monday through Saturday. They are our Southern aunts; our African, Afro-Latina and Caribbean-born sisters and cousins who work hard on the job and harder at home to make sure that their children’s dreams are less deferred than their own. And they are tried and tested labor activists who break down barriers and work to build a better economy for one another and for all workers.

The report could not be more timely, since events in Baltimore in the wake of the death of Freddie Gray after being in police custody have shed light on the hopelessness that can result in cities when jobs disappear and communities such as West Baltimore are left behind.

“And Still I Rise” gives the 27 amazing women we interviewed and the 467 who responded to the Institute for Policy Studies’ national survey of black women in labor an opportunity to explore this question: Why has the organizing success of black women not resulted in more black women serving in leadership positions that help shape the direction of the labor movement? More important, their answers may show the labor movement a way forward.

The report is organized around three emerging themes—leadership, organizing and policy issues of concern to black labor women—and reflects the women’s unique position at the nexus of race, gender and class. More than giving a critique of what is wrong, the women offer insights into winning organizing strategies, ways to build power by linking arms with others, the value of opening opportunity to black women in nontraditional fields, and what happens when white allies use their position and power to make room for the leadership of black women to emerge.

The roles that African Americans play in their families and communities, on the job and in their unions are acts of resistance against the staggering inequality they face on a daily basis. The statistics regarding African-American wealth and wage inequality, unemployment, mass incarceration, police brutality and poverty are daunting. To cite just one, as of March 2015, the black unemployment rate (10.1 percent) was more than double the white unemployment rate (4.7 percent).

Second, this report is our love letter to the labor movement—offering sometimes tough, but always unflappable, affection. We know what some may have forgotten: that if you are concerned about the economic advancement of black women, families and communities, you must think twice before you dismiss the value and importance of the labor movement.

Many of our years working within the labor movement have been spent convincing people—policymakers, progressive friends and disillusioned black workers—of labor’s virtue. For some, personal experiences or secondhand knowledge of racism and sexism within unions has been enough to cause them to back away. Others, especially young people, are ambivalent because they do not know people who belong to unions.

In many ways, these realities bear witness to the distance that labor still has to go in finding authentic ways to root out persistent discrimination and inequality within and to build true partnerships.

Despite the tremendous potential of widening leadership opportunities for black women, one of the biggest challenges of this project has been convincing potential supporters of the value of focusing on black women. “Why not women of color or all women?” was a common question we were asked by both progressive allies and conservative advocates over and over again. Sadly, the question reinforces an often unconscious, but deeply held and historic belief that the experiences of black women are not important enough unless attached to others.

We decided to focus on black women because we know that they are, and have always been, “the miner’s canary” for workers in America. Black women have experienced for decades many of the economic and social ills now faced by others. Making black women whole raises the floor for all women—and likely for all workers.

Groundbreaking research about the effectiveness of black women’s leadership in union organizing can now be joined with first-person narratives and a summary of the national online-survey results. The report concludes with a series of recommendations to move the ideas to action. At the top of the list is a call for greater investment in organizing more black women into unions and community organizations focused on economic justice and workers’ rights.

It will be these actions, matched with the tenacity and passion of black women for building a better world, that will fulfill the hope of Maya Angelou’s words.

The Root aims to foster and advance conversations about issues relevant to the black Diaspora by presenting a variety of opinions from all perspectives, whether or not those opinions are shared by our editorial staff.

Kimberly Freeman Brown is president of KFB Consulting LLC, a management-consulting firm that supports leading progressive leaders and advocacy and political organizations. Marc Bayard, an expert on labor, civil rights and racial-justice issues, is an associate fellow and the director of the Black Worker Initiative at the Institute for Policy Studies and a Public Voices fellow of the OpEd Project. Join the “And Still I Rise” Twitter town hall May 1 at 12 p.m. by following the hashtag #AndStillIRise on Twitter.