Each term my film students watch Spike Lee’s Do the Right Thing (1989). And each term they react similarly to the scene in which Mookie (Spike Lee) throws a trash can, igniting a neighborhood riot by breaking the window of the pizzeria where he works. Most students of color feel Lee’s character did the right thing while the majority of white students cannot understand why Mookie would do such a thing to his boss. Why this reaction—term after term, year after year? 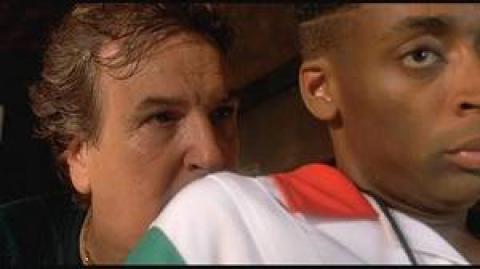 Spike Lee and Danny Aiello in "Do the Right Thing" , dvdtalk.com

Each term, my film students watch Spike Lee’s Do the Right Thing (1989). And each term, they react similarly to the scene in which Mookie (Spike Lee) throws a trash can, igniting a neighborhood riot by breaking the window of the pizzeria where he works. Most students of color feel Lee’s character “did the right thing” while the majority of white students cannot understand why Mookie “would do such a thing to his boss.” Why this reaction—term after term, year after year?

Like most of Spike’s Lee’s films, Do the Right Thing challenges viewers. For starters, Lee consistently rams together the conflicting ideologies of Malcolm X (violence as self-defense and when necessary) and Martin Luther King, Jr. (always non-violence) without explicitly informing the spectator which is the better choice. What’s more, the large cast—compiled mostly of secondary characters—theoretically uneases filmgoers since Hollywood normally offers only two or three leads for us to follow.

But undoubtedly, it’s Lee’s characterization of Italian-American pizzeria owner, Sal (Danny Aiello), and Mookie’s decision to hurl that trash bin into Sal’s restaurant window that challenge many viewers. Is Mookie doing the right thing here? Is he not?

But as Dan Flory points out in “Spike Lee and the Sympathetic Racist,”* perhaps there is a tad of truth to this rather naïve assessment about identification and audience reception.

Spike Lee has said he wrote Danny Aiello’s Sal as a racist. Aiello, however, interpreted his character otherwise. “He’s a nice guy,” Aiello claims, “and he sees people as equal.” Aiello further points out that in the film’s climatic scene—when he destroys the boom box of Radio Raheem (Bill Nunn)—Sal has to look deep inside himself “to find the most insulting words he could to throw at those who made him angry.” As a result, Aiello argues, his character “ends up acting like a racist, even though he is not one.” It appears many of my white students make similar conclusions.

But as Dan Flory points out, several anti-black cues pepper Sal’s actions and speech, each of which should make viewers think twice about Aiello’s interpretation. For instance, Sal refers to his black customers as these people, language that distances himself from them and, in essence, “others” them. Similarly, in two scenes, Sal wields a baseball bat—a symbol of white-on-black violence in the 1980s. Moreover, Sal insults his black patrons with terms like jungle music, Africa, and niggers.

Finally, Aiello’s character reacts indifferently to Radio Raheem’s murder by uttering to the growing multiracial crowd around him, “You do what you’ve gotta do.” With such vitriolic words and actions on display one wonders why many of my students, mostly white, don’t (initially) see Sal as a racist.

Flory has a valid answer to this question: because of their life and viewing experience, non-white viewers form “a critical sense of race or double consciousness merely to function and survive in cultures like America’s.” In other words, my students of color possess a more “finely tuned racial awareness” than (most of) their white classmates.

Conversely, white viewers have difficulty “imagining their whiteness from the outside.” They are rarely asked to look at their whiteness critically and, furthermore, their life and viewing experiences have not required them to develop such forms of cognition. Consequently, when called upon to question and/or recognize such issues—as is the case with Do the Right Thing—my white students often find it challenging, even though they may not know why.

For white viewers to see Sal as a racist, they would be required to make “a disruptive change in their system of belief"—an ideology that already (although unconsciously) privileges “aspects of white advantage and power.” So rather than seeing Sal as racist and problematic, many white audiences view him as empathetic and morally good. Nonwhite audiences, on the other hand, see a character that represents—as is doubtless Spike Lee’s goal—a more realistic, more complex perspective on race.

While I agree with Flory’s conclusions here, I want to clarify one thing: neither Flory nor I believes white viewers are somehow incapable of analyzing a complex text like Do the Right Thing. Certainly not!  At the same time though, for nearly ten years the majority of my white students have read the character of Sal and Mookie’s decision to throw the trash can somewhat simply, which suggests there’s still work to be done.

[Kelli Marshall teaches courses on Seinfeld, stand-up comedy, 1980s flicks, Quentin Tarantino, and other fun stuff at DePaul University. When she's not teaching or live-tweeting Scandal and The Walking Dead, Kelli researches two rather disparate fields: Shakespeare in film and popular culture, and the film musical, specifically the star image and work of Hollywood song-and-dance man Gene Kelly. Her work has appeared in The Week, AlterNet, FlowTV, Literature/Film Quarterly, and other mainstream and academic publications.]