Why White Americans Don't Believe in 'Personal Accountability' for Police

Whatever the explanation, there is a bewildering disconnect between white tolerance of police misconduct—including homicides—and the call for “personal accountability” that has long permeated our national policy discussions.

May 14, 2015 James Thindwa In These Times
printer friendly 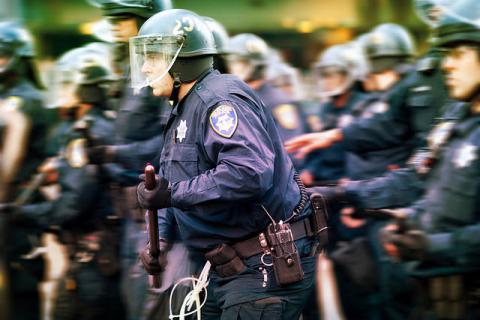 By a margin of 41 percent to 34 percent, white Americans say police treat African Americans and white people equally, according to a YouGov poll conducted 11 days after Freddy Gray’s death. African Americans, however, overwhelmingly—76 percent to 13 percent—said that cops treat them unfairly.

The responses of white Americans are unsettling in light of the seemingly endless video accounts of racially tinged police violence circulating online, the millions of dollars cities have paid to settle police brutality lawsuits, and the many studies that have demonstrated a racial bias in policing.

A disturbingly large number of white Americans, it seems, willfully dismiss the evidence. Perhaps their own relatively uneventful contact with police provides comfortable distance and deniability. Or maybe white America has been swayed by persuasive and powerful counternarratives, especially from conservative media.

Whatever the explanation, there is a bewildering disconnect between white tolerance of police misconduct—including homicides—and the call for “personal accountability” that has long permeated our national policy discussions. Championed by conservatives and furthered by liberal elites wary of social justice, “personal accountability” has been elevated to a national religion. In the 1990s, with full cooperation by the Clinton administration, this rhetoric was used as a cudgel against the poor in order to pave the way for draconian welfare reforms, packaged as “The Personal Responsibility and Work Opportunity Reconciliation Act of 1996.” The same dogma helped justify the “three strikes you’re out” and “mandatory minimums” policies that fueled the country’s racist and expensive incarceration frenzy. Today, politicians brandish the term to demand drug testing for poor recipients of public aid and to cut social programs that help the needy.

Most recently, “personal accountability” has been deployed against public school teachers, to devastating effect. George W. Bush charged that too many teachers were incompetent, and famously accused them and others in the education system of practicing a “soft bigotry of low expectations.” That bigotry, he said, contributed to black academic underachievement and the persistence of a “racial gap” in academic outcomes.  Of course, Bush’s analysis was flawed, for it ignored the outsized role of poverty in shaping educational outcomes. Nevertheless, “soft bigotry” became the lingua franca of education discourse in Washington, enabling the institution of strict “teacher accountability” standards enforced by the high-stakes testing of No Child Left Behind (NCLB) and other measures. President Obama followed with his Race to the Top, which Georgetown law Professor Jonathan Turley has dubbed “NCLB on steroids.” The narrative of “bad teachers” has only gained traction: A 2010 Newsweek article proclaimed, “In no other profession are workers so insulated from accountability.” Of course, no one who has followed the national scandal of police impunity, or similarly Wall Street executives, will believe that.

However, the nation’s police forces are indeed insulated from the fervent national demand for “personal accountability.” White America has set a very low bar for police accountability: Police can gun down a fleeing black man, a black boy playing with a toy gun, a black Walmart customer holding a fake gun he’d purchased at the store, and a naked, mentally disturbed and unarmed black man. They can choke to death a black street peddler, and let die a distressed, handcuffed black man as he begged for help. And still, majorities of white people believe police treat black people “fairly”?

What explains white America’s indulgent attitude towards the homicidal tendencies of so many police? Where is the clamor for “personal accountability” that has been directed at poor black people and public school teachers? Why don’t white Americans who fulminate about both high taxes and “personal accountability” demand the removal of cops whose conduct has become expensive and disgraceful?

The answer, of course, is that the dogma of personal accountability was never an honest critique, but a ploy to serve conservative racial and political goals. It targets poor black people, who don’t produce votes for the GOP but can be used as fodder for its race-baiting electoral strategy. It targets teachers and their unions, who represent the last remaining barrier between the billions spent on public education nationwide and the corporate shysters trying to get at that money through privatization. Media tycoon Rupert Murdoch, for example, called public education a “$500 billion sector … that is waiting desperately to be transformed,” and Andy Smarick, former COO of National Alliance of Charter Schools, calls for “replac[ing] the district-based system in America’s large cities with fluid, self-improving systems of charter schools.”

Police are not the only group given a pass by the personal accountability jihadists. During the financial crisis, few, if any Fox News’ elite commentators ever bemoaned the lack of “personal accountability” by Wall Street bankers whose reckless conduct crashed the economy. Calls to drug-test recipients of government aid exclude CEOs of companies that get tax breaks and other public subsidies. Nor did conservatives call for CEO accountability when 15 workers were killed in an explosion at a fertilizer plant in West, Texas in 2013; or when 29 miners died in a preventable explosion at Upper Branch mine in W.VA (CEO Don Blankenship was later indicted); or when—in a catastrophe that experts deemed foreseeable—11 workers perished after BP’s Deepwater Horizon exploded in 2010, causing the worst environmental disaster in U.S. history. And despite the many calls for accountability in education, no pundits have seized on the fact that, according to the Center for Media and Democracy, the U.S. government has given away more than $3.3 billion to the charter school industry over the past 20 years with no conditions.

Though calls to fire “bad teachers” are contrived to serve ideological goals while  ignoring the socioeconomic conditions that impact learning, teacher unions such as the American Federation of Teachers (disclosure, I am an employee) have nevertheless responded. The AFT has taken measures to ensure the proper balance between due process rights and the need to facilitate removal of personnel deemed unsuitable for the job. As a general matter, accountability is a noble concept without which institutions cannot function. What is troubling about police unions’ response to violence is that, in reflexively declaring the innocence of their accused comrades, they take a contemptibly dismissive posture regarding the concerns of countless fellow citizens who’ve joined in protest. In the case of 12-year-old Tamir Rice, union leaders went further and blamed the kid for causing his own death. Without exception, there is not a moment of self-reflection by the largely white union leadership, or any attempt to understand the grievances of African Americans. Police unions give unions a bad name and reinforce the worst perceptions of unions. Tragically they are doing so at a time many unions and community organizations nationwide are building vibrant and progressive labor-community coalitions.

It is just as troubling that many white Americans are complicit in an ideologically ginned up crusade about “personal accountability.” For if they were sincere, this would be the moment—as black lives are snuffed out by police—for accountability crusaders to step up and say enough is enough! Worship of law enforcement, which seems to have reached a fever pitch, especially within the American Right, is not healthy for democracy. Suspicion of state power—at times a redeeming feature of conservatism—has been compromised at the altar of racial and political ideology.

To his credit, conservative writer Leon H. Wolf  dissented from this culture of cop worship. “Many Conservatives are Blowing it on the Ferguson DOJ Report ” was the title of his scathing critique posted at Redstates.org. Citing the Department of Justice’s report on Ferguson, Wolf cautioned, “No conservative on earth should feel comfortable with the way the Ferguson PD has been operating for years, even according to their own documents. ” Among the DOJ findings Wolf cited was the fact that between October 2012 and October 2014, African Americans accounted for 85 percent of the 11,610 vehicle stops reported by Ferguson police, though they make up 67 percent of the population. Whites, who represented 29 percent of the population, made up 15 percent of stops.

It is hoped that the many white Americans swept up in the national denial of police brutality against their fellow citizens will face the ever-mounting evidence and demand stricter police accountability. White America must stop letting reverence for law enforcement distort their perceptions and start believing that black victims of police brutality aren’t making this stuff up.

[James Thindwa is a member of In These Times' Board of Directors and a labor and community activist.]