A number of Portside readers has asked us to share information about panels they are participating in with other readers. Some of the panel participants include moderators of Portside.(Full conference program includes 400 panels, workshops and events.) The 11 panels below may be of particular interest to Portside readers. 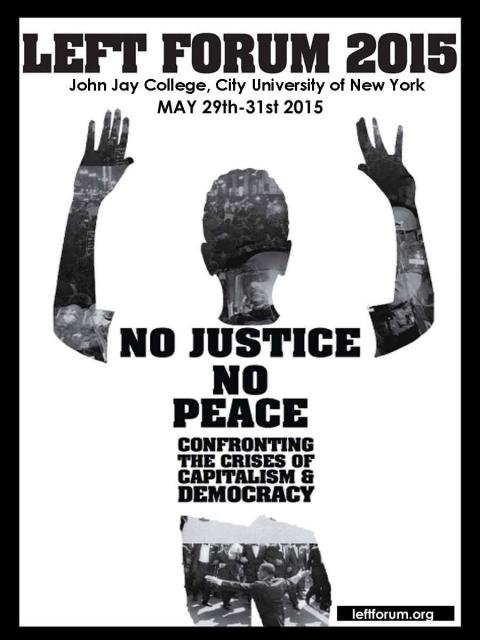 A number of Portside readers has asked us to share information about panels they are participating in with other readers. (Some of the panel participants include moderators of Portside.)
Again, here is the link for the full conference schedule, but these are panels that some Portside readers will be on:

This panel opens the Left Forum!

A conversation, with panel and participants, about where the Internet will be in 5 years, where it should be and how do we get it there. Sponsored jointly with the International Network of Scholar-Activists (InoSA). Panel is international and most of it remote.

#BlackLivesMatter - Now What Is To Be Done?

The continuation of racist police murder and the mass uprisings in Ferguson, MO and elsewhere have opened possibility for new political vistas among families and communities seeking justice. While there are still calls for reformist action -- "sensitivity training", civilian review boards, body cameras, more officers of color, and other adjustments to policing persist --, these occur against a new backdrop of demands for more fundamental change, embodied in the now commonplace refrain - "the whole system has to be changed." Our panel will attempt to tease out the nascent and implicit tension between reform and revolution in the #blacklivesmatter movement. With due humility we seek to gather voices from the academy and beyond to strategize about next steps for this movement by linking today's struggles with the long arc of twentieth century revolutionary struggle against capitalism as well as by assessing capitalism's ability to continue to absorb challenges from the left through force and deception.

The Confiscation of American Prosperity

How was the depression engineered? Did Piketty miss the problems of finance capitalism? Capitalism: Will it go away with a bang or a whimper? Is this capitalism's final conflict? And what comes next?

The Great War in Marxist Perspective

Investigating the historical, political, and broadly cultural ramifications of World War 1, the panelists emphasize its connections with wartime and postwar movements ranging from the fight against Jim Crow to Caribbean anticolonial rebellion, from the Bolshevik Revolution to the rise of Fascism.
Sponsoring Journal: Science & Society

The crisis of U.S. capitalism has now reached a critical stage. The economy is in inescapable crisis. The government is dysfunctional, state violence and militarism are escalating and moving toward fascism. Climate change now threatens tens of millions of lives in this country alone. Our movement must be prepared to face these challenges and take advantage of these opportunities. The U.S. Social Forum is planning another in 2015. But this one is different from those of 2007 and 2010. It is several simultaneous, technologically-linked gatherings in various parts of the country united by their discussion of these crises, visions, and actions and strategies. The Northern East Coast convergence is taking place in Philadelphia, PA, the West Coast convergence in San Jose, CA, and several PMAs in the South. Forum organizers will lead a conversation about what the Forum plans, what it should do, and how you can be involved in it.

Chair/Facilitator:  Jerome Scott -- League of Revolutionaries for a New America

The panel will explore the ramifications of the recent development to normalize relations between Cuba and the United States. After 50 plus years of antagonism, the announcement to move towards normalization came as a welcome and surprising new change. Examining the complexities, the panel will discuss the effect this new relationship will have on Cuba's movement towards a 21st Century socialism, the updated regulations for Americans who want to travel to Cuba, as well as the opportunities for American businesses to enter into the once-forbidden market. Will the possibility of McDonald's in Old Havana change Cuba for the better or worse? A major topic of discussion will be the rationale behind President Obama's decision to charter a new path towards Cuba, and does it simply mean American is pursuing a new strategy of 'regime change.' Panelists include University of Toronto lecturer and author Keith Bolender, historian and Cuban expert Jane Franklin, Bob Guild of Marazul Travel the leader in US travel to Cuba, and Ariel Hernandez, First Secretary to the Permanent Mission of the Republic of Cuba to the United Nations.


The New Stage in Cuban/U.S. Relations: What Has and Has Not Changed

The declarations of President Obama and President Raul Castro on December 17, 2014 to begin talks to restore diplomatic relations and normalize ties between both countries after half a century constitutes a new stage in their disputatious history since the 1959 Revolution. The panel will report on where the negotiations stand and provide the historical context for understanding the likelihood of success given Cuba's insistence on its right to defend its Revolution and Washington's still extant desire to overthrow it.
Sponsoring Journal: Science & Society

This panel will discuss the critical notion of internal relations as a part of dialectics and how this notion is critical to political practice aimed at fundamental social change. The social sciences developed under capitalism are based on a rigid conceptualization that treats as given, natural, and eternal what is mediated, relational, and contingent. Undermining such rigid conceptualization is fundamental to Left practice and should be a major task in our practice as scholars.
Sponsoring Journal: Science & Society

Communications technology enhances our abilities to communicate and collaborate across distance, but our access to the Internet and its freedom and security have been increasingly threatened by encroaching state surveillance and privatization. While scholar-activists must be among the leadership of the movement defending the internet and its content as public goods, many of us remain uninformed about the ways our struggles for economic and social justice are challenged by the changing political and technological landscape. This panel comprised of scholar-activists will focus on the major issues affecting internet freedom and access to knowledge -- including net neutrality, state surveillance, free and open source software, and open access publishing -- as well as the responses by social movements to these challenges and the strategies for preserving and protecting our shared communications infrastructure and the knowledge commons.

This panel is organized as a discussion of some encounters between Marxism and anarchism, and, hopefully, as itself such an encounter. Marxists and anarchists have often found themselves engaged in struggles, both against common enemies, and, sometimes, against each other. The recent efflorescence of street protest and popular anti-austerity anger under the aegis of Occupy is only the most recent occasion for such struggle. What are the real theoretical differences and what, if any, prospects for united action exist for these left tendencies? What lessons for a viable 21st-century left movement can be found in the Marxist-anarchist debates?
Sponsoring Journal: Science & Society