In Andrew Niccol's 'Good Kill', fresh from his Oscar-nominated role in Boyhood, Ethan Hawke portrays pilot Major Tom Egan, who, after repeat combat tours flying over the Iraq and Afghan theaters of conflict, is now stationed outside Las Vegas, where he is deeply conflicted by his role in the UAV liquidation-by-remote-control project. 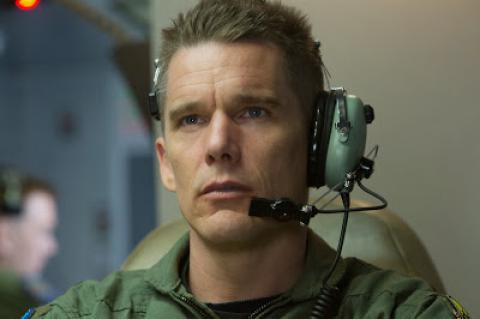 In 2013 this reporter interviewed CodePink co-founder Medea Benjamin, author of Drone Warfare, Killing by Remote Control, who asserted: “There were between 46 and 52 drone strikes under the Bush administration. And now there are over 400 -- that’s not counting Afghanistan.

Now a feature film has been made with major Hollywood talents dramatizing the dubious Unmanned Aerial Vehicle program and the controversies surrounding it. New Zealand writer-director-producer Andrew Niccol’s Good Kill is a hard hitting, thought provoking movie exposing and opposing drone warfare in Afghanistan and Yemen. Fresh from his Oscar-nominated role in Boyhood, Ethan Hawke portrays pilot Major Tom Egan, who, after repeat combat tours flying over the Iraq and Afghan theaters of conflict, is now stationed outside of Las Vegas, where he is deeply conflicted by his role in the UAV liquidation-by-remote-control project.

From the relative comfort of an air conditioned trailer in a military base at the Nevada desert the droners wreak Hellfire havoc on targets in deserts half a world away. The fetching if kvetching Zoe Kravitz (Mad Max: Fury Road, Insurgent, X Men: First Class), daughter of Lenny Kravitz and Lisa Bonet, plays fiery Vera Suarez, a Latina Air Force officer who has qualms after she joins the UAV team at the Nevada air base.

What Suarez bellyaches about are the moral implications (or lack of) of droning, which according to the movie (and Medea) is an imprecise method of murder which inevitably results in “collateral damage” -- including the deaths of unarmed civilians, among them, alas, children, women and the aged. According to the film, this killing of casualties, whose only crimes are being at the wrong places at the wrong times, is acceptable to the CIA. You know, that U.S. organization (your tax dollars at work, my Fellow Americans!) that LBJ called “Murder Incorporated” (hey, it takes one mass murderer to know another!), which has overthrown democratically-elected governments from Iran to Guatemala to Chile, etc., tortured more dissidents than the Spanish Inquisition, and so on.

Suarez denounces the CIA-directed droning of non-combatants, as U.S. "terrorism" and a "factory creating terrorists," because of the widespread anger and blowback these killings provoke and spread. During one testy trailer exchange with her commanding officer, Lt. Colonel Jack Johns (Bruce Greenwood) Suarez cheekily asks: “Was that a war crime, Sir?” To which Johns replies: “Shut the fuck up, Suarez!”

His conscience troubled, Major Egan can no longer “keep compartmentalizing,” as Lt. Colonel Johns advises. He has a drinking problem and his marriage to Molly (January Jones) is, like his liquor, on the rocks. Like Jeremy Renner’s lead character in 2010’s Best Picture Oscar winner, The Hurt Locker (co-produced by Nicolas Chartier and Zev Forman, who also co-produced the far superior war film, Good Kill), Egan has difficulty making the transition from the combat zone to the home front, although he is still at war, “taking potshots” at people across the globe being surveilled by remotely piloted aircraft with their lethal payloads.

But unlike The Hurt Locker’s PTSD-ed, traumatized psychopath, Egan finds a path back to his sanity. It’s a similar route blazed by veterans such as the courageous Ron Kovic, whom Tom Cruise depicted in Oliver Stone’s 1989 anti-war classic, Born on the Fourth of July: Taking a stand against orders to shoot Hellfire missiles from a drone at civilians.

Perhaps Zim is one of the “gamers” whom the Pentagon recruits for its UAV program, which appears to play out like a videogame (albeit one with extraordinarily high stakes involving life and death). The Las Vegas vibe and backdrop enhances the sense of the inherently risky nature of drone warfare. Good Kill’s aerial footage, apparently shot in Morocco, has the look and feel of a videogame as it simulates what the Nevada-based airmen-turned-chairmen see on their computer screens as these not-so-Big Brothers watch Afghans and Yemenis from seats in their air conned trailer. This cinematic technique has a Brechtian alienation feel, as it distances film viewers from the actions, and Good Kill’s combat isn’t as viscerally exciting as that depicted in more conventional, pro-war flicks, like American Sniper or John Wayne’s Sands of Iwo Jima.

But that’s because Good Kill is an anti-war work of art that wants audiences to use logic and reason, not just emotion, when assessing the story onscreen.

[Ed Rampell is a Film historian and reviewer.  His interview with legendary Greek director Costa-Gavras appeared in The Progressive Magazine. Rampell is the co-author of The Hawaii Movie and Television Book.]