labor At Fight for $15 Convention, A Call from Clinton but Little Talk of Union

The still fledgling campaign focuses on organizing to raise wages and delays question of union structure. No one seems sure about the shape of a fast-food union. Many formations are possible. Since wages and other employment laws differ by city and state, one could envision local or regional contracts that establish a basic compensation structure, benefits and freedom from arbitrary firing. A more ambitious version would be national in scope: a framework agreement... 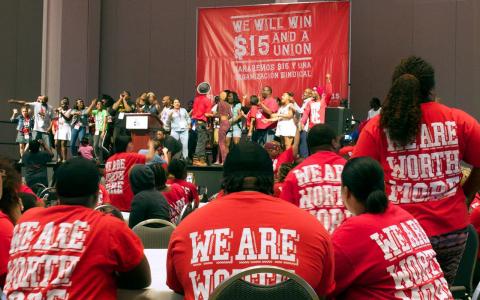 Detroit - Day two of the national Fight for $15 convention began with a surprise: a phone call from Hillary Clinton to a buoyant crowd of an estimated 1,300 fast-food workers.

"Thank you for marching in the streets to get that living wage," she said Sunday morning over the ballroom speakers. "No one who works an honest job in America should have to live in poverty. We need you out there, leading the fight against those who would rip away Americans' right to organize."

For the low-wage fast-food workers in attendance, Clinton's remarks and implicit appeal for votes were further proof that they are winning. As Mary Kay Henry, president of the 2.2 million-member Service Employees International Union (SEIU), which sponsors Fight for $15, said from the stage, "Powerful people all over the world are listening to you."

Back in 2012, when a handful of McDonald's and other franchise employees in New York City launched a one-day strike, the incipient movement's two demands - $15 and a union - seemed equally improbable. Yet in many cities and states, there's since been substantial legislative progress toward the first, numerical goal.

The second goal of a union remains distant and abstract. Fight for $15 currently lacks a definable membership, collective bargaining agreement or dues-paying structure. It instead proceeds in the style of worker centers: neighborhood-based, nonprofit labor groups that earned a reputation, beginning in the 1990s, for using street actions and media to assist low-wage laborers.

There is a national organizing committee comprising around 26 fast-food workers who convene by phone once a month. But, a campaign ally - who asked to remain anonymous for fear of retaliation - said, "They are spokespeople, not representatives."

"[The organizers] make the decisions. We just give opinions," said Tamika Jackson, a veteran cashier at McDonald's in Milwaukee. She meant this not as a critique, however, but as a compliment to Fight for $15. "The organizers run things, but I stand beside them 100 percent. They ask our opinion and see how many people want to [protest]." Jackson, who belonged to a union as a factory worker in Tennessee, said she will continue pushing for one in fast food.

According to Norma Barragan, lead organizer with SEIU Local 521 in California, the building blocks of a restaurant union are there. "Right now, we're taking baby steps. We have to figure out how to approach so many people," she said, referring to the 3.6 million fast-food workers employed in the U.S. "I think it's happening. Two or three years ago, workers had no idea what's going on. Now we have a convention with a lot of people willing to learn."

No one seems sure about the shape of a fast-food union. Many formations are possible in theory. Since wages and other employment laws differ by city and state, one could envision local or regional contracts that establish a basic compensation structure, benefits and freedom from arbitrary firing. The more ambitious version would be a national in scope: a framework agreement that binds franchisees as well as corporate headquarters.

"My mom always used to tell me it's better to be under a union because it protects you," said Ellington Summerour, an 18-year-old from Detroit who works two low-wage jobs - one at a bagel shop and another at a garden store - and will enter Ohio-Wesleyan University this fall. The fast-food union should be national, he said, "because there are so many of them. If you have a union one by one, somebody could have different rules."

Judging from Fight for $15's strategy to date - which includes a cluster of National Labor Relations Act cases alleging that McDonald's Corp. is as much an employer as its individual franchisees - the campaign would clearly prefer a national union. A McDonald's representative was not available to offer comment.

Right now, the movement lacks the democratic structure needed to bargain at a nationwide level. As one SEIU organizer not authorized to speak on the record queried, "If McDonald's were to make an offer tomorrow, who would decide whether to accept?"

This central question was hardly asked, let alone answered, in Detroit. National fast-food unions do exist in other countries, though, thanks to "minority-unionism" laws that allow as few as two coworkers to join a union on their own.

At the convention in Detroit, Michelle Hooper, a McDonald's worker from Auckland, New Zealand, represented the Unite Union, which negotiates countrywide contracts with multinational chains. The same is true in France, where the General Confederation of Labor (CGT) bargains for thousands of McDonald's workers. In South Korea, the small Arbeit Workers Union of McDonald's part-timers is pushing for an increase from $5 to $10 per hour, modeled after the U.S. Fight for $15.

"Look at Walmart. It's unionized in most places in the world and not here," said Stephanie Luce, professor of labor studies at the Murphy Institute, City University of New York. "But a lot of activists in other [more union-friendly] places are inspired by seeing fast-food workers strike [in the U.S.]. They see it as a more militant, active movement."

As Fight for $15 matures, it will need to tackle headier questions of union structure, Luce said: "What's the mechanism deciding who gets to say? When strikes happen, how long do you stay out?"

"We asked the same questions back in the day [on the child-care campaign]," said Barragan of SEIU Local 521. "In some states, it took 10 to 15 years to get a contract. But all these states - New York, Illinois, New Jersey and others - now have one. Even the providers themselves never thought we'd get to that point."