Turkey's AKP Doomed by Poverty, Growing Inequality and Its War on Trade Unions

Backdrop to Turkey's elections: Turkish workers have seen their unions dismantled under the AKP government, and many have lost collective bargaining rights. The percentage of unionized workers fell from 57.5 in 2003 to just 9.68 percent today. The Syrian war is not popular with the average Turk. The Army opposes any involvement in Syria, because it sees nothing ahead but a quagmire that would ally Turkey with the al-Qaeda-linked Nusra Front. 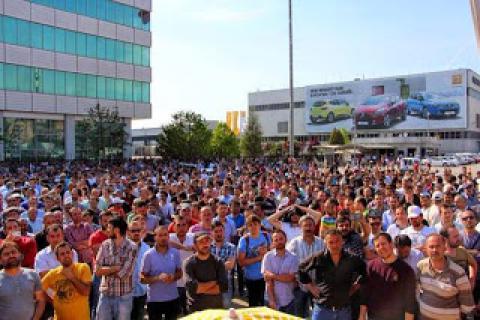 Turkish autoworkers at Fiat and Renault factories on strike for a number of days in May 2015 in Bursa, the centre of the Turkish car industry., tekhne

Among the many things behind the storm that staggered Turkey's ruling party in last week's elections, a disastrous foreign policy looms large. But a major factor behind the fall of the previously invincible Justice and Development Party (AKP) of President Recep Tayyip Erdogan was a grassroots revolt against rising poverty, growing inequality and the AKP's war on trade unions.

On the eve of the election, the government's Turkish Statistical Institute (TUIK) found that 22.4 percent of Turkish households fell below the official poverty line of $1,626 a month for a family of four. The country's largest trade union organization, TURK-IS, which uses a different formula for calculating poverty levels based on incomes below the minimum monthly wage-$118-argues that nearly 50 percent of the population is at, or near, the poverty line.

Figures show that while national income has, indeed, risen over the past decade, much of it has gone to the wealthy and well connected. When the AKP came to power in 2002, the top 1 percent accounted for 39 percent of the nation's wealth. Today that figure is 54 percent. In the meantime, credit card debt has increased 25 fold, from 222 million liras in 2002 to 5.8 billion liras today

In 2001, Turkey was in a serious economic crisis, with the unemployment rate at 10.8 percent. Today 11.3 percent are out of work, and that figure is much higher among young people and women. TUIK estimates that over 3 million Turks are jobless, but at least another 2.5 million have given up looking for jobs. The total size of the Turkish workforce is 28 million.

Women have been particularly hard hit. Over 227,000 women have been laid off this past year, a higher percentage than men. According to Aysen Candas of the Social Political Forum of Bogazici University, the "situation of women is just horrible."

While the average rate of employment for women in the 34 countries that make up the Organization of Economic Cooperation and Development is between 62 and 63 percent, in Turkey it is 25 percent. According to Candas, in access to jobs, political participation and economic power, Turkish women rank near the bottom of the 126 countries the Bogazici University study examined.

Turkish workers have seen their unions dismantled under the AKP government, and many have lost collective bargaining rights. According to the Ministry of Labor and Social Security, unionized workers have fallen from 57.5 percent of the workforce in 2003 to 9.68 percent today. And, of those unionized workers, only 4.5 percent have collective bargaining agreements. Add to this police repression, the widespread use of the subcontracting system, and a threshold of 3 percent to organize a new union, and there are few barriers to stop employers from squeezing their workforce.

In comparison, Sweden has a unionization rate of 67.7 percent, Finland 69 percent, Italy 35.6 percent and Greece 28.7 percent.

In the last election, the leftwing People's Democratic Party (HDP) and the social democratic People's Republican Party (CHP) pounded away at the AKP's record on poverty and union rights. "During its 12-year rule, the Justice and Development Party has curbed all labor rights though laws that are unlawful, siding with the capitalist class," CHP parliamentarian Suleyman Celebi told Al-Monitor. "It has besieged workers from all sides, from their right to strike and collective bargain, to their right of choosing their trade unions. The rights of tens of thousands of subcontracted workers have been flouted despite court rulings."

Erdogan has increasingly come under criticism for relying on force to deal with opponents, like the crushing of Istanbul's Gezi park demonstrations in 2013. And his drive to change the constitution from a parliamentary system to an American-style powerful executive apparently did not sit will with the majority of Turks.

The AKP's bread and butter has always been bread and butter: it handed out free coal, food, and financial aid to the poor, but as economic disparity grew and unemployment climbed, it was the Left that seized upon those themes, forcing Erdogan to defend spending $615 million plus for his lavish, 1,000-room presidential palace, and his $185 million presidential airplane.

With the economy in the doldrums, the AKP fell back on foreign policy and Islam.

"Islamization" has been a major AKP theme, but one that may have misfired in this election. A recent book by Turkish scholar Volkan Erit argues that Turkey is becoming less religious and more secular, particularly among the young. In any case, religion did not trump Turkey's growing international and regional isolation, Erdogan's fixation with the war in Syria, or his sudden reversal on making peace with the Kurds.

He refused to come to the aid of the besieged Syrian Kurds at Kobane last year, and his backpeddling on a peace agreement with Turkey's Kurds alienated even conservative Kurds, who abandoned the AKP and voted for the leftwing HDP.

A corruption scandal that implicated several of Erdogan's family members also hurt the AKP's image and caused some foreign investors to pull back, further damaging the economy.

And as far as the AKP's foreign policy goes, what was once a strength is now a liability.

In the past four years Turkey has gone from a regional peace maker-"zero problems with neighbors" was the slogan that wags have since changed to "zero neighbors without problems"-to odd man out, so isolated that it lost out to Venezuela in a bid for a UN Security Council seat.

It is not talking with Egypt, has an icy relationship with Iran, is alienated from Iraq, at war with Syria, and not on the best of terms with Russia and China. In fact its only real allies in the Middle East are the Gulf Monarchies, although in an indirect way it is teaming up with Israel to overthrow the Syrian regime of Bashar al-Assad.

The AKP has tried to make this isolation into a virtue-Erdogan's chief foreign policy advisor Ibnahim Kalin called it "precious loneliness"-but voters saw it less as a virtue than as alienation.

Its exports are down sharply because it has estranged its leading trade partners Iran and Iraq, and, by choosing the losing side in the Libyan civil war, it is out $28 billion in Libyan construction contracts. Its plans for expanding into sub-Saharan Africa are now on hold, and Libya owes Turkey $5 billion, money it is not likely to see in the near future.

The Syrian war is not popular with the average Turk and, with the influx of some two million refugees from that conflict, less so by the day. The Turkish Army opposes any involvement in Syria, because it sees nothing ahead but a quagmire that would ally Turkey with the al-Qaeda-linked Nusra Front.

In short, the AKP lost the election because almost 60 percent of the Turks opposed its domestic and foreign policies.

What happens now, however, is tricky, and not a little dangerous.

The AKP took a beating, dropping from 49.8 percent to 40.8 percent, and losing 53 seats in the parliament. Not only did the party not get their magic 330 seats that would allow Erdogan to change the constitution, at 258 seats the AKP needs a coalition partner to rule.

They are not likely to find one on the left.

The left-wing HDP-formerly largely a Kurdish-based party-shattered the 10 percent ceiling to serve in the Parliament, taking 13.1 percent of the vote and electing 79 representatives. The HDP's breakthrough came about because the Party allied itself with other left and progressive parties in 2012-much as Syriza did in Greece-and campaigned on an openly left program. 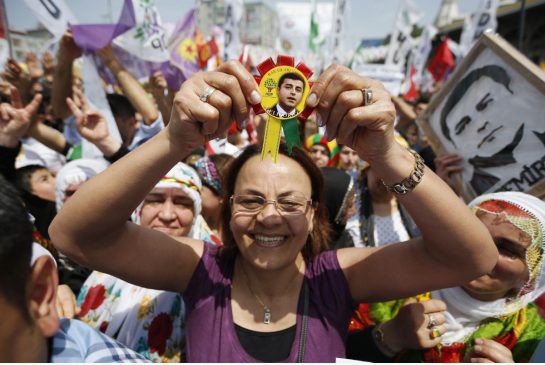 Led by the dynamic Selahattin Demirtas, its candidates included many women, as well as gays and lesbians. Some 40 percent of HDP's parliamentarians will be women and openly gay candidates will serve in the new Grand Assembly. "We, the oppressed people of Turkey who want justice, peace and freedom, have achieved a tremendous victory today," Demirtas said in the election's aftermath.

The AKP's traditional opponent, the social democratic CHP, came in at 25.9 percent, a slight improvement over 2014, and an increase of seven seats. The party now has 132 representatives in Parliament.

The danger comes from the performance of the right-wing National Action Party (MHP), which won 16.9 percent of the vote and picked up 28 seats. It now has the same number of seats as the HDP. The MHP is sometimes called "The Gray Wolves" after a neo-fascist hit squad that routinely assassinated left-wingers, academics and Kurds in the 1970s and '80s, and still has a shadowy presence in Turkey. The MHP claims it supports parliamentary rule, but the party's commitment to democracy is suspect.

At this point the MHP's leader Devlet Bahceli says he has no interest in a coalition with the AKP, but the authoritarian streak that runs through both parties might just bring them together. If they do unite, peace with the Kurds will vanish, and engaging in internal dissent will be an increasingly risky business.

But Turkey has tamed its formally coup-obsessed military, gone through several elections and, in spite of setbacks like Gezi Park, is a democratic country. It is also one that is in trouble at home and abroad, problems that the right is notoriously bad at solving, but for which the left has programmatic solutions.

It may be that the parties will deadlock, in which case new elections will have to held. In the meantime, the Turkish lira is at a record low, the stock market has tumbled 8 percent, and neither the economic crisis nor the foreign policy debacles are going away. Stay tuned, the future of a major player is in the balance.