Sanders has been a strong voice encouraging workers to build unions, opposing excessive corporate power and economic inequality; and for measures to curb climate change, notes the UE General Executive Board in a statement urging its members and locals to consider participating in his campaign. The statement also urged Sanders his to offers a stronger critique of US interventionist foreign policy. 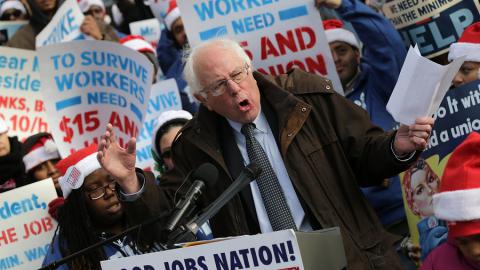 “America needs a political revolution.” Bernie Sanders will focus his campaign on the great challenges facing the country. Will he run as the "Tom Paine" Americans summon to help save their democracy?,

At its meeting May 28-29 in Pittsburgh, UE's General Executive Board adopted the following statement on the presidential campaign of Senator Bernie Sanders.

The UE General Executive Board welcomes the entrance of Senator Bernie Sanders of Vermont into the presidential race. Sanders, an independent who caucuses with the Democrats in the Senate, will compete in the Democratic primaries for the Democratic nomination. In his 35-year career in elected office, including 25 years in Congress, Bernie Sanders has been a strong friend and ally to UE members and to workers generally. He has urged workers to organize – as he did when workers at the U.S. Customs and Immigration Service (USCIS) in St. Albans organized UE Local 208 in 2008. When Vermont workers have organized, struck, or been engaged in other actions to defend their rights against employer greed or mismanagement, Sanders has spoken publicly in their behalf and assisted them in many other ways.

Recently the Vermont State AFL-CIO Labor Council urged the national AFL-CIO to support Sanders, calling him “the strongest candidate articulating our issues”. With the present stable of corporate-sponsored candidates in the presidential race we could not agree more.

Sanders has been a strong voice in American politics encouraging workers to build unions, against excessive corporate power and economic inequality; against the corrosive influence of big money in politics; for the environment and measures to curb climate change. He’s introduced legislation to not only protect Social Security but to increase the benefits, and supports a single-payer system of national health insurance, raising the minimum wage to $15, changing federal law to make it easier to organize, and has pledged to dismantle the Citizens United decision which enables corporations and wealthy donors to give unlimited dollars to political campaigns.

At his official campaign kickoff rally on May 25 in Burlington, VT, Sanders threw down the gauntlet to the corporate elite. “This campaign is going to send a message to the billionaire class. And that is: You can’t have it all. You can’t get huge tax breaks while children in this country go hungry. You can’t continue sending our jobs to China while millions are looking for work. You can’t hide your profits in the Cayman Islands and other tax havens, while there are massive unmet needs on every corner of this nation. Your greed has got to end. You cannot take advantage of all the benefits of America, if you refuse to accept your responsibilities.”

We are pleased with the way Senator Sanders frames these issues and the worker-based set of policies he is offering, in contrast to the pro-corporate policies of the other Democratic and Republican candidates. We encourage his campaign to offers a stronger critique of the interventionist foreign policy that is offered both by Hillary Clinton and the Republicans. We need our government to stop getting us into wars, stop trying to dominate and interfere in other countries’ affairs, and cut back the billions we spend on war and weapons and use those resources peacefully and productively to address our people’s needs at home.

We encourage UE members and locals to take a serious look at Bernie Sanders's campaign and to consider their active participation in it.