The University of Wisconsin at Madison was a hotbed of student radicalism in the 1960s. and left-wing activists there were among the first of their generation to organize around issues related to their own mis-treatment as workers. 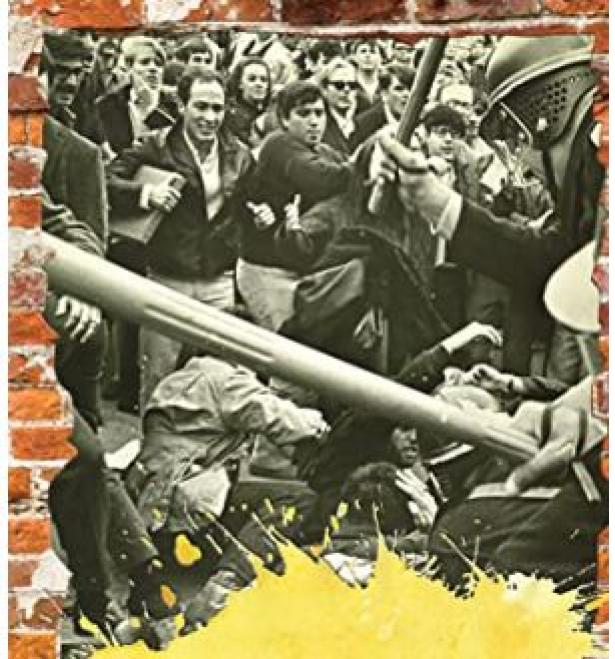 In 1963, undergraduates employed in campus jobs formed a Wisconsin Student Employees Union to force the administration to raise their wages to the federal minimum (a 50 cent per hour increase). Seven years later, the UW Teaching Assistants Association organized the first TA strike in U.S. history, a 24-day walk-out that won union recognition.

TROUBLEMAKER: Saying No to Power 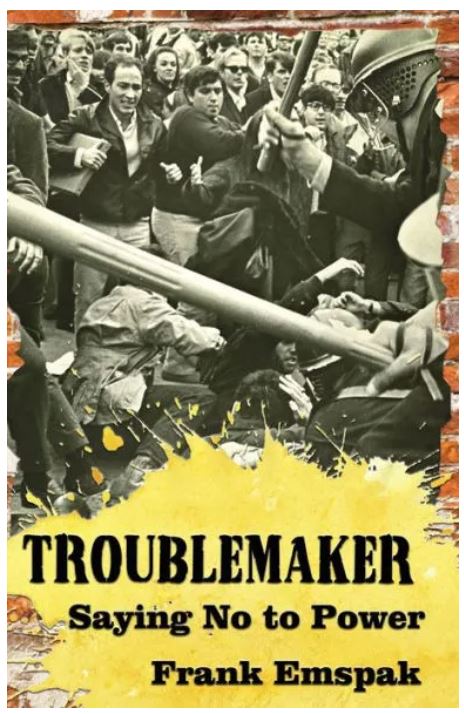 Wisconsin graduates like Frank Emspak, a co-founder of the Student Employees Union, went on to play key roles in the labor movement, locally, state-wide, and in others states. Emspak has just published a memoir, called Troublemaker: Saying No to Power (available on Amazon), about his own transition from being a campus agitator to a skilled blue-collar worker in unionized workplaces in the 1970s and 80s. His book contains much helpful advice for younger radicals seeking to revitalize organized labor fifty years later. It should be required reading by anyone trying to build a union reform caucus, which can actually oust old guard officials and replace them with rank-and-file militants more committed to membership mobilization and strike activity.

Today, that kind of internal struggle is more likely to occur in education, healthcare, or service sector labor organizations, rather than older industrial unions.  Socialists who become workplace organizers often choose companies—like Starbucks or Amazon--without established unions so they can play a catalytic role in new organizing or first contract struggles.  Yet, the United Auto Workers (UAW) is currently in the midst of a first-ever direct election of its top officers, which has created a new political opening for UAW dissidents, young and old. And, with a recent national leadership change for the better in the Teamsters, Teamsters for a Democratic Union (TDU)—formed 46 years ago with much socialist help--is now well positioned to shape contract campaigning in the nation’s largest private sector bargaining unit, which covers 230,000 workers at United Parcel Service.

In Troublemaker, Emspak describes shop floor organizing in an era when national bargaining on that scale was still the norm, rather than the exception, and unionized manufacturing had yet to be decimated by de-industrialization. Even when good-paying factory jobs were far more plentiful, however, management and its labor union partners had a shared interest in barring the door to former campus agitators like the author, who left UW with a PhD in labor history. Emspak also faced an additional challenge landing a job at General Electric in Lynn, Massachusetts, then the largest industrial complex in New England.

His father, Julius, had been a GE worker, along with five other members of two previous generations of his family. But, after going to college and graduate school. Julius Emspak became a key organizer and then longtime national officer of the United Electric Workers (UE). With help from Communist Party (CP) members or sympathizers, the UE emerged from the 1930s as one of the biggest and most effective industrial unions in the country. But the UE’s left-wing political orientation led to its purge from the Congress of Industrial Organizations (CIO) in 1949. During the 1950s, the union’s membership was decimated by CIO raids and decertification elections. These resulted in GE workers in Lynn and other locations becoming members of its more compliant replacement, the International Union of Electrical Workers (IUE), now part of the Communications Workers of America (CWA).

According to Emspak, even after the legal and political assault on the UE, GE still had to contend with “a large group of workers in Lynn who had a strong sense of what a real union could be” and welcomed the chance to unite with “a new generation of class- conscious troublemakers.” The author became one of them only due to the fortuitous intervention of two under-cover UE sympathizers. One helper was a foreman who hired Emspak without the knowledge of higher ups in the company. A second was a shop steward, who counseled him not to sign an IUE membership card, alerting the union hall of his hiring, until his probationary period was over and he could only be dismissed for just cause.

Once on the job, Emspak faced the challenge of making friends and fending off enemies, of whom he had many in management and the union officialdom. Along with other “colonizers” at GE from a variety of left-wing groups, he had to endure heavy red-baiting, often accompanied by physical threats. (On one occasion, Emspak was assaulted by hostile officials from other IUE locals when he attended a national union meeting and spoke out against GE proposals for a two-tier wage system,)  The author learned to become an effective workplace organizer by building personal relationships and joining social networks based on sharing meals on the job or gardening with co-workers on a company-provided plot at United Shoe Machine, a UE shop where Emspak worked before joining the IUE at GE.

In his memoir, Emspak also stresses the importance of publishing rank-and-file newsletters or revitalizing local union committees as a vehicle for addressing shop floor issues often ignored or downplayed by higher ranking union officials.  In IUE Local 201, the “left militant coalition” that Emspak helped to build was heavily represented “on the health and safety committee, the women’s committee and the new technology committee—groups that believed in and tried to implement membership-driven actions for health and safety and against sex bias and the challenges of new technology.”

At GE, the IUE contract included a rare open-ended grievance procedure. This made it possible for workers to strike, legally and during the life of the agreement, over unresolved grievances, if the action was approved by the Local 201executive board.  Troublemaker is filled with colorful and instructive accounts of direct action on the job, a tradition currently undergoing a revival in some non-union workplaces in the U.S.

Helping to lead shop-floor struggles made both authors viable candidates for local union leadership positions. Emspak was elected to the IUE’s national GE conference board and four times as a Local 201 executive board member, representing 1,000 workers at a satellite plant in a GE local with a total membership of 8,000. He also mounted a strong local-wide campaign for assistant business manager, losing by a mere 38 votes out of 4,834 cast. In a second bid for that leadership post, he and other militants were defeated after a plant-wide strike over accumulated grievances “lasted a month and achieved almost nothing.” By stonewalling the union and “making its progressive leadership look incompetent,” GE was able to install a “less confrontational group” at the 201 hall.

During his union career, Emspak found himself at odds, on several occasions, with his own outside political organization, the Communist Party (CP). In 1979, for example, he became part of a “worker-led campaign against a sub-standard national contract” with GE, organized in response to the “absence of leadership at the top of the union and no serious planning for a strike.”  As opposition grew among IUE Local 201 members, even the local’s business manager, a member of the national negotiating committee, urged rejection of the tentative agreement with the company. But, in the middle of this fight, the CP changed its position and supported the same GE settlement that its leadership had previously criticized. When Emspak continued to campaign for a “No” vote, this had the helpful effect of demonstrating that his “loyalty was to the membership and not the international union or the CP.”

Six years later, he reports, history repeated itself “when the Party endorsed union contracts with GE that Party members at GE had been leading the opposition against.” As Emspak recalls, “a top down decision was made, without input from many of us on the ground…At that point, there did not seem to be any benefit from being in the CP and most in the largest shop club in the industry simply left it.”

Emspak’s experience as a rank-and-file activist helped shape his later work as a labor educator and labor journalist. After he left GE and IUE Local 201 in 1987, he transitioned first to state and federal jobs as a valued advisor to unions on the impact of technological change in workplaces in the U.S. and Europe Then, he returned to his alma mater to teach shop stewards, local officers, and union staff members in labor education courses run by the University of Wisconsin School for Workers.

During Emspak’s career there, he founded Workers Independent News (WIN), which operated for sixteen years and, at its peak, produced pro-labor radio show content airing on 150 stations nation-wide, which reached hundreds of thousands of listeners. In this new arena, Emspak found himself walking a familiar tight-rope. During its existence, WIN raised several million dollars from twenty-two national unions, and additional donations from over one hundred local unions. But labor radio sponsors from the AFL-CIO and Change to Win affiliates were not always appreciative of “independent” reporting on their own strikes, contract campaigns, or internal politics.

As WIN’s founder reports, “we faced pressure to restrict our coverage to conform to the interests and opinions of union leadership…press freedom did not seem to be of particular concern.” The WIN experience leaves the question of how to finance independent labor journalism unanswered—but, in Emspak’s view, “points to developing a funding model that is widespread and not dependent on institutional union support.”

As a memoirist today, the author of Troublemaker has no WIN-driven need for self-censorship any longer. He has clearly been liberated to write a candid and illuminating account of his own past labor and political activism. The granular lessons that Emspak provides will be very useful to younger progressives who share his belief that only working class organizing can alter the balance of power between capital and labor, on the job and in the community.

[Steve Early has been active in the union movement since 1972, as an organizer and journalist. He is the author of five books about labor or politics, mostly recently Our Veterans: Winners, Losers, Friends and Enemies on the New Terrain of Veterans Affairs from Duke University Press. He can be reached at Lsupport@aol.com.]