Sanders, the Vermont senator seeking the Democratic nomination, is mixing it up with the media. In a frank give-and-take with reporters, he scolded the media for covering the election like a baseball game. Nobody cares about Gov. Bush's campaign manager, he said, while the GOP has gotten away with murder hiding their agenda. He also questioned how rival Hillary Clinton could fail to have an opinion on such a big issue as President Obama's proposed Pacific trade deal. 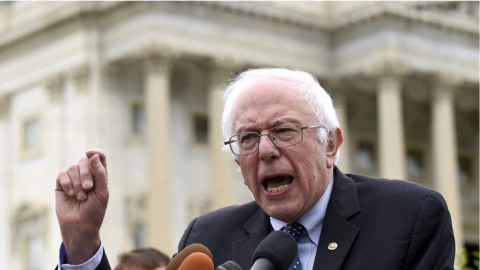 What does Bernie Sanders think of the media’s performance so far this campaign? Barely adequate. The huge speaking fees Bill and Hillary Clinton have accepted? Wrong question, he says; you should be asking why anyone pays them. How about primary debates? Sanders says the entire system should be redesigned to bring Republicans on stage with Democrats.

As Hillary Clinton stayed out of sight this week, fundraising and preparing what is sure to be a highly produced presidential campaign launch speech in New York on Saturday, Sanders, the senator from Vermont who also is seeking the Democratic nomination, was mixing it up with the media.

The contrast was notable. Clinton has yet to put herself in the situation that Sanders eagerly embraced Thursday morning, as he engaged in a frank give-and-take with reporters over breakfast. He delivered some lines it would be hard to imagine Clinton ever uttering — not because they reflected his socialist outlook, but because they were so blunt.

“Campaigns are not baseball games,” Sanders scolded. “What did I read in the paper today? Gov. Bush is getting a new campaign manager. You know who cares about that? About eight people in the world. Nobody cares about that.”

Sanders went on to express irritation with the way journalists slap the "socialist" label on him, as if his embrace of policies common in the democracies of western Europe makes him a radical outlier.

“It is not a radical agenda,” he said. “In virtually every instance, what I am saying is supported by a significant majority of the American people. Yes, it is not supported by the Business Roundtable or the Chamber of Commerce or Wall Street. I maybe old-fashioned enough to believe that Congress might want to be representing a vast majority of our people … and not just the Koch brothers and other campaign contributors.”

He suggested that if the media are going to refer to him as a socialist, journalists also should affix the label of “capitalist” with every mention of his rivals.

Sanders expressed his disgust with all the money in politics, vowing to nominate justices to the Supreme Court who would overturn the rulings that have diminished campaign finance laws, but he also joked that taking such a hard line is hardly a strategic risk for him.

“I don’t want the money of billionaire class, which is very easy for me to say because I would not get their money even if I wanted it,” he said.

Still, he expressed confidence that he can mobilize enough small donors to be competitive in Iowa and New Hampshire, saying the $40 million to $50 million it would take is within reach. Some 200,000 people have made small contributions to his campaign, the underdog said.

As for being down 50 points in the polls, Sanders attributed Clinton's lead not to a fondness among the electorate for her and what she stands for, but because most Americans have not yet heard of him or been exposed to his ideas. That, he vowed, will change.

Sanders avoided much of the bait reporters threw his way Thursday morning. He did not attack Clinton’s character or her finances. Asked about the huge speaking fees she and her husband accepted over the past year and a half, Sanders said he was more troubled that any organizations were paying those kinds of fees. He then pivoted to a polemic on the billionaire Koch brothers, who back conservative causes.

When it came to Clinton’s policy positions, though, he could be merciless. He suggested that her refusal to take a position on the controversial Pacific trade agreement being deliberated in Congress is bewildering. Most progressives are imploring Congress to block the deal the Obama administration is negotiating.

“I don’t understand how on an issue of such huge consequence you don’t have an opinion,” Sanders said.

The Vermonter said he would like to see more than the planned six Democratic primary debates — but he said they shouldn’t just be debates of Democrats. Get Republican contenders on the same stage too, he suggested.

“It’s a good idea to have a group of Democrats and a group of Republicans,” he said. “I think the Republicans, frankly, have gotten away with murder. I think people really do not know what their agenda is.”

Evan Halper writes about a broad range of policy issues out of Washington D.C., with particular emphasis on how Washington regulates, agitates and very often miscalculates in its dealings with California. Before heading east, he was the Los Angeles Times bureau chief in Sacramento, where he spent a decade untangling California’s epic budget mess and political dysfunction. @evanhalper