In U.S., Confidence in Police Lowest in 22 Years

Americans' confidence in the police is down to 52%, an all time low since 1993 in the wake of the the Rodney King police beating. Although this Gallup report concludes that the 52% figure means that the "majority of American remain confident in this institution and have more faith in it than in most other institutions," put another way, nearly half of all Americans do not have faith in most institutions including the police. The figures are nevertheless noteworthy. 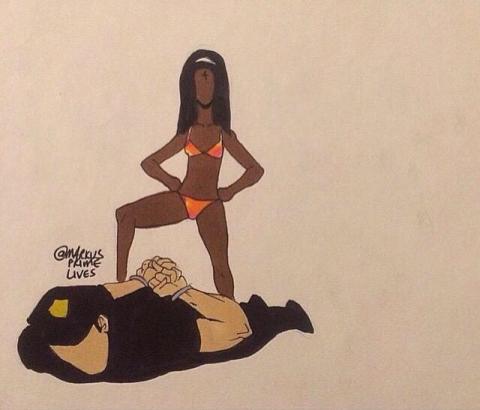 PRINCETON, N.J. -- While a majority of Americans remain confident in the police, 52% currently express "a great deal" or "quite a lot" of confidence in that institution, tying the low in Gallup's 22-year trend. Confidence has ranged fairly narrowly between 52% and 64% since 1993. Gallup updated its annual confidence in U.S. institutions question in a June 2-7 Gallup poll. Even at its currently reduced confidence level, the police are still among the highest-ranking institutions, trailing only the military and small business among the 15 institutions tested in the poll.

Overall, 25% of Americans say they have a great deal of confidence in the police, 27% quite a lot, 30% "some," 16% "very little" and 2% "none." The combined 18% who have very little or no confidence in police is the highest Gallup has measured to date. The full results for the trend are shown at the end of this article.

The actions of police in certain U.S. cities -- including Ferguson, Missouri; Staten Island, New York; and North Charleston, South Carolina -- have recently come under scrutiny after black men were killed while being apprehended by white police officers. These events likely contributed to the decline in confidence in police, although it is important to note that Americans' trust in police has not been fundamentally shaken -- it remains high in an absolute sense, despite being at a historical low.

Americans' confidence in the police was last at 52% in 1993, the first time Gallup included police in the list of institutions. That poll was conducted as four white Los Angeles police officers were being tried in federal court for violating Rodney King's civil rights in the 1991 beating of King. The four had earlier been acquitted of criminal charges in state court, which provoked riots in 1992. Two of the four officers were later found guilty of violating King's civil rights.

The analysis of a combination of two years' data is necessary to get more stable estimates on smaller subgroups, particularly blacks. Over the last two years, blacks' confidence in police has averaged 30%, well below the national average of 53% and much lower than for any other subgroup. Blacks' confidence is down six points from 2012-2013, similar to the four-point drop among all Americans. One reason blacks' confidence has not changed disproportionately over the last two years is that their confidence in the police was already low, and the recent events appear not to have fundamentally changed their already negative views of the police.

Blacks are disproportionately likely to identify as Democrats rather than Republicans or independents, but the data suggest the decline in confidence in police among Democrats has as much to do with politics as race. White Democrats' confidence declined 11 points over the last two years, similar to the 14-point decline among nonwhite Democrats.

The sample sizes are not large enough to break out black Democrats separately, but the limited data suggest their confidence declined no more than that of white Democrats.

The Democratic Party has typically received much higher support from racial and ethnic minorities than the Republican Party, and that is reflected in the greater concern rank-and-file Democrats typically express about matters of race and the greater importance they assign them as a voting issue. As a result, Democrats of all races may be especially concerned about alleged mistreatment of black suspects by white police officers.

Although confidence in police is at its low point, the majority of Americans remain confident in this institution and have more faith in it than in most other institutions.

The recent incidents in which black men were killed at the hands of white police officers trying to apprehend them have attracted a lot of media attention, but on a partisan basis they seem to have affected only the way Democrats view the police. The news has had less effect on how blacks specifically view the police, but that is most likely because blacks had far less confidence in the police long before these events happened.

In the future, actions on the part of city governments and police departments to enhance relations with blacks in their communities, along with changes in policing techniques, could result in fewer racially charged incidents with police. That in turn could help restore some of the public's confidence in the police. However, it will likely take much more than that for the police to gain blacks' trust, given the long history of tension between blacks and police.

Results for this Gallup poll are based on telephone interviews conducted June 2-7, 2015, with a random sample of 1,527 adults, aged 18 and older, living in all 50 U.S. states and the District of Columbia. For results based on the total sample of national adults, the margin of sampling error is ±3 percentage points at the 95% confidence level. All reported margins of sampling error include computed design effects for weighting.

Results for blacks' confidence from the 2012-2013 polls are based on interviews with 219 non-Hispanic blacks and have a margin of error of ±8 percentage points at the 95% confidence level.

Results for blacks' confidence from the 2014-2015 polls are based on interviews with 249 non-Hispanic blacks and have a margin of error of ±8 percentage points at the 95% confidence level.