This review of Alan Leinovitz's, The Gluten Lie, discusses how the author sees parallels between religious stories, fairy tales and nutrition myths. 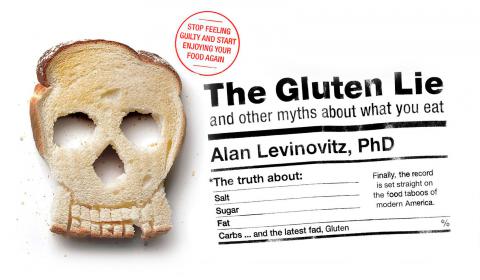 The Gluten Lie and Other Myths About What You Eat, http://www.skeptic.com/eskeptic/15-05-20/

The parade of diet fads is unending; they will continue to proliferate as long as humans have to eat. They have created a hellish world in which every food component is a potential demon: fat, gluten, carbs, sugar, wheat, salt, etc. Diet gurus, both professional and amateur, are always ready to tell us what to eat or not to eat. Their advice is supported by great enthusiasm and plentiful testimonials but little scientific evidence.

In his new book The Gluten Lie: and other myths about what you eat Alan Levinovitz examines the diet myth phenomenon from a refreshingly different viewpoint. He might seem like a strange candidate to author a book on diet. He’s not a nutrition expert, a doctor, or even a scientist; he is a scholar of religion. But that gives him a unique perspective. His expertise is in studying religious stories that function as metaphors. He says the key to understanding fad diets is not science, but history. “Once you see enough of the same archetypal myths and the same superstitions, new dietary claims start to look a lot like flood myths.”

They do indeed. The same memes keep repeating. Good vs. evil. Natural vs. manmade. Magical thinking: you are what you eat. The scary technology of the modern world vs. the idealistic Eden our ancestors supposedly enjoyed (they didn’t!). Evolutionary “Just So Stories” that convert what we think our ancestors ate into what we should eat or argue that since evolution didn’t equip us with sharp fangs, we shouldn’t eat meat. People presume to know Nature’s intentions. Clean, pure, virtuous foods vs. “unclean” forbidden foods, toxins, and sinful indulgence. We are being manipulated for profit by evil big corporations to the detriment of our health. Subconscious Puritan values kick in: if it’s pleasurable, it must be bad. Religious-like mantras divide the world into simplistic binary categories. Following the strict guidelines of the in-group proves you are a good person. Moral and religious vocabulary is inappropriately applied to scientific questions.

Levinovitz suggests that it would be helpful for scholars of folk and fairy tales to examine nutrition myths. Folklore studies would be able to classify diet stories into repeated story types like “miracle food from Tibet,” “dietary cures for chronic disease,” and “everyday food is poisonous.”

To many people science is suspect because of the steady stream of scientific reversals on butter, wine, or whatever food appears in the headlines. But he points out that these are not reversals at all, because nothing was ever established in the first place. The headlines report single preliminary studies that are questionable, not scientific consensus based on an accumulated body of reliable data. True science is humble, cautious, and embraces complexity and uncertainty.

“The unpleasant reality is that we don’t know what constitutes an ‘ideal’ diet, and there may be no such thing.” Eating in moderation has always been the common sense mainstay of diet advice, and science has added nothing that stands up to rigorous scrutiny. Levinovitz advocates removing the fear and restoring the pleasure in eating. “Fiction, not food, is the real demon.” With healthy helpings of history and skepticism, we can learn to laugh at fads and eat our dinner in peace.

As Levinovitz relates the history of MSG, gluten, fat, sugar, and salt, the repeated memes produce a strong sensation of déjà vu: someone makes a chance observation, gets an Idea that might explain the observation, extrapolates to apply the Idea to everyone, does a poor-quality uncontrolled study that seems to support the Idea, and persuades people to try his diet. They respond because the Idea strikes a chord, fits in with their worldview, is emotionally satisfying, and seems scientifically plausible. When they change their diet, they tend to eat healthier because they cook at home and eat less junk food. They feel better for psychological reasons and placebo effects, confirmation bias kicks in, and they spread the word with testimonials. Eventually more rigorous scientific studies debunk the Idea, but it is too late. MSG is exonerated, but people continue to believe MSG is the reason for their symptoms. Emerging evidence suggests that non-celiac gluten sensitivity may not be sensitivity to gluten but to FODMAPS (Fermentable Oligo-, Di-, Mono-saccharides And Polyols); if that is confirmed, we can predict that people will continue to believe gluten is the culprit. Once people’s minds are made up, they resist new evidence. Anecdotes and big Ideas reinforce powerful myths and promise simple solutions to a variety of health problems. Asking someone to question their food beliefs is tantamount to asking them to change their religion.

Levinovitz has done his research, and he understands science better than many scientists. He says,

If we are serious about the quest for good health, physical and mental, we cannot be slaves to fear and to our desire for easy answers. We must honestly admit our ignorance. We must recognize our capacity for self-deception. And when others—including medical and scientific professionals—refuse to do the same, we must learn to recognize their lies.

Most fad diets have been definitively debunked by scientific evidence. He doesn’t mince words: he says Grain Brain is a lie. Unfortunately, professional organizations don’t always follow the evidence. They promote their own lies, recommending low salt and low fat diets long after they should have been discarded for lack of evidence. They see themselves as experts and saviors and their egos won’t let them admit they have been giving their patients bad advice and making false dogmatic pronouncements about things that are far from settled. There is no good evidence that low fat diets are healthier. The low salt recommendations are practically impossible to follow; they may be advisable for a small sub-section of the population that is salt-sensitive, but for the rest of us, low salt diets are unnecessary and may create problems like potassium deficiency.

The book ends with two appendixes: (1) The Unpacked Diet and (2) UNPACKED: The Unpacked Diet. The first is a persuasive argument that the problem is not what you eat but what it is packaged in. It cites numerous scientific studies showing that plastics (like BPA), Styrofoam, and even aluminum have deadly health effects. By switching to Unpacked-approved packaging materials, you will experience health benefits: weight loss, sound sleep, lower blood pressure, no risk of cancer or Alzheimer’s, no more acne, dry skin or brain fog. It recommends a 9-day “detox” trial to see for yourself how much better you will feel when you avoid those toxic packaging materials.

The second appendix is an annotated version of the first revealing that it is a satire and showing how it copies the methods of diet faddists, reproduces their testimonials word for word, cherry-picks scientific studies that appear to support the thesis, uses faulty logic, plays on emotions, and is designed to thoroughly mislead readers. I would encourage you to read the first version and try critiquing it yourself before you read the second. It’s a good exercise to see how much you have learned from the book.