This documentary lets nobody off the hook. Discomfort is crucial to the film's complexity and is why it works as somewhat of an ethical and intellectual provocation. Mr. Kapadia isn’t simply revisiting Ms. Winehouse’s life and death, but also — by pulling you in close to her, first pleasantly and then unpleasantly — telling the story of contemporary celebrity and, crucially, fandom’s cost. 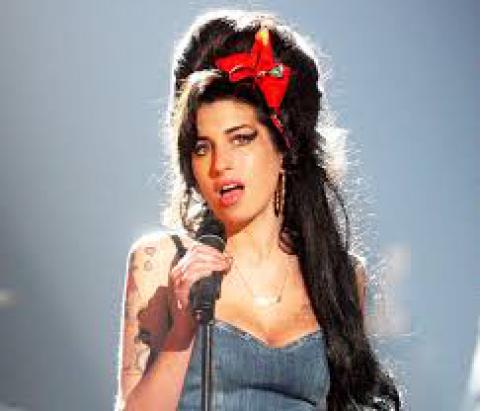 In “The Dogs Are Eating Your Mother,” a poem that Ted Hughes addressed to his children and, by extension, critics and fans, he writes of “a kind of hyena” tearing at the body of his dead wife, Sylvia Plath. “They dug her out. Now they batten/On the cornucopia/Of her body.” In “Amy,” a shattering biographical portrait of the British singer and songwriter Amy Winehouse, you catch sight of some other hyenas every time the paparazzi go in for the kill. The photographers shove their cameras toward her haunted face and ravaged body, ripping at her with each new shot.

Some of those images show up in “Amy,” which traces the arc of her short, messy life from smoky-voiced jazz singer to global pop sensation to her death in 2011, at 27, from alcohol poisoning. This material makes for uneasy viewing, as do some of her agonizing self-portraits. The director, Asif Kapadia, doesn’t directly answer whether the public wanted to see Ms. Winehouse hit bottom or were instead force-fed her downfall, though this question haunts the movie. Because whatever the case, it became difficult to avoid the steady feed of her later-life degradation, photo by photo, joke by joke. What’s startling now is to realize that we were all watching her die.

We still are, though there’s a great deal more to this documentary than sad spectacle. The larger outline of Ms. Winehouse’s story is more or less well known, having been previously packaged and sold through public relations and the entertainment media, those mutually dependent engines of contemporary celebrity culture. Mr. Kapadia opens that story when Ms. Winehouse is around 14 and goofing around on video in a house with some pals, including her lifelong friends, Juliette Ashby and Lauren Gilbert. They were girls from suburban northwest London, and come across as ordinary teenagers until Amy opens the throttle on “Happy Birthday,” the words pouring out in a low, rich quaver. The voice is already there.

By 16, Ms. Winehouse had a manager, Nick Shymansky, who was 19 when they joined forces. Their professional relationship turned into a deep, enduring friendship, a bond that benefits this movie enormously. Ms. Winehouse’s label, Universal Music UK, commissioned the movie and gave Mr. Kapadia full creative control, one reason that it’s spikier, tougher and more interesting than the usual official biographies-hagiographies. Universal also provided Mr. Kapadia complete access to her musical catalog, which allows you to track her through her music and not only through the testimonials of her family, friends and colleagues. Equally important, Mr. Shymansky, Ms. Ashby and Ms. Gilbert all cooperated with Mr. Kapadia, sharing their Amy through their archives as well as joyous and chokingly emotional remembrances.

Mr. Kapadia keeps his eyes — and yours — on Ms. Winehouse throughout. Shrewdly, he has pieced together the visuals exclusively from archival images, tapping into a trove of home videos, concert material, publicity interviews and recording sessions. (Among the highlights is a piercingly moving session with a gentle, supportive Tony Bennett.) Like many who have come of age in the digital era, Ms. Winehouse and her friends seemed to have kept a running record of their lives, cataloging their waking and sleeping hours, their back-seat and backstage lulls; Mr. Shymansky alone gave Mr. Kapadia 12 hours of video. All this personal documentation, as well as Mr. Kapadia’s decision not to incorporate any new on-camera interviews, sometimes gives the movie the feel of a diary.

This makes “Amy” an intensely intimate experience, which is delightful as you’re getting to know her early on, when she’s all shy, charming smiles and having her first successes. In its rise-and-fall arc, her star-is-born/star-is-dead story is painfully familiar; she is, bluntly, just one more name now etched on our pop-cultural mausoleum. Yet, as this movie reminds you again and again, the commercial entity known as Amy Winehouse was also a human being, and it’s this person, this Amy, whom you get to know through all the lovely little details, knowing winks, funny asides and barbed observations that help make the movie memorable. Ms. Winehouse was surprisingly funny, down home, sharp and seemingly self-knowing, as suggested by her voiced fears about becoming famous.

Fame hit her fast, hard and mercilessly. Mr. Kapadia shows the expected good highs, including relationships with other musicians, like Yasiin Bey when he was known as Mos Def. There are the inevitable bad highs, too, including those that helped destroy her health and transform her into tabloid fodder. It’s awful to see, and at times infuriating, as when Jay Leno, who had welcomed her onto “The Tonight Show,” makes jokes about her drug use with repulsive callousness. And while she sometimes tried to dodge the public, she seemed incapable of escaping it — us — whether by choice or not. The documentary becomes progressively more difficult to watch as Ms. Winehouse falls apart and as its intimacy, which earlier felt nice and cozily warm, starts to feel uncomfortably intrusive.

This discomfort is crucial to the movie’s complexity and is why it works as somewhat of an ethical and intellectual provocation. With “Amy,” Mr. Kapadia isn’t simply revisiting Ms. Winehouse’s life and death, but also — by pulling you in close to her, first pleasantly and then unpleasantly — telling the story of contemporary celebrity and, crucially, fandom’s cost. She obviously enjoyed some of what fame gave her, but it also delivered swarms of paparazzi and made for a few unhealthy relationships. Ms. Winehouse’s family has complained that the movie is “misleading and contains some basic untruths.” Mr. Kapadia, however, doesn’t seem to have needed to work hard to make some members of Ms. Winehouse’s circle look bad; they do a fine job of that themselves.

The rest of us don’t come out looking terribly good, either. Did you laugh, as I did, when you first heard Ms. Winehouse singing “Rehab,” which opens with the lyric “They tried to make me go to rehab but I said, ‘No, no, no’ ”? It’s a catchy song and made her a mint, but I’ll never hear it the same way again after seeing this documentary, mostly because, scene by scene, Mr. Kapadia makes a case for just how desperately unfunny it always was. At times in “Amy,” it seems as if Ms. Winehouse, by living and crashing so publicly, was intent on making the whole world her enabler, even if it’s clear she wasn’t the only addict here. Somebody, after all, buys those tabloids.