Even though AFT's press release explained the process of how members were polled, including several town hall meetings, multiple surveys and a "you decide" website, the announcement of the endorsement erupted a firestorm of outrage from AFT teacher members nationwide on twitter. 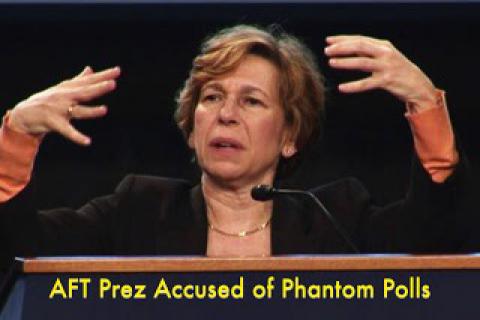 On Saturday, July 11th - the American Federation of Teachers (AFT) President, Randi Weingarten came under fire after her executive council voted overwhelmingly to endorse Hillary Clinton for the democratic primary for President of the United States. AFT is the parent organization of Washington Teachers' Union, Local 6 and has 1.5 million members.

In an AFT press release, President Weingarten said "Hillary Clinton is a tested leader who shares our values, is supported by our members and is prepared for a tough fight on behalf of students, families and communities. That fight defines her career."
Weingarten added that Clinton is a "product of public schools and believes in the promise of public education.... Hillary understands that policymakers need to work with teachers and their unions. She's ready to work with us to confront the issues of children and their families today, including poverty, wage stagnation, income equality and the lack of opportunity."
Even though AFT's press release explained the process of how members were polled, including several town hall meetings, multiple surveys and a "you decide" website, the announcement of the endorsement erupted a firestorm of outrage from AFT teacher members nationwide on twitter.
In the course of hours, many teachers hurled questions at @Rweingarten and @AFTunion twitter accounts asking, when was there was a poll of the membership and requesting links to all of the polls.
Renowned NY Teacher *blogger, Arthur Goldstein  (known as NYC Educator) said "...AFT Link says they used telephone town halls and a web-based survey, I didn't even know existed."
Katie Osgood, a special education teacher from Chicago said "I know many AFT members too and have not heard one person polled either." Mary Ahern called it "B.S. and queried how many of the over 1 million members responded?”
Activist teacher members and others lamented that the AFT endorsement of Clinton was a clear reminder of President Randi Weingarten's autocratic leadership style that treats teachers like passive herd-driven professionals rather than independent thinkers with a voice.
Phil Soreneson tweeted to President Weingarten, “glad I’m NEA, u don’t speak for me, u just made teachers’ look politically inept. Thanks for nothing.”
Naturewoman tweeted to AFT, "guessing you did not poll your members! No to Clinton who promotes Teach for America and charters!" Mr. Stevens echoed "Clinton endorsement is a joke & local union voices are being silenced to retain AFT union funding."
Minnsanity added, "AFT tried to shove NCLB, common core, PARCC and now Hillary on us - we ain't buying." Barmak Nassirian ‏summed it up best in his tweet, "sad day when political expediency trumps legitimate representation of members' real priorities."
Within hours teachers demanded fellow members to contact AFT and demand they rescind the Hillary Clinton endorsement. Teachers began adding their comments to Diane Ravitch’s education blog where she posted AFT’s press release on the Clinton for President endorsement. So far 147 comments have been posted, to date.
Given no one could locate AFT’s poll of members', the Badass Teachers Association  (BAT) took matters into their own hands by conducting a poll on Face Book. So far   1240 teachers endorsed Bernie Sanders and only 84 endorsed Clinton. One teacher said "Weingarten has this thing about giving false information via polls... It's scary."
Some of our AFT members  are taking matters into their own hands and have created a petition to demand AFT rescind their Hillary for US president endorsement. Click on  LINK  for the petition. So far 1,109 had signed on.
I too was up in the wee hours of the morning watching all of this unfold. Right here in DC, as an active member of WTU local 6 and elected General Vice President- I wondered how I had never been polled or invited to participate in AFT’s web based town hall or knew of members who had?
I concur with Aixa Rodriguez’s tweet, “it is 2:23 am and I am so mad at  AFT’s  ‪#prematureendorsement I cannot sleep. And so I tweet. And all my friends are up too….”
Don’t get this twisted, in the words of Lace to the top, “The story isn't ‪Randi Weingarten and AFT’'s endorsement of ‪Hillary Clinton. The story is all the amazing teachers saying no freaking way!!!!”