For years I’ve battled a driving anxiety. I want to get over it, but the mysterious death of Sandra Bland after a routine traffic stop in Texas reminds me that in black women’s lives, safety is an illusion.

July 22, 2015 Danielle C. Belton The Root
Printer friendly
The Death of Sandra Bland and My Fear of Driving While Black Published July 22, 2015 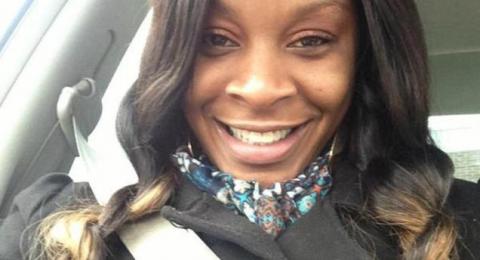 For most of my adult life I’ve struggled with anxiety—whether mild or serious—and it’s done everything from make me cancel events to lose my train of thought midsentence. It’s caused me to hide in my house for days on end, and about six years ago it came for my ability to drive anywhere without having panic attacks.

The fear is rooted in one singular thought: I’m not safe.

I tell myself that I am paranoid. That I am overthinking things. That in human history, I couldn’t be living in a safer place and time. And yet I live in a time when Sandra Bland could drive to Prairie View A&M in Texas to start a new job, get pulled over for a routine traffic stop, have that escalate into an officer’s claim of assault, and a few days later be dead of “self-inflicted asphyxiation” in a jail cell.

She was from Naperville, Ill. I used to go to school in Illinois, and my father graduated from Prairie View. I was there in my youth. I also once drove to Texas early in my career to take a job at a newspaper in Midland. Then, before the fear, I expertly drove the wide expanse of Texas highways and through the small, one-light towns and speed traps. My mother rode shotgun and pestered me about going the speed limit and using my turn signals.

“What for?” I thought as I tore down another highway that seemed to go on forever, highways that Texas is full of. I was trying to get where I was going.

“But you don’t want to arrive dead,” my mother would fret.

She was worried about a traffic accident. Maybe she should have been worried about a police officer stopping me for speeding? But that couldn’t, or wouldn’t, happen to me.

But that’s not even how your own brain works. That’s not how anyone’s works. One person’s polite refusal is another’s “insubordination.” Curse words erupt under duress without consciousness. We’re all one bad police officer from getting tossed to the ground. But you tell yourself, “I’m in control. I choose my fate.”

But then Renisha McBride comes to mind, and her car accident and going to a house near Detroit for help, only to be shot and murdered. Rekia Boyd, who was shot and killed by an off-duty officer in Chicago who allegedly thought he saw a man with a gun and opened fire. I try to tell myself, “Well, I’ve given up driving; I only go out when I have to. That should keep me safe.” But I have an anxiety disorder. I have a mental illness for which I’m in treatment. What if it ever got really bad? What if I needed help?

And that makes me think of Tanisha Anderson, killed in Cleveland while having a “mental-health episode” by police. She was 37. I’m the same age. I was diagnosed with bipolar disorder in 2006. Was I one really bad day from her fate? It happened to Shereese Francis in New York City in 2012 when she stopped taking her medication for schizophrenia and her family called the police to help get her into a hospital. She also ended up dead.

Better not go out if the anxiety is really bad, but also, better not call the police if I get that sick. “I’ll somehow drive myself to the doctor,” I tell myself. But then, I’m

A friend asked how bad my fear of driving was, and I joked that I had no desire to white-knuckle it to get from point A to point B. I could get over the fear, as I’d done in the past, by simply forcing myself to drive, confronting my terror, but it might take several harrowing days of driving every day to overcome my anxieties and to enjoy driving again. I could take a week or longer to not be plagued by my fears. To not have heart-thundering panic attacks. To not start crying the minute I had to pull onto the interstate.

I want to get over my fear. Want. Desire. Would like to. But will I, when Sandra Bland and so many other black women are the victims of violence at the hands of either civilians or the police? Have my irrational fears found a small shred of rationality in this madness? I tell myself that I will be safe. That statistically it is more likely than not that nothing will happen to me.

But didn’t Bland tell herself she was safe? Didn’t McBride? Didn’t so many others?

We need to believe that we are safe—otherwise we stop functioning—and my inability to drive was proof that part of me had stopped functioning long ago. I want to get my power back. But how do you overcome a delusion that’s actually not so delusional?

To feel safe, I need to believe a lie.