The Rapid Success of Fight for $15: 'This Is a Trend That Cannot Be Stopped'

When fast-food workers started protesting just two years ago for a $15 minimum wage, they were mocked. This week, they secured their biggest victory yet. 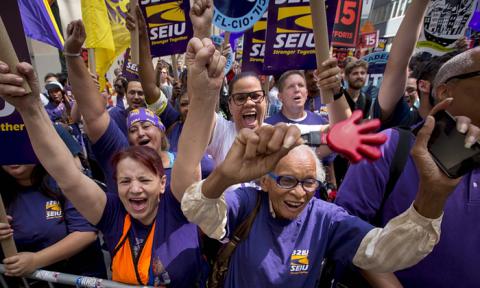 People celebrate the passage of the minimum wage for fast-food workers by the New York State Fast Food Wage Board during a rally on Wednesday, Brendan Mcdermid/Reuters

When 200 New York restaurant workers walked out in the nation’s first-ever fast-food strike in late 2012, they were widely mocked for demanding minimum pay of $15 an hour, with some critics saying their demand was absurdly out of reach, akin to visiting Mars.

But this week a New York state panel appointed by Governor Andrew Cuomo recommended establishing a $15 minimum wage for the state’s 180,000 fast-food workers. It was a landmark win for an unorthodox movement – the Fight for 15 – that is just two and a half years old.

“It’s huge,” said Kendall Fells, the Fight for 15’s chief organizer. “It’s hard to believe, going back to that first one-day strike, with people saying, ‘They’re crazy. This is stupid.’ And now you have Governor Cuomo stepping up to help raise wages for 180,000, people.”

Fells said the movement was intent on charging ahead and would continue to press McDonald’s, and other fast-food companies to adopt a $15 minimum, which suddenly appears more realistic now that a New York state board has recommended $15, to be phased in over three years in New York City and six years in the rest of the state. Moreover, it might grow harder for McDonald’s to resist such demands if New York’s move – which awaits formal approval by the state labor commissioner – demonstrates that fast-food restaurants can survive and perhaps even thrive paying more than twice the federal minimum wage of $7.25 an hour.

Fells said the movement would press more cities and states to embrace $15. He noted that Tacoma, Washington, was considering $15 after Seattle, San Francisco and Los Angeles voted to adopt a $15 minimum, phased in over several years. The movement is urging the Massachusetts legislature to enact a $15 minimum for big-box and fast-food chains.

“This is a trend that cannot be stopped,” said Gary Chaison, a usually subdued professor of industrial relations at Clark University in Worcester, Massachusetts. “I think within five or 10 years almost every state in the country – maybe not Mississippi or Alabama – will have a $15 minimum wage.”

“This is an idea whose time has come – that in the United States you should not work and be poor at the same time,” Chaison continued. “If you can get this on the west coast and in New York, you’ll see efforts to push it in the middle of the country – in places like Chicago and Atlanta. I don’t think the Republicans will be able to stop it. This is a tidal wave.”

The Fight for 15 has mushroomed from a modest, one-day walkout by 200 workers in one city to one of the largest US labor protests in decades, with tens of thousands of fast-food workers and their supporters protesting in 200 cities last April, in the movement’s ninth one-day strike.

The New York move was one of several Fight for 15 victories this week. The Los Angeles County board of supervisors voted to approve a $15 minimum wage, phased in by 2020, while the University of California system adopted $15 base pay for its workers and those of outside contractors. City officials in Washington DC ruled on Wednesday that a proposal for a $15 minimum wage was an appropriate subject for a citywide ballot initiative. The DC Working Families Organization is seeking to collect 24,000 signatures to have a $15 minimum placed on the ballot next year.

“The energy around the campaign is incredibly high,” said Delvone Michael, the group’s director. “DC is one of the most expensive cities in the country, and income inequality is outlandish in DC. We want to do something to help people struggling to support their families.”

Championing the Fight for 15, Senator Bernie Sanders of Vermont, who is seeking the Democratic presidential nomination, introduced a bill to raise the federal minimum wage to $15 by 2020. His bill stands little chance because Republicans control Congress. Former Maryland governor Martin O’Malley, a Democratic candidate, also backs a $15 federal minimum, and their support is intensifying pressure on Hillary Clinton, the Democratic frontrunner, to endorse $15.

Clinton has stopped short of that, but said this month: “I support the local efforts that are going on that are making it possible for people working in certain localities to actually earn $15.”

The Republican presidential candidates generally oppose raising the federal minimum wage, with some suggesting that there should be no legislated minimum wage.

In numerous cities, there are campaigns to raise the minimum to somewhat less than $15. Liberal and labor groups are pushing the St Louis city council to adopt a phased-in $13 minimum, as Kansas City has done. The Republican-controlled Missouri legislature passed a “pre-emption” bill to bar local communities from enacting higher minimums, but Governor Jay Nixon, vetoed the legislation.

In Alabama, progressive groups are pressing the Birmingham city council to enact a $10.10 minimum wage. In adopting a $9 minimum wage last December, Louisville became one of the first cities in the south to adopt a minimum above the federal $7.25 an hour. Business groups have sued to block Louisville’s move, saying the state, not the city, has the authority to take such actions.

The New York State Restaurant Association criticized the wage board’s call for $15. The association accused Cuomo of “stacking the board” with pro-labor people and said the board adopted “an extremist policy that will force business owners in this low-profit-margin industry to cut hours, lay off employees and use technology to help offset skyrocketing labor costs”.

Tsedeye Gebreselassie, a senior staff attorney at the National Employment Law Project, an advocacy group for low-wage workers, predicted that New York’s move would help workers outside fast food. She said: “There will be pressure on other low-wage sectors to raise pay because they will be competing to attract workers with the fast-food industry, which will be paying a lot more.”

Fells said the Fight for 15– which is also pushing to raise wages for childcare workers, and home-care workers - might ask Cuomo to set up additional wage boards to recommend higher wages in those fields. Cuomo has criticized fast-food wage levels, saying that taxpayers – through food stamps and Medicaid – were subsidizing giants like McDonald’s, that were not paying workers enough to support their families.

After the wage board made its $15 recommendation, Cuomo said triumphantly: “When New York acts, the rest of the states follow.”