London activists have found a creative way to subvert the proliferation of metal studs and other devices purposely designed to discourage homeless and other people from occupying public spaces. The collective, called Space, Not Spikes, is transforming them into cozy bedrooms, complete with tiny libraries. Anti-homeless spikes and an anti-loitering device that only teenagers can hear are part of a movement some have defined as “defensive architecture.” 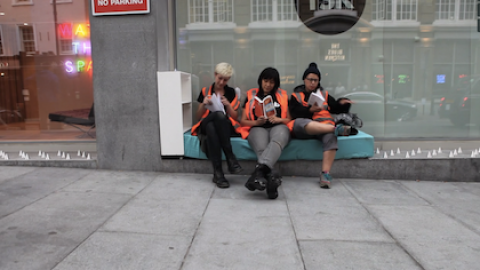 The Space, Not Spikes collectives has found a creative way to subvert the tactic of using sharp spikes to discourage loitering in public places., Leah Borromeo on Flickr

London has taken to placing small, sharp spikes to discourage homeless people from sleeping in public areas. But a group of activists has found a creative way to subvert the tactic: transforming them into cozy bedrooms, complete with tiny libraries.

The collective, called Space, Not Spikes, wants to make a point: the hostile metal studs and other devices purposely designed to drive people away are not okay.

The group chose the spiked nook in Curtain Road, in the eastern neighborhood of Shoreditch, and glued on a mattress and the small bookshelf, with some available books for the public.

Leah Borromeo, one of the activists involved in the protest, explained to Quartz that the germ of the idea came when the group overheard a couple of women coming out of a store, laying their shopping bags over the spikes on the ledge so they could sit there.

“That got me thinking that these spikes, which have so aggressively been laid to keep the ‘wrong’ sort of people out, or even just to deter people from having a sit-down, needed to be neutralized,” she said.

London’s anti-homeless spikes—along with anti-loitering Mosquito device, which emits a sound that only teenagers can hear, and purposively uncomfortable benches—are part of a movement that some have defined as “defensive architecture.”

The group plans to keep on attacking the spikes until they get removed “as architectural options for public and private spaces.”

[Maria Sanchez Diez is a news intern at Quartz]