A woman’s decision to donate her aborted fetus to medical research—and Planned Parenthood’s willingness to transfer the fetal material—is deeply commendable. No woman is eager to have an unwanted pregnancy, but if she decides to terminate it, Planned Parenthood can help turn her misfortune into a mitzvah. That is not an act of killing. It is an act of altruism. 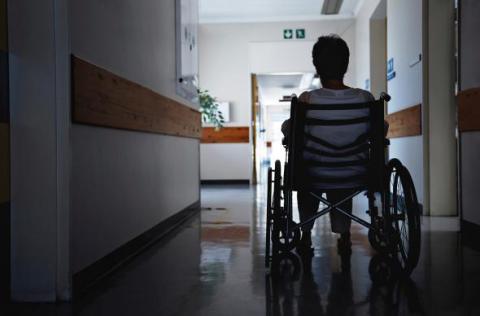 Stem cells hold terrific promise for the treatment—and, eventually, the defeat—of ALS., shapecharge/Getty Images
For five years, I watched my best friend die of amyotrophic lateral sclerosis, a terrible disease that causes one’s muscles to waste away. First he struggled to walk, then to speak, then to breathe. One tube pushed air into his lungs; another pushed nutrients into his stomach. Toward the end, he could only move his eyes. ALS does not affect the brain; through it all, he remained perfectly aware of his slow-motion torture. After years of suffering, he died of respiratory failure, his body skeletal and ravaged, his mind alert to his suffocation until the last moments of life.
There is currently no cure for ALS. There will be some day. And that cure may very well be derived from stem cells taken from aborted fetuses.
I can’t help but remember that fact when I watch the videos, taken by undercover anti-abortion activists, of Planned Parenthood technicians discussing how to preserve fetal tissue to be donated for research. The graphic images of aborted fetuses are meant to disgust me, to convince me that abortion is a barbaric act of killing. But I don’t see death in these videos. I see hope.
ALS kills people by causing their motor neurons to degenerate. These neurons go from the brain to the spinal cord, then travel from the spinal cord to muscles throughout the body. When they degenerate, you lose the ability to control voluntary muscle movement. Eating, talking, swallowing, breathing: All of these functions rely, to some extent, on healthy motor neurons. When you can no longer move a muscle, it atrophies. Eventually, your respiratory muscles can no longer contract, and you suffocate.
Stem cells hold terrific promise for the treatment—and, eventually, the defeat—of ALS. The most useful stem cells are found in fertilized embryos and fetuses, where they haven’t yet developed into specialized cells. (Scientists can also reprogram adult cells to act like embryonic stem cells, but these reprogrammed cells, while useful for research, have not been shown to be therapeutically safe.)
The first Food and Drug Administration–approved clinical trials to treat ALS with fetal stem cells are already underway. Any treatment derived from fetal tissue is many years away at best, but the early research has been a success. Stem cells injected into ALS patients’ spinal cords have survived for years and have caused few side effects. The cells seem to protect diseased motor neurons, stimulating their survival. With motor neurons restored to health, muscle atrophy slows or ceases. The experimental treatment slowed or reversed the progression of the disease in several patients in a small Phase I clinical trial.
One patient, whose muscles had degenerated to the point that he couldn’t walk without a cane, abandoned his cane months after the trial began. He later participated in a 2.5-mile walkathon. That was in 2011. He remains alive and well today. The treatment also effectively halted disease progression in the other five patients still in the early stages of ALS. It was a stunning leap forward in ALS treatment. A Phase 2 trial, with new patients, further demonstrated the safety and effectiveness of the therapy; symptoms improved in seven of 15 patients.
One of the many discoveries researchers made in preparing for the first trial was that fetal stem cells seemed to be the best stem cells for ALS treatment. After extensive animal testing, researchers found that embryonic stem cells sometimes turned into cancer cells. Fetal stem cells, on the other hand, are older—and thus on their way to an identity. For their trial, researchers used stem cells that were beginning to develop into nerve cells. They didn’t develop into cancer. Instead, they seemed to support dying neurons and restore motor function.
I know about this trial because my friend applied to participate in it. He was turned down: His was deemed too atrophied to be helped. He died shortly after the trial began.
This research might have been advanced enough to include him if Ronald Reagan and George H.W. Bush hadn’t banned federal funding for research on fetal tissue from abortions. (The research progressed once Bill Clinton reversed the ban.) More recently, fetal stem cell research has been less controversial than embryonic stem cell research. That may be because fetal stem cells are taken from fetuses that have no more potential for life. Embryonic stem cell research, which generally requires the destruction of the embryo that could theoretically be implanted and develop, has lately drawn much more debate and political attention. Now activists have shifted the attention back to fetal tissue donations, which allows them to show gruesome images of aborted fetuses—a time-worn and very effective anti-abortion strategy.
Although I have no patience for those who claim, incorrectly, that Planned Parenthood sells fetal tissue, I sympathize with those who feel distress or moral outrage at the sight of an aborted fetus. Still, to my mind, a woman’s decision to donate her aborted fetus to medical research—and Planned Parenthood’s willingness to transfer the fetal material—is deeply commendable. No woman is eager to have an unwanted pregnancy, but if she decides to terminate it, Planned Parenthood can help turn her misfortune into a mitzvah. That is not an act of killing. It is an act of altruism.
Mark Joseph Stern is a writer for Slate. He covers the law and LGBTQ issues.