New NLRB rules quicken the union election process between petitioning the NLRB for an election and the election itself - leaving less time, the unions say, for union-busting intimidation. 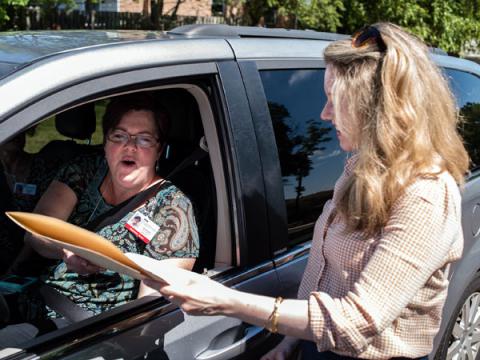 Nurse Heather Jones-DiRosa (left) takes a letter from union organizer Meghan Lane. The letter was to Eagleville Hospital on behalf of its nurses, who voted Thursday to form a union. New rules quickened the process., Photo: Matthew Hall/For The Inquirer)

On Thursday, Bill Cruice had his first "quickie" and it was good.

Now for definitions: Cruice is executive director of the Pennsylvania Association of Staff Nurses and Allied Processionals (PASNAP), the union that, as of Thursday, represents 100 nurses at Eagleville Hospital in Montgomery County.

"Quickie" was the pejorative name given by opponents to sped-up union election procedures enacted by the National Labor Relations Board on April 14.

As for good, "it's a good feeling that the workers are going to have a better chance" at having a union, said Cruice, who has led 35 organizing campaigns.

From his viewpoint, the results also are good - 73 in favor, eight opposed, and 10 contested likely yes votes.

"While we are disappointed, we will be negotiating with elected representatives," a hospital spokesman said Friday.

The new rules quicken the process between petitioning the NLRB for an election and the election itself - leaving less time, the unions say, for union-busting intimidation.

Opponents, including the U.S. Chamber of Commerce and other business groups, say the new rules don't give employers time to convince workers that unions won't help them.

"If you have a short time, the tone changes. It becomes harsher. You don't have time for the niceties," said Brent Yessin of Yessin & Associates, a Florida firm that consults with companies hoping to avoid unions.

Cruice, a lawyer, explained the changes: Under the new rules, an election petition filed with the NLRB leads to a hearing within eight days to set an election date. Then and now, both sides try to agree on the election date and who should be allowed to vote.

In the past, if there was an agreement, the election would be held in about 42 days. That's been shortened to "the earliest date practicable."

Under the old rules, if the two sides couldn't agree, the election process would halt during a long course of appeals and brief-filing.

Under the new rules, most of the preelection arguing and brief-writing has been eliminated, particularly if the contested group of workers is so small that it wouldn't likely affect the outcome. Employers can contest those ballots at the end.

Nurses unhappy with working conditions at the nonprofit drug, alcohol, and psychiatric hospital called the union.

On June 11, union organizers met nurses at the Keystone Grill in Norristown.

There, the nurses received their inoculations over fried onion rings and mugs of coffee.

"In some ways, it's no different from a nurse inoculating someone with a vaccine," Cruice said. "This is our vaccine, inoculating them against the poison" from management.

What they heard from union organizers was a list of all the bad things that might happen to them once they filed an election petition with the NLRB.

The nurses learned about harsh one-on-one meetings, about the possibility of being closely monitored at work, about how officials might plead for a chance to make things right, how people might be fired for minor infractions previously tolerated, how shifts might be changed to hurt ringleaders.

Cruice said unions, worried about intimidation, usually won't present an election petition unless they have 60 to 70 percent of the workers signing it. That's what the union had when it filed with the NLRB on July 29for the Eagleville nurses. The election was set for Thursday.

The difference, union organizer Mark Warshaw said, was that it was over in 22 days.

"Once [workers] see a light at the end of the tunnel and it's coming soon, they are able to withstand anything," he said. "When it's dragging, month after month, it's more difficult."

Nurse Heather Jones-DiRosa said she loves her job and wants communication, scheduling, and morale problems to be resolved. "People are still nervous and afraid of retaliation," she said. "I'm thankful it's over. It's been an unsettling time. We want to get back to caring for our patients."