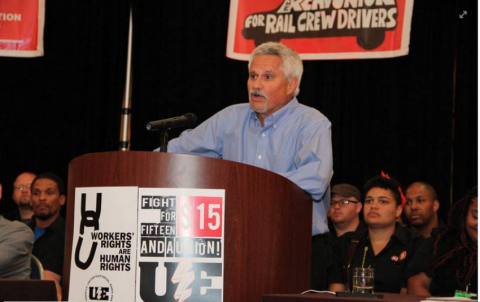 Kingsley gives his final address as the union's Director of Organization at the UE national convention., UE / Facebook

The Monday afternoon session of UE’s 74th National Convention was devoted to the report on organizing and adopting the organizing plan for the coming two years, as well as a resolution calling for reform of the nation’s labor laws to restore the right to organize.

Kingsley began by reporting on the UE Young Activist Program, now in its sixth year, with participation from 24 locals in the past two years. It includes young members who were arrested at the Vermont state capitol last winter “when they sat in to say that health care should be a human right, that people should come before profits”; young members in Chicago also also arrested for civil disobedience the previous winter “when they put their bodies on the line to defend the rights of immigrant workers”; and  “young members from all over the country who marched for peace in New York City , rallied for a fair contract at GE, organized support for striking bus drivers, and are learning through action the  key skills needed by all union leaders.”

He said the Young Activists would be leading the convention later in the afternoon in a march and rally at Baltimore City Hall in support of Black Lives Matter and the Fight for 15 and a Union.

Kingsley then called to the stage the young activists participating in the convention, and delegates gave them a standing ovation as they marched to the stage.

“Last year corporate profits were at the highest level in 85 years,” he said, “and employee compensation was at its lowest level in 65 years. The trend toward greater inequality in our society continues. Let me give you just one number to think about. $18,897. If there had been no growth in inequality in America since 1979, the typical middle-income household would be $18,897 better off today.”

What’s happened instead, he said, “is that nearly all the new wealth created in America is going to the very wealthiest. The rich are getting richer and the rest of us getting poorer.  99% of all new wealth created since the 2008 recession has gone to the top 1%.” Meanwhile, 40 million Americans work at minimum wage. The ratio of CEO pay to worker pay is now 373 to one.

“How did things get this bad?” Kingsley asked. “This much is clear. We aren’t as organized as we used to be. We aren’t protecting our share of the pie. In a little more than a generation we’ve gone from an America in which one in every three workers was in a union to one in which it’s one in every nine… The less we are organized, the more we will be exploited.”

“The answer, of course, is to organize. Build our union,” Kingsley said “The problem is our path is often blocked,” and he went on to offer examples of the fierce and often illegal tactics that bosses have used in their efforts to block UE organizing over the past two years.

“Politicians are another matter. They’ve gone hog wild attacking workers and workers’ rights since the koch brothers and other billionaires bought the last elections. Some of these politicans are just plain foaming at the mouth.” He referenced the governor of Wisconsin, now running for president, who compared union members to terrorists. “Another one said he wants to punch us in the face.”

Workers’ rights protections, said Kingsley, are now under assault in one state legislature after another.  He recalled attending a big rally in West Virginia, where members of UE Local 170 and other unions are resisting a Republican/corporate push for right-to-work legislation.

Kingsley praised the Fight for 15 movement, which is organizing big actions and putting a national spotlight on the plight of poverty-wage workers.  “Most of the workers involved in our substantial or successful campaigns earned less than $15 an hour.  The low paid portion of the workforce is the most willing to take risks, most willing to take action. It’s where the action is.”

“Overall, UE has added members in eight states since our last convention. We have signed five first contracts; five more are pending,” he said. The biggest win was in California, where 600 Renzenberger rail crew drivers voted 2 to 1 for UE in an NLRB election. “The big California win spawned other organizing wins at Renzenberger,” in Nevada, Ohio, and probably in Illinois, where we’re still waiting for the NLRB to issue a final vote count.

Today, he said, UE has a master agreement covering many of our new members at Renzenberger, and a new UE conference board “representing more than a 1,100 drivers across six states who have joined UE. The conference board, which held a meeting at the convention, will coordinate the work of our locals and allow to use our expanded numbers at Renzenberger to give us maximum leverage with the company.”

He then reported on internal organizing in Iowa and West Virginia that “added more than 100 new members in each of these states.”  Another win in Connecticut brought the Colchester dispatchers into Local 222.

Kingsley then reported on UE’s ongoing organizing work in General Electric, where we leafleted and made contact with workers at 17 non-union plants and “also did in-depth work to build a corps of union supporters at GE’s new locomotive plant in Texas, where workers are paid only about half what our members earn at the Erie plant.

UE also supports pre-majority members-only local unions at GE in Grove City, PA and at Cummins Diesel in Rocky Mount, NC. UE works with Warehouse Workers for Justice to advance the struggle of precarious workers in the logistics industry. And we’re used international solidarity connections to aid in organizing.

Kingsley lauded the rank-and-file volunteers from Local 208 in Vermont and 1008 in California who helped with the Nebraska win, as well as Local 1177 members from Renzenberger Chicago whose visits helped secure the California and Ohio wins. Kingsley thanked volunteer organizers from several other locals who assisted in UE’s organizing work in recent months. “More than 150 members from three dozen locals volunteered to organize during the past two years.” Kingsley asked all of them who were present in the hall to stand, and they received the applause of the convention.

Kingsley also praised “the hard work and dedication” of the UE staff, and the delegates applauded the staff for its work.  He then referred delegates to the proposed organizing resolution, “a blueprint for our work over the next two years. This resolution was reviewed, amended and recommended by the convention organizing committee. Its resolves are very similar to those in our existing national organizing plan. They include a couple of additional points of emphasis: broader organizing efforts among federal contract employees; continuing our internal organizing work.”

All in all, this plan lays a solid foundation for our union-buidling work. It also leaves ue leadership the flexibility to make some adjustments. A little flexibility is in order as this national organizing plan truly represents our hope for the future.

Kingsley wound up this portion of his report by discussing UE history. “Even the oldest among us are too young to remember the heydey of UE in the ‘30s and ‘40s when all signs pointed up, when we were the first union chartered by the CIO, when we grew to more than a half a million members. All of our memories are of UE’s struggle to survive. A few can still remember how we strurggled to survive the attacks by the government, the church and other unions that devastated and decimated us in the ‘50s. More can remember how we struggled to survive the economic carnage of plant closings in the ‘80s.”

"All of us know how today we struggle to survive a billionaire-funded barrage of corporate and political attacks aimed at neutering or eradicating us," Kingsley continued. "Yet, we’re still standing.  We’re still standing. More than 50 national unions – half the unions in America – have merged or folded in the years I’ve been doing this job.  We haven’t. We’ve fought. We’ve organized 30,000 workers under our banner.  With all the churn and change and clsoings we’ve experienced, that’s what it has taken just to maintain our early ‘90s membership levels."

“But we’re still standing.  Our survival is our success.” Kingsley credited UE’s survival to its “four pillars: aggressive struggle against the boss, a never-ending effort to organize the unorganzied, independent political action and international labor solidarity.  We need them all for UE to be UE.”

“We know what to do when they do us wrong. We grab onto their leg like a junkyard dog and we don’t let go until a measure of justice is won. That’s who we are. That’s why there is hope.

"Long live UE. Best damn union in the country!” As he concluded, the delegates rose for a prolonged applause.

Kingsley then called the Young Activists to the stage. Diamond Almedarez, Local 1008, reported on the classes the Young Activists had participated in the previous Friday and Saturday, and Elizabeth Nikazmerad, Local 203, and Don Harris, Local 150, supplemented her report and talked about the outreach they did to warehouse workers in Baltimore, and the Young Activists’ commitment and energy. We need to fight institutional racism, sexism and class inequality, said Nikazmerad, “And Young Activists will lead the way.” Harris asked if delegates are ready to make “the greedy corporations” pay more than a $7.25 minimum wage. “We need to start it at $15, and we need to let Baltimore now we’ve got their back.”

HEARING FROM THE NEWLY ORGANIZED

Next, Kingsley called representatives of the California Renzenberger workers of the stage. International Rep. Mark Meinster and Field Organizer Fernando Ramirez gave background on the campaign. Then Missy Gollager, Local 1077, talked about their five-year struggle to get into UE, their contract gains, and winning back the jobs of 17 fired workers with back pay. Ron Russell of Local 1077 also spoke.

Field Organizer George Waksmunski gave the background on organizing among Renzenberger drivers in Belleview, Ohio, and a leader of the drivers, Randy Alvord, spoke about the low pay and other issues that sparked the organizing.

One of the newly-organized Renzenberger drivers from Mansfield, OH spoke to the delegates via video, as did representatives of the new members in Iowa, West Virginia and Connecticut.

International Rep. Karen Hardin introduced the new members of UE Local 808 at the Nebraska Service Center. Lacey Harry described workplace injustices that led the workers to call UE and fight to get the union. “Ever since UE came into our lives we have hope,”  she said. Vickie Hilton talked about how workers fought back against the employer’s anti-union campaign. When management described the union as an outside entity, “we responded, ‘We are the union and we are here to stay.”

The convention recessed until Tuesday morning, and delegates headed outside to assemble for a march and rally at Baltimore City Hall.