Mullins asked for their latest comments on current proposals to preserve the area, focusing on the 1,600-acre Blair Mountain Battlefield National Register of Historic Places Nomination Area, or the BMBNA. The companies interested in mining the area include: Aracoma Coal Co., a subsidiary of Alpha Natural Resources; Mingo Logan Coal, a subsidiary of Arch Coal; and WPP LLC, a coal-leasing company with offices in Delaware. 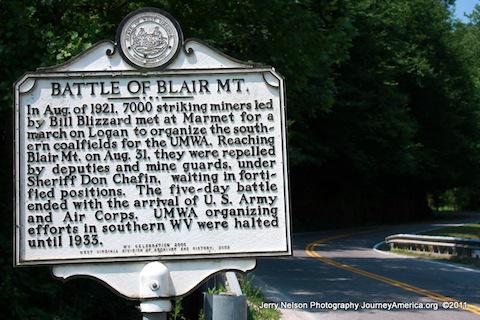 Vigorous debates continue about how extensively the historic Blair Mountain Battlefield, the site of the largest armed confrontation in American labor history, should be preserved.

The United Mine Workers and Friends of Blair Mountain, two major parties in the ongoing debate, want to prevent strip mining from damaging the battlefield itself and other areas surrounding it.

The March on Blair Mountain began in Marmet, and ended up at the mountain on the border of Boone and Logan counties.

The miners aimed to march to Logan and Mingo counties to unionize mines there. The battle ended only after federal troops arrived.

Many local and national groups focusing on history and the environment want strict regulations to continue to preserve the historic area.

Ginger Mullins, chief of the Army Corps of Engineers Regulatory Division in Huntington, sent out letters on July 21 to union, environmental and community groups that have opposed allowing mining on the historic Blair Mountain Battlefield.

Mullins asked for their latest comments on current proposals to preserve the area, focusing on the 1,600-acre Blair Mountain Battlefield National Register of Historic Places Nomination Area, or the BMBNA.

The companies interested in mining the area include: Aracoma Coal Co., a subsidiary of Alpha Natural Resources; Mingo Logan Coal, a subsidiary of Arch Coal; and WPP LLC, a coal-leasing company with offices in Delaware.

The West Virginia Department of Environmental Protection issued an order on April 29, prohibiting Alpha Natural Resources from mining within 1,000 feet of the historic site -- until at least 2018.

The DEP said their order affects between 50 and 60 acres of Alpha's 1,100-acre Camp Branch surface mining permit. That area was part of the southern part of the historic Blair Mountain Battlefield.

Laura P. Karr, a lawyer for the United Mine Workers, outlined the union's position in a letter she sent to the Army Corps on Thursday. The union letter urges stricter regulations to preserve the historic battlefield area.

Karr and other critics focus on a recently released agreement that is still in draft form.

The proposed agreement, Karr writes, "represents a significant step forward in the process of preserving parts of Blair Mountain," but it also "presents several opportunities for improvement."

The union's letter mentions the wide array of historic artifacts already discovered in the area. But Karr argues there is a need to continue to preserve "previously unidentified significant archaeological properties" from any further destruction.

Allowing increased mountaintop removal mining near the actual historic area being preserved, the Karr argues, might also destroy the historic and natural beauty of the area that helps attract tourists.

"The [Army] Corps has the opportunity," Karr writes, "to ensure the actual preservation of vital historical resources within the BMBNA by prohibiting surface mining on the property."

The area that could be impacted by proposed surface mining, Karr's letter adds, already "has been determined by the West Virginia State Historic Preservation Office and the Advisory Council on Historical Preservation to have significant historical value."

Back in August 2013, Karr wrote to the Army Corps, saying, "Some historians recognize the Battle as a principal catalyst for passage of the National Labor Relations Act [in 1935], the federal statutory framework for worker organizing and the peaceful resolution of industrial disputes.

"The Act enabled the coal miners of southwestern West Virginia and millions of other American workers to organize into unions," Karr wrote.

Charles B. Keeney III, chairman of Friends of Blair Mountain, also wrote to Mullins at the Army Corps last week.

Keeney argues that Blair Mountain and the areas surrounding it should not be disturbed.

"Ridges, hollows, stones, specific clusters of trees, specific angles of the slope all combine to reconstruct a history not possible through primary documents and impossible to recreate in the [mine] reclamation process."

Some analyses on potential mining near Blair Mountain, Keeney argues, make "no significant attempt to assess the value and potential impacts to the archaeological value of the entire landscape."

Friends of Blair Mountain recommends the creation of a Blair Battlefield Commemoration Committee before any final decisions are made about pending mining permits.

The proposed 11-member committee would include representatives from coal companies, the DEP, the Army Corps and historic preservation officials. It would also have three academic scholars with doctorates in history, archaeology or related fields.

For more information on the Battle of Blair Mountain and the efforts to stop the strip mining of Blair Mountain please go to http://archive.archaeology.org/1201/features/blair_mountain_coal_activism_west_virginia.html