Re: The Kansas Abortion Vote Was a Stunner. But What Does It Mean for the Midterms? (Daniel Millstone)
Go Directly to Jail  --  Josh Gosfield cartoon
Re: Bernie – What’s Missing From the Reconciliation Bill (Daniel)
Re: Landmark US Climate Bill Will Do More Harm Than Good, Groups Say (Jennifer Nouri)
Re: ‘There’s Never Been Anybody Like Him in the United States Senate’ (Van Gosse)
This Is An Outrage  --  cartoon by Mike Luckovich
Re: This Hiroshima Day We Must Wake Up to the Real Danger of a Nuclear War (Noel Kent)
Re: Ukraine and the Peace Movement (Dan La Botz and Stephen R. Shalom; Charles Patrick Lynch)
Re: David Moberg, 1943–2022 (Carole Travis)
Re:  NLRB Orders UMWA To Pay Strike Costs (John Thompson; Kipp Dawson)
Toilet Plunger  --  cartoon by Rob Rogers
Re: Lev Gleason: Crime (Hank Kennedy)
Re: Guns ’n’ Roses (Erika Holmstrom)
Re: Why Sci-Fi Movie Prey Moves the Needle for Indigenous American Visibility (Shawna McKellar)

How much will you save with Medicare for All? (Medicare 4 All Update Group)

Re: The Kansas Abortion Vote Was a Stunner. But What Does It Mean for the Midterms?

Wasn’t the outcome in Kansas a pleasant surprise? How can we learn from the vast outpouring of pro-abortion voters? How can we use that to push back against the right everywhere? Thanks to Portside https://portside.org/2022-08-04/kansas-abortion-vote-was-stunner-what-d… for the link. In the comments? A link to a Twitter thread about the messaging pro abortion folk used in Kansas put together by Bill Scher https://www.facebook.com/billscher and sent along by Sarah Steiner. https://www.facebook.com/SarahSteiner 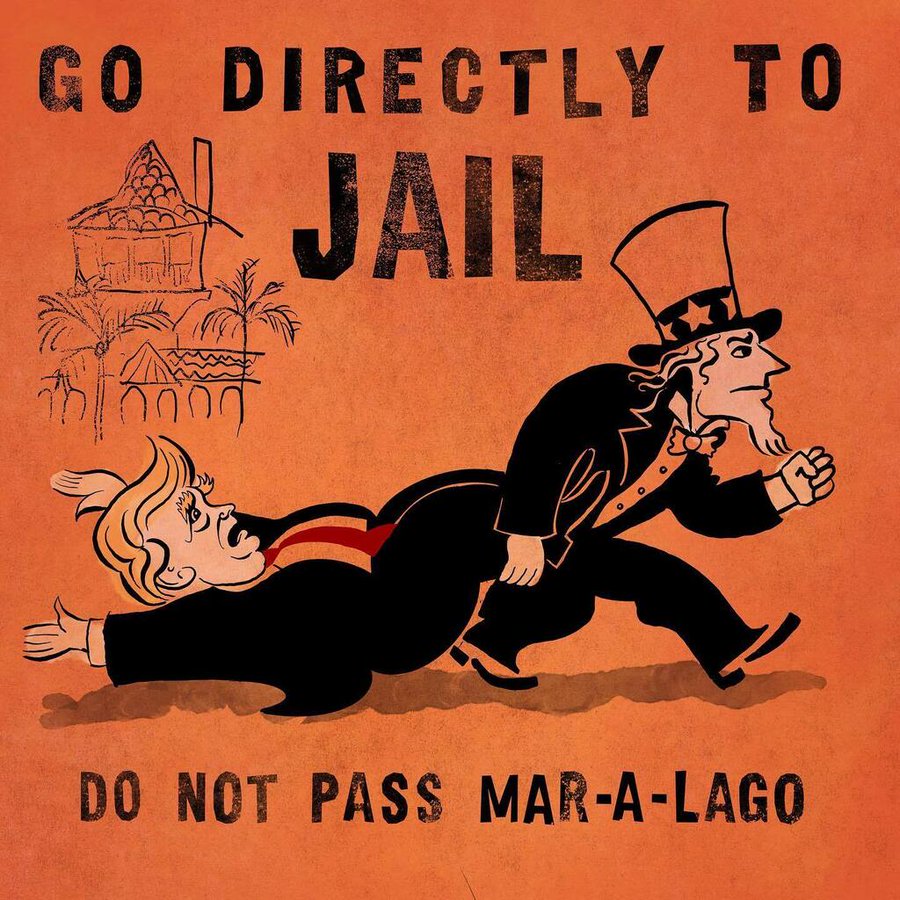 Re: Bernie – What’s Missing From the Reconciliation Bill

Via Portside, https://portside.org/2022-08-09/bernie-whats-missing-reconciliation-bill U.S. Senator Bernie Sanders https://www.facebook.com/senatorsanders explains what’s missing from the big bill that just passed the senate and what’s included. Unless and until we can defeat Trump Senators and Congress members, all measured will die the death by filibuster that the cap on insulin prices did. With a somewhat less reactionary Senate, we can press for an end the filibuster which will allow for further change we need.

Re: Landmark US Climate Bill Will Do More Harm Than Good, Groups Say

The only way to get this bill passed was to kiss up to big oil.

Re: ‘There’s Never Been Anybody Like Him in the United States Senate’

A hell of a story, really

This Is An Outrage  --  cartoon by Mike Luckovich 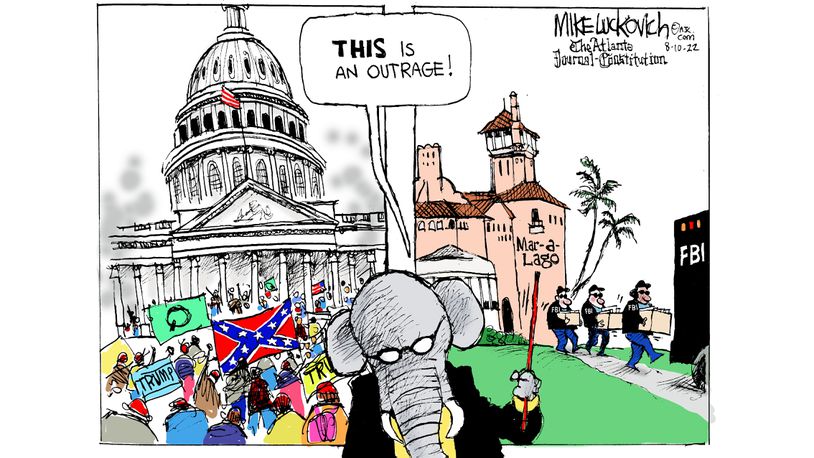 Re: This Hiroshima Day We Must Wake Up to the Real Danger of a Nuclear War

This is a crucially critical article for everyone to read.  We are now sixty years from the October 1962 Cuban missile crisis.   Older people like myself may reflect on those terrifying days when the U.S. and Soviet Union faced off in the Caribbean.  We learned later that only the cool thinking and courageous action of a few people saved us from a catastrophe.  The Cuban  missile crisis demonstrated how fragile peace is in the Nuclear Age and how close we are to demolishing our civilization.

But the lessons haven't been learned or acted upon.

Thanks for the article.

Re: Ukraine and the Peace Movement

In the August 4, 2022 issue of Portside “Tidbits” several readers criticized our article “Ukraine and the Peace Movement” that was reprinted in Portside on July 29. One reader called our piece a “viciously rightwing article” and other readers accused us of apologizing for U.S. imperialism. One critic wrote that he takes political leadership in international affairs from Cuba, as perhaps he did when Fidel Castro supported for the Soviet invasion of Czechoslovakia in 1968. We believe in thinking for ourselves rather than taking political direction from any government.

Let us set the record straight. We agree with our critics on many points. We are both longtime, lifetime socialists and anti-imperialists who have opposed U.S. intervention abroad since we first became active around opposition to the U.S. war on Vietnam. We opposed the U.S. wars in Central America and the invasion of Iraq. Like our critics, we believe that the United States remains a rapacious and dangerous imperial power and that NATO should be replaced with structures of common security.

Yes, we know that there are far right organizations in Ukraine, but there are also socialists and an independent labor movement that while fighting Putin also resist Zelensky's neoliberal, anti-labor legislation. To a few of our critics, who seem to be sympathetic to Russia, we would point out that Putin is an autocrat who has created a regime where political opponents are jailed and labor organizations coerced.

Where we disagree with our critics is that we insist on the right of the Ukrainian people and their nation to fight to defend their independence against the Russian invasion, occupation, and attempt to dismember their country. We believe that supporting Ukrainian self-defense means supporting their right to receive arms wherever they can. We stand with the former Russian colony against imperialist Russia, as we stood with Vietnam against the imperialist United States. It is not a rightwing position to support the resistance to imperialist aggression.

Great to see so many people speaking for peace who understand that peace is not about winning wars, it is about stopping them. Cause that is the real victory.

David wrote a story about Electro-Motive Division of General Motors where we built locomotives outside of Chicago in LaGrange and Pullman. Our situation was troubling and complex. David listened deeply, and told the full story, the nuanced complex story in readable language. He was brilliant, kind, self effacing and an excellent journalist. Love to Jo, Sara, and Carl. Condolences for their and all our loss.

How could this happen under most pro-union president since FDR?

“This is a slap in the face not just to the workers who are fighting for better jobs at Warrior Met Coal, but to every worker who stands up to their boss anywhere in America,” UMWA International President Cecil E. Roberts said. “There are charges for security, cameras, capital expenditures, buses for transporting scabs across picket lines, and the cost of lost production.

“What is the purpose of a strike if not to impact the operations of the employer, including production,” Roberts asked. “Is it now the policy of the federal government that unions be required to pay a company’s losses as a consequence of their members exercising their rights as working people? This is outrageous and effectively negates workers’ right to strike. It cannot stand.” 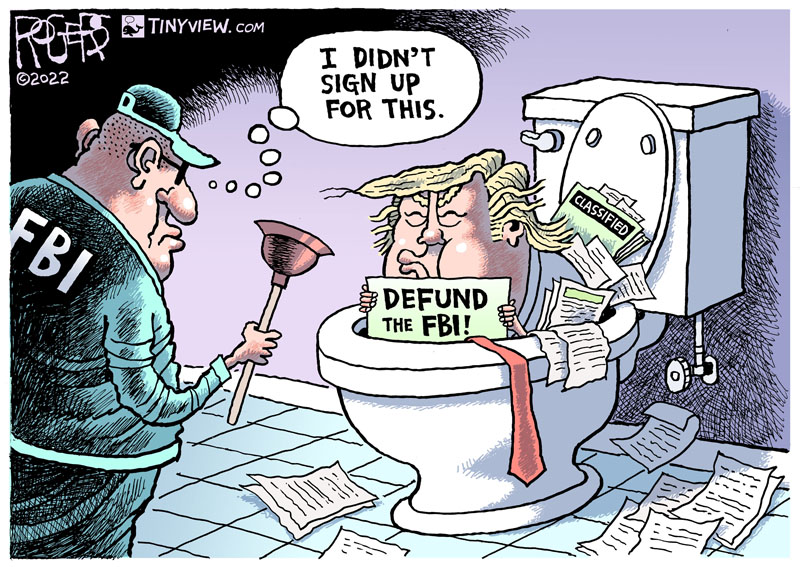 The British campaign consistently based its criticisms on a knee jerk anti-Americanism, castigating crime and horror comics as “American style” comics. They also based some of their analysis on fundamental misreadings of EC Comics stories which were often progressive. Fredric Wertham, who was cited by every anti comics campaigner included every kind of comic, including the mild Batman and Superman stories into his condemnation of “crime comics”. Finally, British comics like Battle Action or 2000AD in the 70s and thereafter contained their fair share of violence with no corresponding upkeep in violent deaths.

I don't know if anyone will read this but if you do, thank you for writing that moved me.

Thank you for stirring something in me to understand how there is so much more than just a story.

Re: Why Sci-Fi Movie Prey Moves the Needle for Indigenous American Visibility

I hate movies like Predator. I never saw the others, but this one, my brother insisted I see with him and I loved it! It is beautiful to watch, it has great characters, and it is frequently historically accurate. I would definitely recommend it.

How much will you save with Medicare for All? (Medicare 4 All Update Group)

Below is a link to the new MEDICARE FOR ALL CALCULATOR, with which anyone can input their current health costs, and find out what they will save under a single payer system.

It was designed for Californians, but is useful for everyone.

Check out how improved Medicare for All with progressive financing will affect your household medical costs.

This translates the recent Healthy California for All Commission findings into a net cost for households.

Spoiler alert: The vast majority of families will save money. This is because the tax plan (which replaces premiums and out-of-pocket costs) protects low and middle income families. (More detail in the calculator FAQs.)

Lessons From The 2022 National Strike In Ecuador will be a public webinar in English and Spanish on the Indigenous-led protests in Ecuador this past June.

For 18 days in June, the people of Ecuador, led by the Indigenous and poorest, fought austerity to a halt. Tens of thousands barricaded highways, paralyzed the capital and much of the nation. Eight people were killed and hundreds injured by police. Led by the Confederation of Indigenous Nationalities of Ecuador (CONAIE), poor and working people won major economic and political concessions, and other demands are in negotiation.

This webinar will present the voices of Indigenous leaders and grassroots activists that participated in these historic protests.

Floresimo Simbaña of Conaie Comunicacion will present an overall analysis of the protests, what happened, what was achieved, and what comes next. Simbaña is a top leader of CONAIE and is a well known and respected analyst and author.

Kasha Rojas, Toa Tituaña, Miguel Guaichico are local leaders. They will speak about the basic practicalities of organizing support, turnout, and logistics for the national strike (known in Ecuador as El Paro), marching to Quito, protesting within Quito, and facing violent government repression.

The webinar will also feature dramatic images from the protests. This webinar is jointly organized by the DSA International Committee and Code Pink.

The webinar will also feature dramatic images from the protests. This webinar is jointly organized by the DSA International Committee and Code Pink. 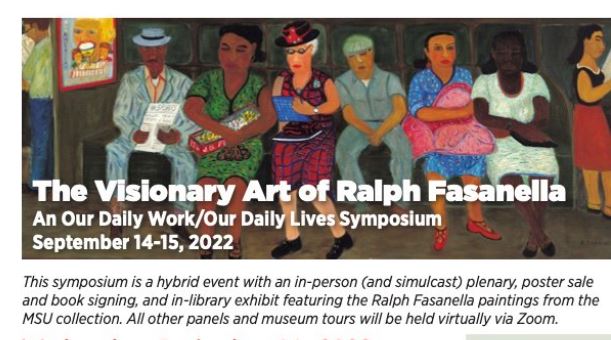 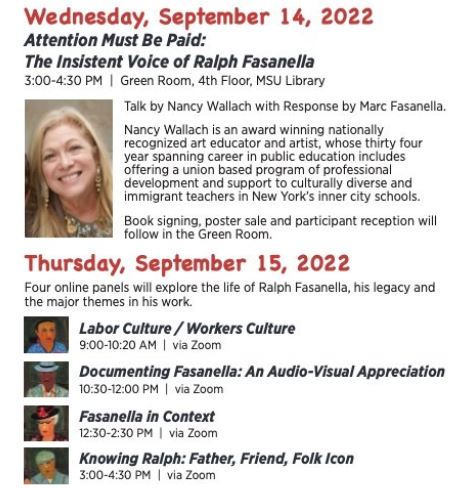 "The Visionary Art of Ralph Fasanella" which will be Zoom and live/streamed from Michigan State University in September. All sessions are free, but you must register here to receive the link.

This symposium is a hybrid event with an in-person (and simulcast) plenary, poster sale and book signing, and in-library exhibit featuring the Ralph Fasanella paintings from the MSU collection. All other panels and museum tours will be held virtually via Zoom.