film Review: ‘Rosenwald' on a Philanthropist Who Created Schools for Blacks in the Jim Crow South

It was when philanthropist Julius Rosenwald read Booker T. Washington's 'Up From Slavery' and then met the celebrated black educator on the campus of Tuskegee Institute that his life work came into focus. Rosenwald became passionate about providing funding for more than 5,300 schools in the Jim Crow South. At one point in the pre-civil rights era, it was estimated, one in three black youths in the South attended a Rosenwald school. 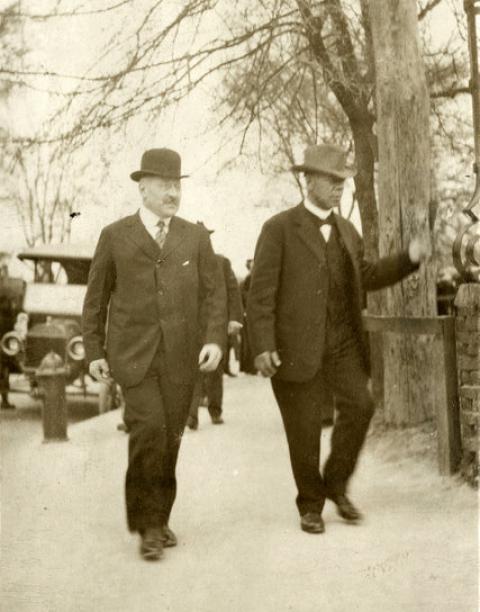 Julius Rosenwald, left, and Booker T. Washington at the Tuskegee Institute in Alabama in 1915., Credit University of Chicago Library/Ciesla Foundation

"Rosenwald" used to be a name to conjure with, but no more, and that is a shame this vivid, engaging documentary attempts to do something about.

In the early years of the 20th century, Julius Rosenwald was a philanthropist on a colossal scale, giving away what has been estimated as close to a billion dollars in today's money. But as revealed by writer-director Aviva Kempner, it's not just the amount of money he donated that makes Rosenwald special, it's the specifics of who he gave it to and how and why he did it that sets him apart.

How Rosenwald became wealthy enough to become a philanthropist is a classic immigrant story with some involving twists. His German-Jewish father, Samuel, became a peddler almost as soon as he got off the boat to America and ended up living in Springfield, Ill., in a house across the street from Abraham Lincoln's.

Julius, who never finished high school, met and formed a business relationship with master salesman Richard Sears, an innovative retailer who turned Sears, Roebuck into the Amazon of its day. Rosenwald helped take Sears public, an innovation at the time, and ended up as president of the company and one of the richest men in America.

Though he was known as a tough businessman, Rosenwald was also an observant individual who believed in the Jewish concept of charity as a religious duty.

But it was not only 1910, when he read Booker T. Washington's "Up From Slavery" and met the celebrated black educator on the campus of his Tuskegee Institute in Alabama, where the motto was, "We do everything we teach, and we teach everything we do," that Rosenwald's life's work came into focus. Partly at Washington's suggestion, Rosenwald became passionate about providing funding for black schools in the rural South, an area where a white hierarchy saw education as a threat to a docile work force.

Rosenwald's idea for funding was especially intriguing. He gave one-third of the money himself and demanded one-third from the local white community, which invariably meant state education funds.

The final third was to be contributed by the black community itself, which led to innovative fundraising and contributions in kind, which often included actually constructing the school building, all of which engendered enormous local pride in the school.

Before school construction ended in 1933, the Rosenwald Fund had built 5,357 schools and according to the film educated more than one out of every three black children in the rural South.

As if all this wasn't enough, Rosenwald extended his philanthropy into the African American community even further. In 1928 he started the Rosenwald Fund Fellowship, which provided grants to those with talent.

To tell this story, filmmaker Kempner interviews Rosenwald family members, historians such as Hasia Diner, and descendants of those touched by the schools or the grants.

To keep her film lively and involving and to illustrate what the old West was like for Jewish peddlers like Rosenwald's father, director Kempner has included clips from relevant feature films, including Gene Wilder's antics in "The Frisco Kid." Hearing a very young Clint Eastwood saying the Yiddish word "schlimazel" in an episode of TV's "Rawhide" is particularly priceless.

Perhaps the most pointed clip, however, is a newsreel moment of Rosenwald himself. "Don't believe because a man is rich he is necessarily smart," the philanthropist insists. "There is ample evidence to the contrary." More than being exceptionally philanthropic, Julius Rosenwald was also nobody's fool.

'Rosenwald' is playing now in New York City, Los Angeles and many other cities around the country.  Check your local listings.

[Kenneth Turan is film critic for the Los Angeles Times and National Public Radio’s Morning Edition as well as the director of the Los Angeles Times Book Prizes. He has been a staff writer for the Washington Post as well as the Times’ book review editor. A graduate of Swarthmore College and Columbia University’s Graduate School of Journalism, he teaches film reviewing and non-fiction writing at USC. His most recent books are “Never Coming To A Theater Near You” and “Free For All: Joe Papp, The Public and The Greatest Theater Story Ever Told.”]