books Big Science: Ernest Lawrence and the Invention That Launched the Military-Industrial Complex

Ernest Lawrence was a leading member of the scientific community that invented the atom bomb. He was also a pioneer in the growth of the military industrial complex. Michael Hiltzik tells this history in his new book. Sam Kean observes in this review that "there is much to admire and much to mourn" here, as we continue to live with the complex legacy of Big Science three quarters of a century after its emergence. 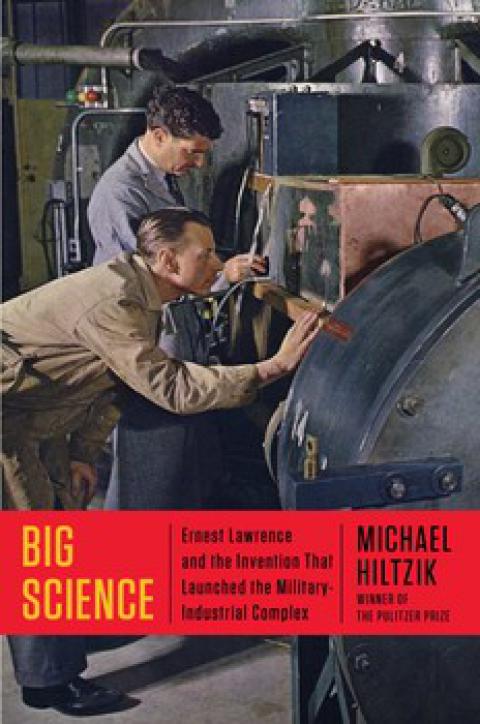 Big Science: Ernest Lawrence and the Invention That Launched the Military-Industrial Complex

In 1956, novelist Sybille Bedford mourned the passing of an era in physics—that age where “the laws of the universe were something a man might deal with pleasantly in a workshop set up behind the stables.” This was science as Newton and Darwin practiced it, a solitary genius matching wits with nature. No more. Nowadays, virtually all scientists collaborate, working in teams of three, four, a dozen others. A paper from a particle accelerator experiment or big genome project might include several thousand authors.

Ironically enough, as Michael Hiltzik explains in Big Science, this shift was itself largely the doing of a single genius. Ernest Lawrence is best known today for his 1931 invention of the cyclotron, a “proton merry-go-round” that accelerates subatomic particles, like protons, to high speeds. Located in the Radiation Lab at the University of California at Berkeley, where Lawrence conducted his experiments, the first cyclotron didn’t exactly scream Big Science—it was a mere 4.5 inches in diameter. But it proved remarkably effective for probing the structure of the atomic nucleus, which prompted Lawrence to build a larger model, at 11 inches. This proved still more effective, so he built a bigger one, and then a bigger one. Each new model—27 inches, 37 inches, 60 inches—gave Lawrence a glimpse of new vistas to explore. But the only way to do so was by building bigger and more expensive equipment.

Not that Lawrence considered this a problem. A tall, booming extrovert, he loved hobnobbing with university trustees and foundation presidents, and he wasn’t shy about asking them for gobsmacking amounts of money. Lawrence’s cyclotron eventually grew to 184 inches, and the budget for the Rad Lab swelled in lockstep, reaching millions of dollars per year. It took several dozen scientists to keep this behemoth running, and as Lawrence took on more and more assistants, his role shifted from scientist to professional manager—or as Hiltzik puts it, a professional ringleader, cheerleader, and science salesman.

Hiltzik, a business columnist for the Los Angeles Times, traces the birth of Big Science to this insatiable desire for bigger, better cyclotrons, and the scientific arms race that resulted. Although less lauded than, say, the revolutions of Copernicus and Darwin, the revolution that Lawrence initiated changed science in an equally important way, and as with any sea change, there’s much to admire and much to mourn. You can’t argue with the results, but Big Science forces modern researchers to spend most of their time writing grant proposals, managing personnel, and serving on committees—things the fabled gentleman-scientist working behind the stables of yore never had to worry about.

The transition to Big Science wasn’t instantaneous, though, and the ethos of the lone experimenter still permeated early cyclotron work—especially the lax safety rules. The cyclotrons’ huge magnets would send metal tools flying across the room like shrapnel, and the machines were so poorly insulated electrically that you could touch a light bulb to any nearby metal surface and make it glow. Cyclotron scientists were also pretty casual about the radioactive materials they studied. The zipper on one scientist’s fly got so contaminated with radioactivity that he was ruining experiments just by standing near them.

Hiltzik effectively contrasts the Rad Lab in Berkeley with the legendary Cavendish Lab in Cambridge, England. There, each scientist worked essentially alone, and the entire lab had a budget of just £2,000 pounds per year ($80,000 today)—less money, one Cavendish scientist noted, than some lords spend on tobacco. Embarrassingly, in the 1930s, Cavendish and other small labs beat Lawrence to several important discoveries, including the neutron and artificial radioactivity. Lawrence’s donors naturally began grumbling. Losing out on these discoveries also seemed to confirm old stereotypes that, compared with its European counterpart, American science had plenty of money and brawn but little brains.

Lawrence and his crew nevertheless kept pushing and building, and by 1940 made several major discoveries of their own, including carbon-14, a radioactive isotope crucial for both medical work and archaeological dating. Lawrence was awarded the Nobel Prize in Physics in 1939.

Lawrence’s career had reached its peak, but Big Science was just getting started. During World War II, the U.S. government began shoveling money into the Manhattan Project and other research—and amazingly, the good times kept rolling after the fighting ended, with government support for scientific research rising from $74 million in 1940 to $15 billion in 1965.

Big Science isn’t quite a biography of Lawrence, but Hiltzik delves deep into his personality. Like most geniuses, Lawrence was a man of both uncommon virtue and glaring faults. On the plus side, he cared little for personal prestige and worked doggedly to find good jobs for his graduate students. He also lacked pretension: when it came time to work, he’d strip off his suitcoat and get as grease-smeared as anyone. Above all, his technical skill and boundless optimism pushed his colleagues to incredible heights—12 other Rad Lab scientists won Nobel Prizes.

That said, Lawrence also helped inaugurate one of the ugliest aspects of modern academia—the ruthless exploitation of poorly paid graduate students. He also betrayed one of his oldest friends at Berkeley, physicist Robert Oppenheimer. The initial wedge between them was social. As Lawrence became famous in the 1930s, he began hanging out with bankers and oil tycoons. Oppenheimer, a Jew, found that world closed to him. But it was politics that really drove them apart. Lawrence, despite protesting that politics had no place in science, began drifting right, especially on the issue of atomic weapons. Hiltzik notes that Lawrence took “an increasingly obstinate position in favor of more weapons research and less introspection.” Oppenheimer, meanwhile, had long dabbled in lefty causes and, despite having run the Manhattan Project, opposed the creation of newer, bigger hydrogen bombs. So when hawks in Washington began smearing Oppenheimer’s reputation, Lawrence and his team—unlike most scientists—refused to defend him. When asked why, Lawrence snapped, “We’re the only ones who really know that man.”

Oddly, Hiltzik argues that the heyday of Big Science has ended. As evidence he cites the 1993 cancellation of the 54-mile-wide Superconducting Supercollider in Texas—a gargantuan version of Lawrence’s original 4.5-inch cyclotron. He also notes that lately government support for basic research has stagnated or even declined in some fields. But Big Science has hardly disappeared. Consider the multibillion-dollar Large Hadron Collider in Europe and the Human Genome Project in the United States, not to mention any number of space telescopes like the Hubble. Two multibillion-dollar neuroscience projects are also being planned here and abroad.

Then again, maybe the fact that Hiltzik overlooks these examples just reinforces the point of his book. Nowadays these enormous undertakings don’t seem out of the ordinary. We overlook them because we think that’s just how science gets done. And thanks to Ernest Lawrence and his proton merry-go-round, it more or less is.

Sam Kean is the author of two books on science history, The Disappearing Spoon and The Violinist’s Thumb.