Images of Czech police inking the skin of newly arriving Syrian migrants, and the government says they were unaware that this brought back memories of the Holocaust, when prisoners at Auschwitz were systematically tattooed. While in the north of Europe, in 24 hours, responding to a Facebook campaign, 10,000 Icelanders opened their doors to their Syrian brothers and sisters. 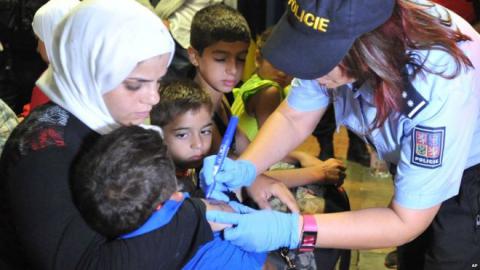 Migrants detained at Breclav station on Tuesday had numbers written on their skin with felt-tip pen. Images of Czech police officers writing numbers on the hands of migrants are an uncomfortable reminder of a different event and a different era.,AP photo // BBC News

Images of Czech police officers writing numbers on the hands of migrants are an uncomfortable reminder of a different event and a different era.

But the Czech authorities appeared totally unaware of the unfortunate visual connotations with the Holocaust, when prisoners at Auschwitz were systematically tattooed with serial numbers.

The Foreigners' Police said the priority in dealing with the 200 migrants at Breclav railway station, in the South Moravian region, was identifying them and trying to keep family members together.

This, said a spokeswoman, was a difficult task when many had no documents and did not speak English; hence the numbers in felt-tip pen on their arms.

But some are outraged. 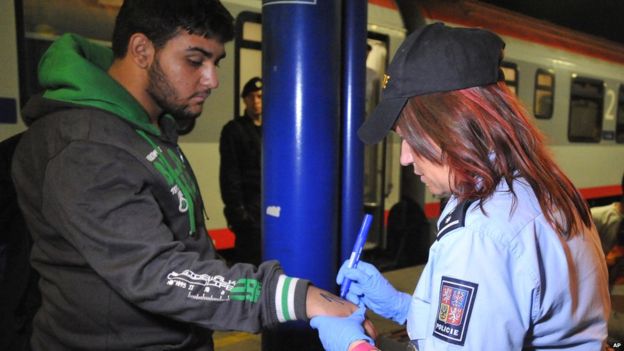 "These are awful images," said Hana Frankova, head of the legal department of a Czech NGO called Organisation for Aid to Refugees.

"It's absolutely against the provisions of the Refugees Convention, that asks signatories not to punish refugees who came without documentation," she told the BBC, adding that there was an established procedure for identifying asylum seekers.

Czech authorities say the migrants are now being housed in several police gymnasiums until it can be established whether they have already requested asylum.

If they have not, under the Dublin Regulation the Czechs are authorised to return them to the first EU country they were registered in. But in this case, that is often Hungary - which is itself already struggling to cope.

So instead they will likely be detained in prison-like facilities for up to six weeks, before being let go - probably to continue their journey to Germany.

Some observers, however, question why they are being detained here at all.

Almost certainly they do not want to apply for asylum in the Czech Republic, which has so far received just 884 asylum requests this year.

Instead they want to go to Germany, which - at least as far as the Syrians are concerned - will welcome them with open arms.

So why lock them up at the expense of the Czech taxpayer? They will be presented with a bill at the end of their six-week incarceration; few, of course, have the money to pay it.

"The Czech authorities are presenting them as criminals, and it resonates well with the public when they are detained," Hana Frankova told the BBC.

That is obviously not the official explanation. The authorities say they are detained because they arrived on Czech soil without documentation. 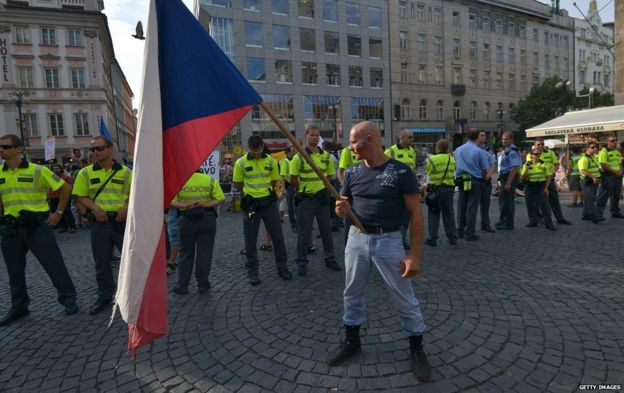 But the public mood is hardening; a petition is already circulating in Breclav in protest at a tent city being erected in the suburbs to house migrants arrested at the station.

And that hostility is echoed on a national level.

A new poll released on Wednesday suggested that 94% of Czechs believed the EU should return refugees to where they came from, 32% without helping them at all.

More than three quarters want to abandon the EU's Schengen Agreement, which enables passport-free travel, and send Czech border guards back to their posts.

Iceland said it could only accept 50 Syrian refugees. Then 10,000 big-hearted Icelanders offered up their homes. 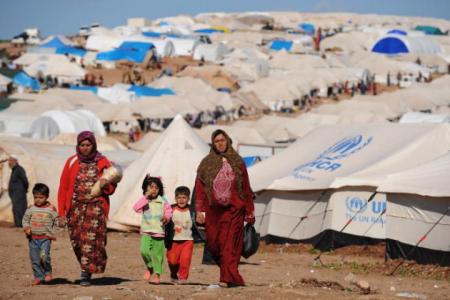 Europe is buckling under the weight of hundreds of thousands of African and Middle Eastern refugees trying to get into the EU. The Keleti train station in Budapest shut down Tuesday due to the number of migrants trying to get from Hungary to Germany; in late August, 71 refugees were found dead after suffocating in a refrigerated truck in Austria. Germany, meanwhile, is expecting 800,000 refugee arrivals this year.

In response to the crisis, the tiny island nation of Iceland has only offered the smallest amount of aid, agreeing to take in a mere 50 Syrian refugees. That wasn't nearly enough for popular Icelandic children's book author Bryndís Björgvinsdóttir. She launched a Facebook campaign that asked her fellow countrymen and women to open up their homes and urge the government to do more, The Telegraph reports. In 24 hours, more than 10,000 Icelanders had offered their homes for refugees to stay in. Keep in mind that Iceland's entire population is less than 330,000.

"I think people have had enough of seeing news stories from the Mediterranean and refugee camps of dying people and they want something done now," Björgvinsdóttir told Icelandic public television RUV in response to the overwhelming support.

That seems to be true. "I'm a single mother with a 6-year-old son...We can take a child in need. I'm a teacher and would teach the child to speak, read, and write Icelandic, and adjust to Icelandic society," one Facebook user wrote. "We have clothes, a bed, toys, and everything a child needs. I would of course pay for the airplane ticket."

The Icelandic government is now looking into how to accept more refugees. Whatever they decide, this much is for sure: The migrants they take in will have a warm welcome waiting for them.