John Lewis: How We Won, and Are Losing, the Right to Vote

John Lewis  is a congressman from Georgia. He was the chairman of the Student Nonviolent Coordinating Committee, was a leader of the Selma-to-Montgomery march for voting rights in 1965 and is the last surviving speaker from the historic March on Washington. This is his review of the new book, Give Us the Ballot, The Modern Struggle for Voting Rights in America By Ari Berman; Farrar Straus and Giroux. 372 pp. $28 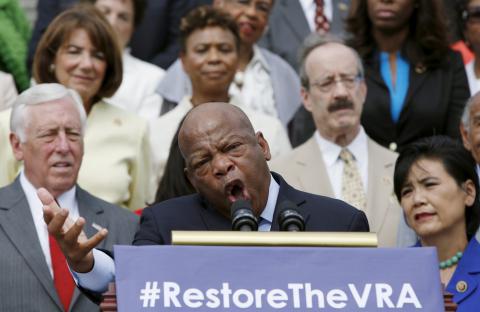 For most people, the 1963 March on Washington brings to mind the phrase “I have a dream.” Four simple words became the music that turned Martin Luther King Jr.’s speech into one of history’s greatest. But despite their elegance, they actually are not my favorite part of the speech. I love the beginning, where King defines the need for a civil rights movement in the first place.

“When the architects of our republic wrote the magnificent words of the Constitution and the Declaration of Independence, they were signing a promissory note to which every American was to fall heir,” King said. “. . . Instead of honoring this sacred obligation, America has given the Negro people a bad check, a check which has come back marked ‘insufficient funds.’

“But,” King added, “we refuse to believe . . . that there are insufficient funds in the great vaults of opportunity of this nation. And so we’ve come to cash this check, a check that will give us upon demand the riches of freedom and the security of justice.”

In this statement King speaks to the heart of black idealism and identifies the core of the American civil rights movement of the past 50 years. This vision of simple justice affirms that the rights and privileges of citizenship should not be reserved for some but should be available to all.

In many ways, this is the starting point of Ari Berman’s must-read book that documents the long, hard struggle for the equal right to vote in America. It begins with the crowning achievement of the civil rights movement, the passage of the Voting Rights Act of 1965. Berman clarifies beyond any doubt President Lyndon Johnson’s commitment to voting rights and skillfully describes the complex political landscape he faced in a Congress populated by legendary opponents of equality such as Sens. James Eastland of Mississippi, then chairman of the Judiciary Committee; Sam Ervin of North Carolina; and Strom Thurmond of South Carolina.

This book should become a primer for every American, but especially for congressional lawmakers and staffers, because it so capably describes the intricate interplay between grass-roots activism and the halls of Congress. Berman evenhandedly recounts how the success of the nonviolent Selma march empowered Johnson to act. But he also discusses the role that violence played in the history of the Voting Rights Act. The Ku Klux Klan murder of Viola Liuzzo, a Detroit housewife who assisted in the Selma march, paved the way for passage of the bill; but the Watts riots, which ignited just five days after the law was signed, fueled a cynical, destructive backlash against the legislation.

Berman, an investigative reporter for the Nation, teases out the roles of unsung heroes such as Attorney General Nicholas Katzenbach and John Doar, the assistant attorney general for civil rights, whose skillful management of Justice Department enforcement determined the new law’s pervasive impact for decades to come. Berman helps readers understand the tenuous implementation of a new federal law, when the interactions among federal employees, both presidential political appointees and career public servants, can make or break the work of Congress.

The title of the book evokes another King speech, not nearly as famous but just as important. Most people do not realize that the 1963 march was not the first occasion on which King spoke on the steps of the Lincoln Memorial. In 1957, three years after Brown v. Board of Education , he headlined the very first national civil rights rally held there. Its goal was to encourage the fulfillment of that Supreme Court decision, which rendered separate school systems unconstitutional.

I was 14 years old at the time of the Brown decision and a victim of educational inequality. I traveled to school on a run-down school bus that rattled and pitched over potholes and gravel along the dirt roads of rural Alabama. When it rained and the bus got stuck in the mud, the children had to get out and push the bus until it broke free. The sputtering tires flung grime all over our freshly washed clothes. When we left the dirt roads and rolled onto smooth, paved city streets, we passed big, beautiful school buildings adorned with stately columns and marble steps. I saw white children my age and wondered why I did not know them. The Brown decision excited me because I fully expected that one day I might bound onto the school bus to find the faces of some new white friends sitting in the seats. But soon enough it became clear that nothing would change. It is hard to describe the emptiness of that disappointment.

The 1957 march was organized to address this disenchantment, and, of course, King set the tone. “For all men of goodwill, [ Brown ] came as a . . . great beacon light of hope to millions of disinherited people throughout the world who had dared only to dream of freedom.” That has a familiar ring. But then he uttered nearly prophetic words when he said: “Unfortunately, this noble and sublime decision has not gone without opposition. . . . The legislative halls of the South ring loud with such words as ‘interposition’ and ‘nullification.’ ”

And in the Southern Baptist oratorical tradition, King added a powerful refrain: “Give us the ballot,” he called out, “and we will no longer have to worry the federal government about our basic rights. . . . Give us the ballot, and we will place judges on the benches of the South who will do justly and love mercy, and we will place at the head of the Southern states governors who . . . have felt not only the tang of the human, but the glow of the Divine.”

And thus emerges the name of Berman’s book. “Give Us the Ballot” offers the first discussion of both the transformation that ensued after the signing of the Voting Rights Act and, most important, the counter-revolution concentrated on stripping the act of its power. Berman, who interviewed me as part of his research, has given us not just a history of the law but its contemporary relevance. Despite decades of bipartisan support for the law in Congress and its reauthorization by four Republican presidents, Berman ably shows the systematic, persistent counterattacks of the Reagan and Bush Justice Departments in coordination with the Federalist Society, the White House and ultimately the Supreme Court to undo the advances of 1965.

Berman describes two strategies undertaken to denigrate and dilute the voting act. The first sought to undermine public confidence in applying any federal solution to fix a centuries-old injustice. It did so by likening states’ creation of districts with majorities of minority voters to a kind of congressional “quota system.” Opponents began to suggest that the advent of these districts assured that a fixed number of congressional seats would always be held by minorities. Policing fairness was a role the public was willing for government to play. But overseeing a system of favoritism through quotas was taboo.

Also, certain “hired guns” were placed inside the Justice Department, nurtured within academia and tasked with complicating the success of the act. As Berman tells it, Hans von Spakovsky, a George W. Bush appointee to the civil rights division of the Justice Department, was assigned specifically to impede the voting act’s enforcement. Harvard-educated Abigail Thernstrom, Berman writes, was encouraged to devote her research career to the creation of an academic framework for the neutralization of the law.

The second salvo, perhaps the more insidious, turned the act on its head. Begun in the Reagan years, this effort seemingly defended the law — but with the unspoken motive of destroying it. Justice Department officials under Reagan promoted the maximum use of gerrymandering by the states to string minority communities together, ostensibly in step with the tenets of the act. Oddly shaped, winding districts were formed to link communities of color, sometimes across many counties. This increased the numbers of black elected officials, but their origin was part of a long-term strategy to isolate minorities inside the Democratic Party and drive white voters into the Republican Party.

This book makes it plain that there has been a deliberate, systematic attempt to make it harder and more difficult for people of color to participate in the democratic process. Berman asserts that four of the Supreme Court justices involved in deciding Shelby v. Holder , the 2013 case that nullified the enforcement formula of the Voting Rights Act, were long-standing opponents of the act before they came to the court and were predisposed to gut it. The decision was rendered in spite of tens of thousands of pages of evidence that not only justified but virtually mandated repeated reauthorization of the law by Congress.

Berman believes we are living through a second Reconstruction. This time, the advances have lasted longer than the 10 short years of the first Reconstruction, but the methods of retrenchment are the same: criminalization that leads to the wholesale arrest of poor people and minorities, under-education, restricted access to capital and to the right to vote. Legalized segregation grew because Southerners feared that a true democracy might entail their losing property and advantage because of fair competition. It also introduced the possibility that white Southerners might one day be governed by those they had brutalized.

It is unbelievable to me that decades after Selma there are still hindrances — such as too few voting machines at some locations — that force people to wait hours to vote or to leave in frustration. I saw people waiting in unmoving lines at the polls in 2012 and 2014. Sure, there has been progress. No potential voter is trampled by horses or asked to count the bubbles in a bar of soap today, but circumstances still exist that discourage the political participation of every American.

Without voting rights protection in our country, frustration and bitterness will continue to build among the disenfranchised. If Congress does not act, choosing instead to leave these matters to the states, we will slip back to another period where pockets of injustice will become ingrained, mocking any claim of democracy.

Congress must fix the Voting Rights Act, and Berman’s book explains why, without passion or favoritism. It is the first history of the contemporary voting rights movement in the United States. It is long overdue, but Berman’s extensive reporting makes it well worth the wait.