His sense of purpose and vision for his life is unobscured and unencumbered. This is a man on a mission, the grandest and most noble of missions: to save a country and his countrymen from themselves, to insist that morality ought to dictate policy. 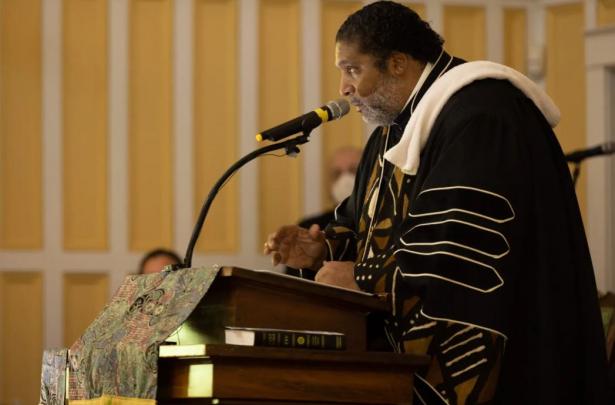 The Rev. William Barber II is a large man, but bent. He walks with a cane, with his helper nearby, placing each step with deliberation to make sure that his footing is sure.

For decades, Barber, who is 58, has suffered from ankylosing spondylitis, a painful form of arthritis that left him with a fused spine and conspired to cripple him, but he has objected.

On Sunday, I spent much of the day following Barber, and talking to him when I could, as he and others observed the 57th anniversary of Bloody Sunday in Selma, Ala., the day in 1965 that nonviolent voting rights protesters, including a 25-year-old John Lewis, were attacked in the city by state troopers wielding clubs and unleashing tear gas. Lewis’s skull was fractured.

I walked the bridge alone the night before the official commemoration. I had been on it once before, when I traveled to Selma with President Barack Obama in 2015 for the 50th anniversary. But traveling with the president can be chaotic. I wasn’t able to hear the faint babble of the river, or notice how the trees on one side leaned over the water as if they were bowing to take a drink or how the bluff rose vertically on the other side like the wall of a castle.

Most of all, I hadn’t been able to fully appreciate what had happened here: how a group of largely young Black people in a small Southern city — there were about 28,000 residents in 1960 — gathered the gumption to battle their Goliath and how they helped change the country. Barber is summoning the same energy. He is unassuming. His hair is wavy and slicked back like that of a man rising from a baptism, and his head is tilted down so that when he looks at you, he peers out from beneath the overhang of his brow.

But when he looks at you and talks to you, you know that he possesses something at his core that eludes most others: surety. His sense of purpose and vision for his life is unobscured and unencumbered. This is a man on a mission, the grandest and most noble of missions: to save a country and his countrymen from themselves, to insist that morality ought to dictate policy.

Barber, to me, is a modern-day Moses.

He not only follows in the footsteps of the Rev. Dr. Martin Luther King, he venerates him, often invoking him, and actively seeks to extend his work.

Both men are sons of preachers and sons of the South. Barber was born in Indianapolis, but his parents moved the family back to North Carolina to help integrate the schools there.

And both men believe deeply in direct action, policy pursuits and what Barber calls “fusion coalitions”: people, often poor people of various races and faiths, finding common ground in their fight against oppression.

Barber rose to national prominence concurrently with Black Lives Matter, but he was not directly connected to the movement. Most people came to know Barber as the leader of Moral Mondays, a series of weekly, racially diverse protests that began in North Carolina in 2013 after Republicans in that state pushed through restrictions on voting rights and unemployment benefits and other social programs.

In 2016, after three years of protests, a federal judge struck down North Carolina’s voter ID laws, saying that they sought to suppress the Black vote by targeting African Americans “with almost surgical precision.”

At the time, Barber called the decision a “moral and constitutional vindication of our constitutional critique of this extremist legislature and our extremist governor. A political majority doesn’t give you the power to run roughshod over the Constitution.”

He has since broadened his mission to include what he calls the “five interlocking injustices”: systemic racism, systemic poverty, ecological devastation, the war economy, and the distorted moral narrative of religious nationalism.

At the moment, he is pushing for the passage of federal voter protection legislation, as well as Build Back Better and an increased federal minimum wage.

Sunday morning, Barber spoke at Tabernacle Baptist Church, the site of the first mass meeting of the voting rights movement. It was held on May 14, 1963, after the death of a veteran civil rights activist in Selma, Samuel William Boynton.

The authorities had been trying to intimidate them out of meeting. They met anyway. According to the National Park Service, 300 people showed up, including Sheriff Jim Clark and “many recently deputized gun-carrying white males; many were only 18 years old.” As the Park Service described it, “They lined the walls of the church as mass meeting attendees sang, prayed and memorialized Mr. Boynton.” The title of the main speech that day: “The High Cost of Freedom.”

Barber’s speech, or should I say sermon, Sunday morning was “God Always Has Somebody,” and I believe that somebody is him.

Barber is a holy warrior at a time when secular activism is ascendant. In that way, he is a bit of an anachronism. He is aware of it, and clever in his negotiation of it. He talks more about morality than about theology. He positions himself above anything that might divide. His vision encompasses all — all religions, all races, all sexuality and gender expressions.

On Sunday, when he mounted the pulpit, he pointed out that the dais, which was surrounded mostly by older men, didn’t look right, and he invited women and young activists to be seated among them.

In his sermon, he paraphrased part of an address by Coretta Scott King delivered just months after she buried her assassinated husband:

King ended the passage by saying that “the problems of racism, poverty and war can all be summarized with one word: violence.”

This is essentially Barber’s mantra. And he believes that cross-racial, cross-religious, cross-generational coalitions are the only way to confront this violence. For him, the battle is bigger than racism or voting alone. For him, all forms of oppression overlap.

As he told me, “I’m not trying to lose the race critique but deepen it.”

[Charles M. Blow joined The Times in 1994 and became an Opinion columnist in 2008. He is also a television commentator and writes often about politics, social justice and vulnerable communities. @CharlesMBlow • Facebook]