This week’s military coup by Burkina Faso’s elite presidential guard on the eve of the scheduled Oct. 11 national elections has sparked widespread resistance and at least 10 deaths. General Gilbert Diendere, the former commander of the Regiment of Presidential Security, trained and funded by the U.S. and France, is the coup’s leader. He is also the former chief of staff to ex-President Blaise Compaore, ousted after 27 years of misrule by a 2014 popular uprising. 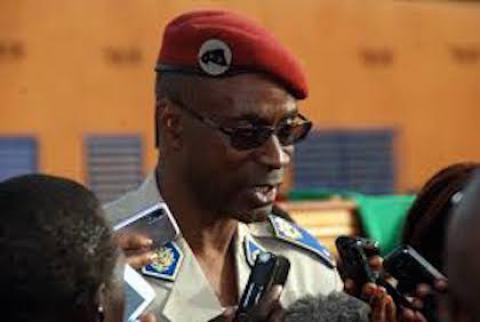 Gen. Gilbert Diendere, leader of this week’s coup d’etat in Burkina Faso, is the former chief of the U.S.-funded and trained elite Regiment of Presidential Security., ofaso.net

Presidential guard officers in Burkina Faso have seized power in a coup, with reports of more than 10 deaths amid protests in the capital, Ouagadougou. A close ally of former President Blaise Compaore has been named the country's new leader, state television reports.

The US, France and African Union (AU) condemned the coup in the former French colony.

Those killed were shot dead by presidential guard forces in the capital, a civil society group said. The claim by the influential Balai Citoyen group could not be independently verified. A medical source in the city's main hospital said three people had been killed. An unknown number of protesters have been detained.

'Rise up'
The coup leaders have imposed a night-time curfew across the West African state, and have ordered the closure of land and air borders, AFP news agency reports. The headquarters of Mr Compaore's Congress for Democracy and Progress (CDP) party were ransacked in Ouagadougou as news of the coup spread, it adds.

The AU and regional body Ecowas, the Economic Community of West African States, called for the immediate release of "hostages", referring to interim President Michel Kafando and Prime Minister Isaac Zida, who were detained at a cabinet meeting in the president palace on Wednesday. Their transitional authority was due to hand power to a new government after elections on 11 October.

Mr Compaore was ousted in a popular uprising, partly organised by Balai Citoyen, in 2014 after 27 years in power, and is currently in exile. He was accused of committing widespread abuses, and trying to change the constitution to extend his term in office. Some of his key allies had been barred from contesting the election.

A statement issued by the coup leaders said the West African state would be led by Gen Gilbert Diendere, Mr Compaore's former chief-of-staff. In media interviews, he said he had no contact with Mr Compaore and would do everything to "avoid violence that could plunge the country into chaos".

An earlier announcement on state television said wide-ranging talks would be held to form a new interim government that would organise "peaceful and inclusive elections".

Transitional parliamentary speaker Cheriff Sy called for people to "immediately rise up" against the coup, and declared himself the leader of the West African state.
"We are in a resistance situation against adversity," Mr Sy added.

The US said it was deeply concerned about events in Burkina Faso, and it condemned the seizure of power through unconstitutional means. French President Francois Hollande said he strongly condemned the coup "because an electoral process was under way". However, France would not intervene militarily, he said. Burkina Faso is a key ally of the US and France in the campaign against militant Islamists in the region.

The elite presidential guard has been trained, in part, by the US. It is the most powerful armed group in Burkina Faso and often disrupted the activities of the transitional government as it tried to cling to the privileges it enjoyed under Mr Compaore's rule. It is seen to be close to him, and is not popular on the streets. So its seizure of power could be a recipe for serious violence.

The transitional government might have made two mistakes - preventing politicians loyal to Mr Compaore from running in next month's elections and allowing the Reconciliation Commission, formed to heal wounds after the end of his authoritarian rule, to release a report calling for the presidential guard to be disbanded.

Some argue that a newly elected president would have had greater legitimacy to take such action.