That Stinky Cheese Is a Result of Evolutionary Overdrive

By comparing the genomes of different species of molds scientists have reconstructed their history. On Thursday, the scientists reported that cheese makers unwittingly have thrown their molds into evolutionary overdrive.They haven’t simply gained new genetic mutations to help them grow better in cheese. Over the past few centuries, these molds also have picked up large chunks of DNA from other species in order to thrive in their new culinary habitat. 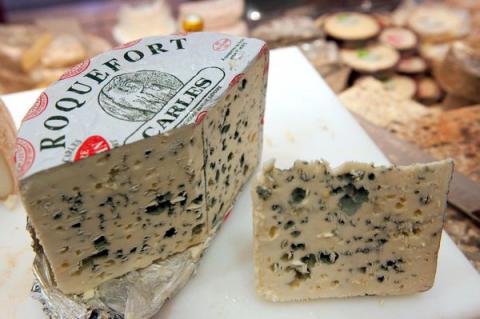 Biologists have reconstructed the genetic histories of molds used to make cheeses, like this Roquefort blue.,Philippe Wojazer / Reuters

“Every time we’re traveling internationally for a conference or something, we go specifically to the local cheese shop and say, ‘Give me the wildest blue cheese you have,’ ” said Dr. Rodríguez de la Vega, an evolutionary biologist at the French National Centre for Scientific Research in Paris.

The cheese they buy is alive with fungi; indeed, many cheeses require a particular species of mold to properly ripen. To produce Roquefort blue cheese, for example, cheese makers mix Penicillium roqueforti into fermenting curds. The mold spreads throughout the cheese, giving it not only a distinctive blue color but also its (acquired) taste.

To produce soft cheeses such as Camembert or Brie, on the other hand, cheese makers spray a different mold species, Penicillium camemberti, on the curds. The fungus spreads its tendrils over the developing cheese, eventually forming the rind. When you chew on a Camembert rind, you’re eating a solid mat of mold. 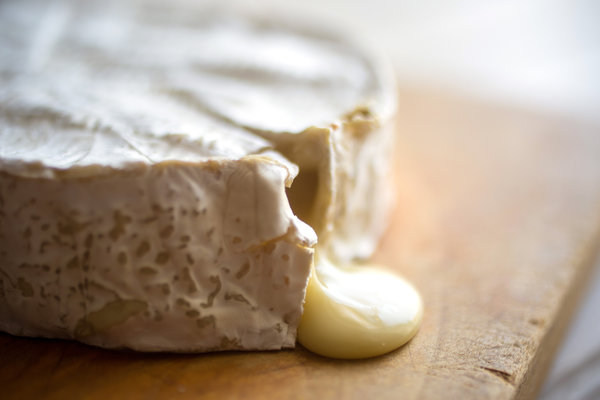 Some mold attacks milk and spoils it. Other mold helps make cheese, like Camembert, because it protects the cheese from contamination.
Andrew Scrivani for The New York Times

In addition to influencing the taste, mold keeps cheese from spoiling by defending it from contaminating strains of fungi or bacteria.

By comparing the genomes of different species of molds, Dr. Rodríguez de la Vega and his colleagues have reconstructed their history. On Thursday in the journal Current Biology, the scientists reported that cheese makers unwittingly have thrown their molds into evolutionary overdrive.

They haven’t simply gained new genetic mutations to help them grow better in cheese. Over the past few centuries, these molds also have picked up large chunks of DNA from other species in order to thrive in their new culinary habitat.

“It’s such a short time scale in evolution that it’s quite amazing,” said Antoine Branca, an evolutionary biologist at University of Paris-Sud and a co-author of the new study. 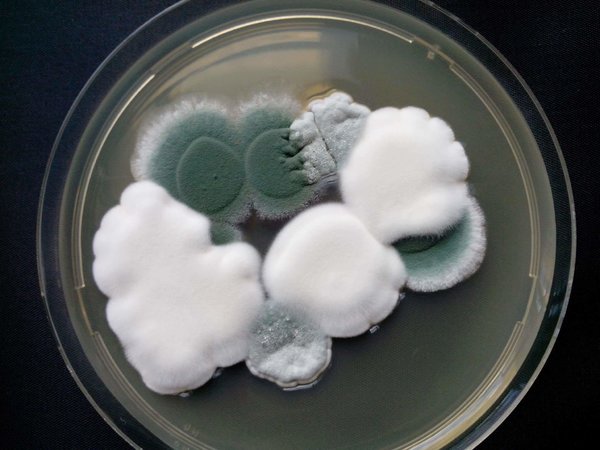 A mixture of different cheese-making fungi. The scientists were surprised by the speed at which mold had evolved to feast on cheese.
Jeanne Ropars

The first cheese was made thousands of years ago. Cheese makers developed new varieties often by discovering new molds. In France the traditional method for making Roquefort cheese, for example, starts with bringing loaves of bread into caves.

Penicillium roqueforti grows on cave walls, and before long it attacks the bread. The cheese makers retrieve the loaves and break off bits to transfer the mold to their curds.

The first cheese makers had no idea that they were collecting particular species of mold. It wasn’t until the early 1900s that scientists discovered the identities. Only then did it become possible for industrial cheese makers to select certain strains of mold grown in laboratories in order to produce cheese in factories.

Dr. Rodríguez de la Vega and his colleagues were curious to see how mold species changed once people began using them to make cheese. After all, wild species of Penicillium mold typically feed on decaying plant matter, not milk.

So the scientists sequenced the genomes of 10 species of Penicillium. Six of the species grow on milk — either because they are used to make cheese, or because they can contaminate cheese and spoil it. The other four are never found in cheese, including Penicillium rubens, the mold in which Alexander Fleming discovered the antibiotic penicillin in 1928.

The scientists then reconstructed the evolutionary tree of these molds. At the base was the common ancestor of all 10 species: a wild mold that lived millions of years ago. As its descendants diverged, their genes gradually changed and they adapted to new ways of living.

The scientists could still recognize similarities in these genes, but they also came across large chunks of DNA that looked out of place. These pieces of DNA weren’t present in the closest relatives of each mold species, but they were found in identical form in distantly related species.

This kind of swapping is known as horizontal gene transfer. Sometimes an organism will take up a piece of DNA from another species and incorporate it into its own genome. Scientists discovered horizontal gene transfer in bacteria 60 years ago and soon realized that it poses a serious threat to public health. After bacteria evolve resistance to antibiotics, for instance, those protective genes can be acquired by other species. They become resistant, too.

For years, scientists found little evidence of horizontal gene transfer among eukaryotes — species such as animals, plants and fungi. But now that scientists are taking a closer look at more genomes, horizontal gene transfer is turning out to be more common than previously thought. Last year, for example, researchers found evidence that ferns acquired light-sensing genes 100 million years ago from another plant species called hornworts.

Cheese molds, too, are enthusiastic adopters of foreign DNA, Dr. Rodríguez de la Vega and his colleagues found. Up to 5 percent of the entire genome of each mold they studied was made up of DNA from another species.

This DNA has been jumping between species within the past few centuries, the French scientists report — probably as a direct result of cheese making. The fact that chunks of adopted DNA are identical in different species suggests they were shared recently, in evolutionary terms, and haven’t had enough time to pick up new mutations.

Neither Wallaby nor CheesyTer were present in wild species of mold, and when the scientists compared strains of Penicillium roqueforti, they found the genes only in those used to make cheese, not in wild strains. Wallaby and CheesyTer help molds grow faster on cheese, it turned out: CheesyTer, for example, holds a gene that appears to allow molds to break down lactose, a form of sugar found in milk. But the gene also slows the molds’ growth on a diet of simple sugar.

“We are selecting for things that are not good in the wild, but are good for us,” said Dr. Rodríguez de la Vega.

The scientists suspect that these chunks of DNA carry other genes beneficial to molds forced to adapt to life on a cheese curd. Tatiana Giraud, a co-author of the study at the French National Centre for Scientific Research, said that understanding this evolution could give cheese makers new ideas about how to produce new flavors.

But Dr. Giraud also thinks scientists who want to genetically modify molds to make better cheese should take the lessons of evolution seriously. Other molds that contaminate cheese might pick up modified genes that help them thrive, becoming even more of a pest to cheese makers.

“You have to be cautious that it might spread to spoilers,” she said.

An article on Tuesday about the evolution of molds used for cheese making referred imprecisely to the isolation of the antibiotic penicillin. While Alexander Fleming discovered penicillin in 1928, he did not isolate the active substance.