Protests have erupted across many of South Africa’s public universities this year, with anger focusing on the deep-rooted economic and racial cleavages remaining a generation after the end of apartheid. 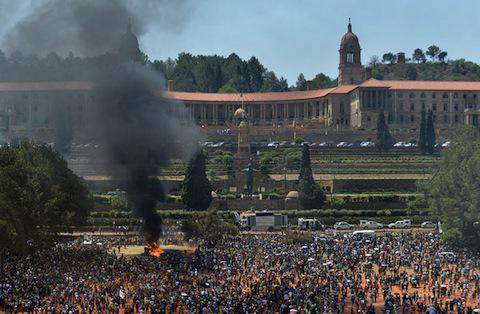 Thousands of university students protested at the Union Buildings in Pretoria, South Africa, on Friday, with some setting fires.,AP

JOHANNESBURG — President Jacob G. Zuma agreed on Friday to freeze tuition fees at South Africa’s public universities, yielding to widening protests by students who streamed into the capital, Pretoria, by the thousands and protested outside his office.

In a short televised statement, Mr. Zuma said he had made the decision after meeting with student leaders and top university administrators, but did not elaborate on his thinking. “Government understands the difficulty faced by students from poor households and urges all affected to allow the process to unfold to find long-term solutions in order to ensure access to education by all students,” he said.

In the largest protest organized by university students this year, thousands from campuses across the country rallied Friday at the Union Buildings, the seat of power in South Africa, chanting and holding signs demanding a freeze on tuition and criticizing Mr. Zuma’s administration.

Most students protested peacefully. But some started fires and tore parts of a fence around the Union Buildings, hurling rocks at riot police officers and demanding that Mr. Zuma address them directly. The police responded by firing stun grenades and using a water cannon to disperse the crowds, and unfurled barbed wire to prevent protesters from moving inside.

Students celebrated outside the Union Buildings as they learned about the tuition freeze.

“I’m so excited,” said Nonsikelelo Nako, 24, a student from the University of South Africa who participated in the march. “We’ve been crying for this. Our struggle at the end of the day became a new freedom for us.”

Protests have erupted across many of South Africa’s public universities this year, with anger focusing on the deep-rooted economic and racial cleavages remaining a generation after the end of apartheid.

But in recent days, the protests have spread outside the campuses, as students have leveled their ire directly at the government. Students and police officers clashed outside the Parliament building in Cape Town, and students marched on Wednesday to the headquarters here of the African National Congress, the liberation movement that has governed the country since the end of apartheid in 1994.

Ramabina Mahapa, 23, president of the University of Cape Town’s student government, said he and others had initially taken their demands about freezing fees to university administrators.

“We wanted them to put pressure on government,” said Mr. Mahapa before he was scheduled to join a student delegation to meet Mr. Zuma. “Then we quickly realized that their hands were tied and that in fact they were to a certain extent sympathetic towards us. Then our efforts changed and were now directed towards government.”

Clashes between the police and some students continued even after Mr. Zuma made his announcement, suggesting lingering anger at the government. The protest in the last few days widened to include students who had not participated in previous demonstrations.

Thando Khumalo, 25, a communications major at the University of Johannesburg, said she first became involved on Wednesday. Ms. Khumalo said she grew angry last week as discussions over the tuition increases were going nowhere. Her parents, who work as teachers, have paid her fees but would struggle to put her younger brother through college, she said.

“People are struggling to pay for higher education in South Africa,” she added. “It’s become a commodity where only the elites are able to access something that’s able to move us from — let’s say if you come from the middle class — move you up higher so that you can do well for your family.”

Referring to the post-apartheid nation of opportunity and equality that the African National Congress had pledged to create, she said, “Why are we still struggling after we were promised so much in 1994?”

Though many South African blacks share deep dissatisfaction with the governing party, there have been few signs so far that the student protests are drawing wide, active support. Unions have expressed solidarity but have yet to offer assistance. Neither have the students received support yet from the vast majority of poor blacks who remain the A.N.C.’s backbone of support.

The A.N.C. and the country’s two main opposition parties have tried to jump onto the protest movement. But students firmly rejected the overtures.