It is time to push strategies that go beyond the minimum wage and penalize low-wage employers for the harm they do to workers and communities. 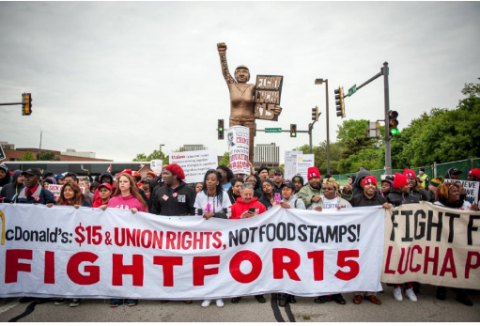 , Fight for $15
Minimum wage increases put hard cash in workers’ pockets. But while providing relief for struggling families, minimum wage increases on their own do not build worker power.
Even if it proves true that more take-home money frees workers up to become more active, minimum wage increases do not automatically build the sustained power that comes from strong worker organizations with members who vote and win binding contract agreements. Given the dire state of affairs for today’s working families, it is this kind of power we actually need. And our focus should be on strategies that build it. It is the possibility of pairing real relief with real power that generated a new wave of strategies to win back revenue that corporations have extracted from workers, and in the process of doing so generate new mechanisms for workers to organize and bargain with (or around) their employers.
How It Works
The “low-wage employer fee” is actually any strategy that attempts to win back the resources workers lose when large, low-wage corporations transfer their costs to the public while continuing to increase their own profits. In the strategy’s simplest form, it works in the following way. First, workers identify large, highprofit, low-wage employers based on the gap between their current wage levels and what worker and industry standards determine sustainable. These companies, able to pay a fair wage and afford necessary benefits such as health care, child care, and retirement choose not to in the interest of higher corporate profits and salaries for top executives. As a result, workers are dependent on services like food stamps and other public assistance programs to survive. To make matters worse, these employers commonly offer erratic work schedules that make securing second jobs difficult. And the wages they pay make the basic supplies of life—food, electricity, housing, and so on— nearly unaffordable. Second, worker organizations measure the companies’ cost to taxpayers and the community—including those related to the unmet basic needs of low-wage workers themselves—who are put in the position to essentially subsidize the wages and benefits that should be but are not provided by these companies. This cost creates the basis for setting the fee low-wage employers would then pay. Third, a fund is created specifically for the purposes of supporting the outlined needs of low-wage workers in the area. It is not allocated to a state’s general budget, but rather to a dedicated funding stream for the sole purpose of offsetting the local costs that poverty wages exact on workers and society. Last, and maybe most importantly, a committee or council of workers—including those who would benefit from the fee as well as those who might implement programs that would be funded by it—is created to oversee the fee. Thus, impacted workers have decision-making power over the revenue generated. Ideally, this grouping is democratically elected by and accountable to workers within related industries and has some level of decision-making authority similar to New York’s wage board. And through that authority, it can facilitate company appeals and support workers negotiating directly with their employers over similar practices and standards. But even the establishment of an advisory committee can increase workers’ voice in setting better standards in chronically low-wage sectors.
Once such a fee is implemented, low-wage employers can either negotiate directly with workers over wages and conditions of the industry or they can pay the low-wage employer fee that workers will appropriately allocate to subsidize the community’s assumed costs of low-wage work. How they pay the fee, and how often, would be set based on the local context—either in a lump sum or in intervals throughout the year. The hope is that it ultimately expands workers’ ability to collectively define industry standards—either directly with employers or around them via smartly crafted state interventions.
The Case for a Low-Wage Employer Fee
It is easy to imagine this fee impacting some of the most notoriously large, low-wage employers in the United States—from Home Depot, Yum! Brands, Bank of America, and Wells Fargo to TJMaxx, FedEx, Aramark, Darden, Walmart, and McDonalds. Walmart and McDonalds alone employ over two million workers in this country. Any state with a low-wage employer fee creates a stronger climate for workers to demand better pay directly or be subsidized by the company in other ways.
Corporations like these have spent years developing layers of infrastructure and management to place between them and their workers, allowing them to shirk responsibility for worker treatment and industry conditions. In the process, these same companies have deeply embedded their labor costs onto society, allowing them to further maximize profits for those at the top. According to a recent research brief titled “The High Public Cost of Low Wages,” researchers found that

stagnating wages and decreased benefits are a problem not only for low-wage workers who increasingly cannot make ends meet, but also for the federal government as well as the 50 state governments that finance the public assistance programs many of these workers and their families turn to. Nearly three-quarters (73 percent) of enrollees in America’s major public support programs are members of working families; the taxpayers bear a significant portion of the hidden costs of low-wage work in America.