Black Lives Matter activists are concerned about intra-racial violence. But they don’t see police and prisons as the solution. 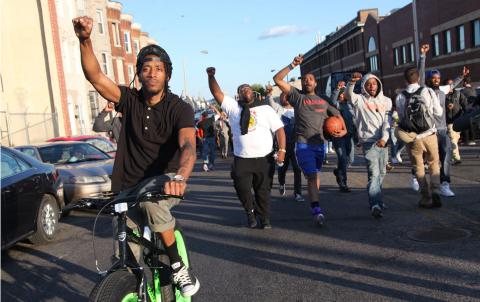 The “Ferguson Effect”—the claim, cited by some law enforcement officers, that the current spike in violent crime was sparked by the movement against police violence—is not real. But despite a lack of social science evidence to support this theory, FBI Director James Comey would have you believe that the Black Lives Matter movement is responsible for the increase in tragic violence.

In an address to the International Association of Chiefs of Police’s annual convention in Chicago, Comey described police and minority communities as two lines in parallel. “Each incident that involves real or perceived police misconduct drives one line this way. Each time an officer is attacked in the line of duty, it drives the other line this way. I actually feel the lines continuing to arc away from each other, incident by incident, video by video, more and more quickly,” he said. “Just as those lines are arcing away from each other–and maybe because they are arcing away–we have a crisis of violent crime in some of our most vulnerable communities across the country.”

Drawing a false equivalency between the amount of police-enacted violence and violence directed at police, Comey traces a growing divide between the community and the police force due to increased awareness of police violence. That divide, he contends, results in the police pulling back their crime-fighting resources from communities most affected by violence.

As activist and data scientist Samuel Sinyangwe points out, this position rests on a few different fallacies: first, that police are being less aggressive out of fear of being the next cop to have their tactics publicly scrutinized, and secondly, that aggressive policing leads to a reduction in violent crime. There is no evidence to support this, and if a nationwide decrease in police aggression is indeed underway, someone should tell the girl who was body-slammed and dragged by Officer Ben Fields at Spring Valley High School in Columbia, South Carolina, for her refusal to give her cellphone to a teacher. If aggressive policing, which includes the kind of violence recently caught on film, led to less crime, that would mean that the only thing law-enforcement agencies have come up with to reduce violence is the use of more violence, and the violation of people’s rights. In other words, the only way to prevent violent crime is martial law.

Instead, invoking the “Ferguson Effect” is an attempt to discredit the newly revived grassroots movement for racial justice. Governor Chris Christie, for instance, recently accused the movement of supporting “lawlessness” and “calling for the murder of police officers.” But this isn’t new. In some ways, it’s a twist on the way in which “black-on-black crime” has been used to deflect our attention from the ways in which police have been used to subjugate and dehumanize black communities. People who would rather not talk about that point to violence within those communities as the “real” issue. That further pathologizes blackness—as if there is something uniquely abhorrent about black people killing other black people. In fact, because America is highly segregated, it is more likely that a person of any race will commit violence against a person of the same race than a different one. More often than not, violent crimes are committed where a person lives and against someone the person knows. If there is “black-on-black crime,” there is also “white-on-white crime.” This is not unique to black people.

America is highly segregated, so most violence is intra-racial.

But sometimes, the concern about so-called “black-on-black crime” is genuine. Throughout the 1980s and 1990s, when the phrase became popularized, the community leaders and activists that made it their mission to end intra-racial violence in black communities were not (always) attempting to pathologize black people. They were, in most cases, horrified by the violence, and all the attendant trauma, their communities were experiencing, and were seeking to make their communities safer.

It’s in that spirit that I tried to receive John McWhorter’s recent Washington Post op-ed, “Black Lives Matter should also take on ‘black-on-black crime.’” McWhorter acknowledges police violence as a problem and supports the protests, but also believes, as he writes, that “Black Lives Matter should develop a second wing, devoted to rooting out the minority of criminals in black neighborhoods who kill with such abandon that in almost any big city in America, reading of such events over a weekend is so typical it barely makes news.”

What McWhorter misses is that this new generation does care about so-called “black-on-black crime,” though it refuses that misleading phrase. Many of the organizations currently lumped together under the banner of Black Lives Matter have as one of their platform goals an end to violence within the community—and not just gun violence among young black men, as “black-on-black crime” is often imagined, but also sexual violence, intimate-partner violence, and violence against trans and gender-nonconforming people. But, they do not, as McWhorter and others have, see the police, prisons, and the carceral state as part of the solution.

For McWhorter, the goal is to “forg[e] more trust between black communities and police.” Incident after incident of unjustified violence from police officers toward black men and women shows us that trust is not possible, nor desired. Instead, the goal is to eliminate the constant police presence altogether. To that end, this new movement understands the problem of intra-community violence as one born of systemic inequality and institutional racism. The response, then, cannot be to root out the “minority of criminals in black neighborhoods” but to understand the conditions in which the violence thrives—“joblessness, economic redlining and lack of access to municipal services other locales take for granted,” as McWhorter describes them—and call for the necessary investments for prevention. To identify a class of people as “criminals” and not address the underlying causes of “criminal” behavior is reductive, not transformative. It only serves to suggest there is a group of people who are disposable, who are not also victims of the same system of injustice.

This is what Black Youth Project 100, and several other organizations, were telling us when they were arrested for protesting Chicago Mayor Rahm Emanuel’s plan to hire 300 more police officers and give $200 million to the police department. At the same convention where Comey delivered his remarks on the “Ferguson effect,” the organizers “bound [themselves] together by lock boxes while they shut down three intersections surrounding the IACP’s conference location at McCormick Place…and one organizer took down the American flag and replaced it with a flag titled, ‘Unapologetically Black,’” BYP100’s Facebook page describes, while wearing hoodies that said “Fund Black Futures.” “BYP100, allied-organizations, and community supporters conducted…direct actions at the IACP conference to demonstrate an urgency to divest from police departments and organizations and reallocate funds to programs and policies that keep Black communities safe,” the Facebook post continued. The fight to end police violence is not separate from that to end intra-racial violence, because they are direct results of the same system, and must be addressed through the same measures.

To identify a class of people as “criminals” and not address the underlying causes of “criminal” behavior is reductive, not transformative.

But for those not satisfied with that sort of long-term investment in reducing violence, there are groups like S.O.S. Crown Heights in New York City that do anti–gun violence work, through a number of different community-outreach programs, including violence intervention and teaching conflict mediation. They also help put communities in touch with mental-health services and assist in the search for jobs. And this is done without arrests, without prisons, without police, without the carceral state.

The national focus at the moment may be that of police violence, but that does not mean this movement is ignoring every other form of violence facing black communities. On the contrary, it is expanding its focus to put an end to all forms of oppressive violence and to build a better future for all black lives.