Who Was Rosa Luxemburg?

Rosa Luxemburg was at the center of revolutionary politics from 1898-1919, a very complex political time. Connecting her perspectives to the many now obscure movements of the pre-WWI era can get confusing for those who have not much studied the period. That’s why the graphic novel format used by Evans is so vital to understanding Luxemburg’s role. 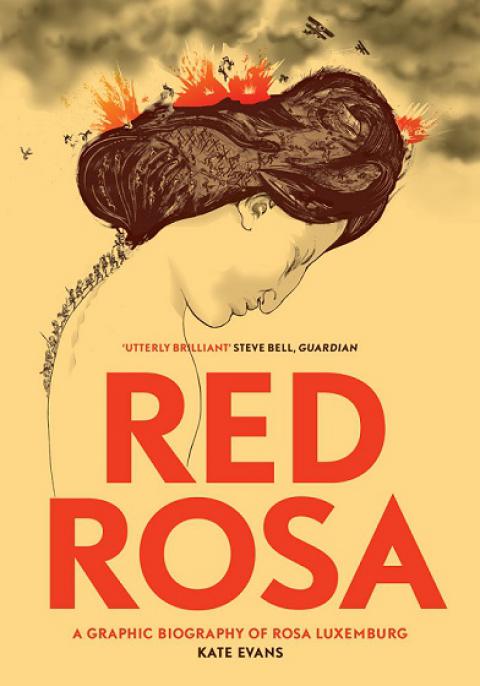 Nearly a century after her death, Rosa Luxemburg remains a legendary figure on the political left. Luxemburg sought to “affect people like a clap of thunder” in a  political landscape where revolution competed with reform. An obvious question when approaching a new book on Luxemburg is whether her activism and writing  still speak to us today.  After reading Kate Evans’ new graphic novel, Red Rosa, the answer is clearly yes.

Rosa Luxemburg was truly a remarkable woman. Born in Poland in 1871, Luxenburg aspired to live the life of a feminist in an era when women were still the legal property of their fathers and husbands. Luxemburg’s radical politics extended to how she lived her personal life, and her feminist legacy is as path breaking as her political one.

Luxemburg came of age when Karl Marx’s Communist Manifesto was being actively debated on the political left. She became a revolutionary Socialist while still in her teens and moved to Berlin in 1898 to connect with the world’s fastest growing Socialist movement. There were ninety different Socialist newspapers in Germany at the time, and over 1.8 million men had voted for the Social Democratic Party (SPD) in the most recent election ((women still lacked the vote, which Luxemburg worked hard to change).

Luxemburg quickly got engaged in the complicated machinations of the SPD. It is a story that seems distant from our current time but there is one key constant: massive economic inequality. Luxemburg argued that “the distinctive feature of capitalism is the precariousness of the worker.” Her terminology sometimes differs, but her economic critique parallels that of the Occupy Movement as well as that of the progressive wing of the current Democratic Party.

Luxemburg gained influence in an all-male political world for two reasons: she was brilliant and she was persistent. The rare female of her time to secure a doctorate in economics, Luxemburg treated the writings of Marx like Jewish scholars did the Talmud: not as exact truth but as writings to analyze and debate. As Evans puts it, she was “an inspirational teacher because she never stops learning.”

Rosa Luxemburg was at the center of revolutionary politics from 1898-1919, a very complex political time. Connecting her perspectives to the many now obscure movements of the pre-WWI era can get confusing for those who have not much studied the period. That’s why the graphic novel format used by Evans is so vital to understanding Luxemburg’s role. Paul Buhle, who edited the book, performed a similar role in making the world of Yiddish accessible in the graphic novel, Yiddishkeit. I wrote about that book in 2011 that Buhle “has a remarkable talent for synthesizing material and understanding what interests readers.”

Evans does the same in Red Rosa. If you have ever wanted to learn about Rosa Luxemburg, this book is the perfect entry point.

Unfortunately, Rosa Luxemburg could not overcome two historical moments that connected after her death to cause the worst acts of inhumanity of the modern world.

The first was World War I.

Because Luxemburg saw capitalism as dependent on imperialism and ongoing war, she did everything in her power to frame struggles in capitalist v. worker terms rather than along nationalistic lines. In 1907, she helped draft a resolution of the German Socialist Party that said it was the “duty” of the working classes to “do everything to prevent the outbreak of war.” Yet in 1913, when Socialists were the largest Party in the German government, Luxemburg was arrested for giving an anti-war speech. She was given a one year prison term and in 1914 the first World War ensued.

Despite nationalism’s prevailing over worker unity in support for the war, at war’s end Luxemburg continued to battle for a truly Socialist Germany. This led to a series of political betrayals by the Socialist government, who offered a $100,000 mark bounty for Luxemburg’s capture. This led to Luxemburg’s arrest and murder by the authorities in 1919.  Luxemburg courageously challenged the Socialist Party’s moral and political hypocrisy, and their treatment of her foreshadowed other Party failings that would give rise to the Nazi Party and Adolph Hitler’s leadership of Germany.

She died at 47. A brilliant life cut short, but not before her legacy as one of the great revolutionary theorists and organizers of the 20th century was cemented.

Kate Evans has made the stirring story of Rosa Luxemburg’s legacy accessible to a new generation of readers. No matter how powerful the adversaries or steep the challenge, Luxemburg’s passion for social and economic justice remained.

[Randy Shaw is the Editor of Beyond Chron and the Director of San Francisco’s Tenderloin Housing Clinic, which publishes Beyond Chron. Shaw is the author of four books on activism, including The Activist's Handbook: Winning Social Change in the 21st Century, and Beyond the Fields: Cesar Chavez, the UFW and the Struggle for Justice in the 21st Century. His new book is The Tenderloin: Sex, Crime and Resistance in the Heart of San Francisco.

Randy Shaw will be speaking about his new book, The Tenderloin: Sex, Crime and Resistance in the Heart of San Francisco, on a panel with Gordon Chin and David Talbot at the Howard Zinn Book Fair on November 15.]