The conversion-narrative approach that Suffragette is rooted in precludes a structure as savvy as what we saw in Ava DuVernay's exquisite Selma, a film of negotiation and confrontation — and one that presumed this was no viewer's first day in this world. Suffragette expends its energy selling us on what we already believe rather than examining the way these activists pressed the world into believing it 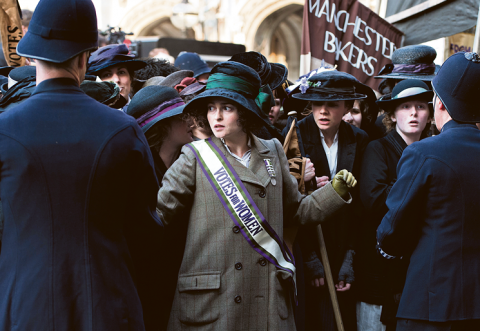 Political drama has long been shaped by what we can call the conversion narrative. In a play like One Third of a Nation, one of the Living Newspaper extravaganzas mounted with New Deal funding by the Federal Theatre Project, an everyman Joe you just gotta root for tries to live life honestly, outside of politics, only to find such living impossible: The system is rigged! Our Joe, a fellow audiences are pressed to feel is quite like them, gets ground down by institutional unfairness, often treated no better than those minority classes the target audience might not want to identify with. But then, at long last, facing no other recourse, the everyJoe fights back, reborn as a radical.

That formula — the little guy who finally pushes back, bringing an audience of little guys along — is as enduring as the image of Steinbeck's Okies squatting down on their hams and wondering at how the country's gone mean. Lately we're seeing it in big, splashy movies about civil rights battles of the recent and historical past. The godawful Stonewall's studiously un-flamboyant hunk was an apolitical naïf crafted not to alienate straight-dude audiences; Freeheld's lead lesbians faced death and certain financial ruin before asking, very politely, for what was owed to them. The hearts of their adversaries only soften when a bunch of straight cops finally consent to mumble yeah, these gays are people too.

Most curious of all is Sarah Gavron's Suffragette, about a civil rights battle that precedes One Third of a Nation by a generation. Perhaps you could make a case for why those dramas about gay Americans besting injustice might strain to reach out to audiences who aren't yet quite onboard — but why does Suffragette have to devote so much of its running time to convincing us and its lead that yes, truly, women should have the right to vote?

Carey Mulligan plays our Joe, in this case a Maud. Like Tom Joad before her, she just wants to live and to work, in this case in Britain at the dawn of the twentieth century. She's a laundress, toiling away, scalded by steam, raising a son with a husband you know from his first scene doesn't think of her as a person. One evening, delivering a parcel for her boss, Maud sees a suffragette chuck a rock through a shop window and scream demands about extending the vote to women. This plays out with prickling unease: Gavron appreciates audiences' distaste for destruction, even in the name of this justest of causes.

It's inevitable, in the scenes that follow, that we will witness Maud's radicalization, and getting there is a predictable slog, despite Mulligan's skillful depiction of a woman discovering herself while bearing up through an ordeal. Maud's a fiction, so the specifics of her suffering are purely illustrative, stops on a tour, arranged for our benefit, of how the world used to punish women. Some of this slips into melodrama of the cheap sort: Her husband boots her out after she's arrested for participating in a public demonstration, and later she happens to pop in for a hopeful visit at precisely the moment he is turning their son over to new adoptive parents.

Certainly tragedies like that were not uncommon. But Abi Morgan's script emphasizes them at the expense of depicting the historical moment itself. Is it asking too much that a drama about the triumph of the suffrage movement trust us to get from the start that this was a cause worth fighting for? Or that when the nonfictional Emily Wilding Davison (Natalie Press) makes a profound sacrifice at the film's climax, perhaps she should be someone we feel we've met?

The film has inspired the now-familiar complaint of "whitewashing," of casting historical movements as exclusively white, while its defenders have argued that Suffragette — note that the title is singular — is one woman's story, not a summation of a movement. That defense fails to note why the movie is "one woman's story": Because the filmmakers presume it's easier to sell tickets to see a white woman suffering than a movement building bombs.

That limited perspective is not only a problem of representation. It also robs the movie of dramatic revelation. The final third is a jumble of arrests, hunger strikes, truncated speeches, and attempts at something akin to domestic terrorism. Gavron shoots and stages these with raw, street-level suspense, but they play as incidentally engaging rather than vital parts of a greater whole. Since so much movie has been devoted to Maud's awakening, there's too little time for the things we're awakened to: the organized suffragettes themselves, whose strategies and divisions and supportive structures get teased only in too-quick glances.

Meryl Streep, all over the advertising for this film, has two scenes as the world-changing activist Emmeline Pankhurst, but in them Pankhurst is delivering public pronouncements: She's at a remove, even as she calls for public destruction. Helena Bonham Carter impresses more in the role of a pharmacist who has taken, with her devoted and progressive husband, to bombmaking. Gavron mounts crisp, provocative set pieces of activists blowing up an empty home and dropping explosives into mailboxes, but Suffragette skims over the fascinating questions of how such tactics were arrived at, of what other approaches were rejected, of just how far these women were willing to go.

The conversion-narrative approach precludes a structure as savvy as what we saw in Ava DuVernay's exquisite Selma, a film of negotiation and confrontation — and one that presumed this was no viewer's first day in this world. Suffragette expends its energy selling us on what we already believe rather than examining the way these activists pressed the world into believing it

[Alan Scherstuhl is film editor at The Village Voice. He also covers books, music, and other matters for the Voice.]