Prior to the Boston Globe’s investigation, the sexual abuse of minors by priests was one of the Catholic Church’s worst-kept secrets. Spotlight's telling of the Church’s sex abuses reminds viewers how good, honest journalism has the power to transform a community. 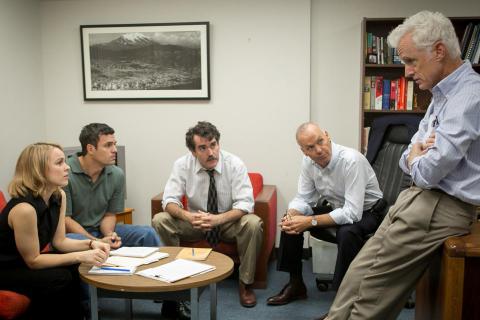 For nearly two decades, CBS Evening News anchorman Walter Cronkite signed off his broadcasts with five simple words: “That’s the way it is.” The statement expressed what he believed should be journalists’ guiding principle, which is to report the facts “without regard for the consequences or controversy that may ensue.”

Much has changed since the iconic newsman gave up his desk, but often, the truth still shines through and shows its enduring power to effect change. That’s the message of Spotlight, the new film starring Mark Ruffalo, Michael Keaton, and Rachel McAdams about the team of Boston Globe reporters who broke the Catholic Church’s sex-abuse scandal through a series of stories beginning in January 2002.

Prior to the Globe’s investigation, the sexual abuse of minors by priests was one of the Church’s worst-kept secrets. Cases had been widely reported in newspapers from Louisiana to Massachusetts since at least the 1980s. But these stories ran prior to the advent of the Internet, which limited their impact beyond the communities in which they took place.

Additionally, the Boston Globe team documented that Church leaders knew what was happening, failed to act appropriately, and in some cases deliberately covered up abuse. Rather than removing abusive priests, the church would place them in ineffective treatment programs or put them on “sick leave” before shuffling them around to other parishes where they would again harm children. The Globe even published letters from mothers of abused kids pleading for justice that were never sufficiently addressed.

One might assume that any reporter with enough sense to come inside during a thunderstorm would relish the opportunity to break such a story. But that ignores how powerful a religious institution like the Catholic Church is—especially in a city like Boston.

By the turn of this century, the Globe had both a tense and tangled relationship with the Catholic Church. It was once customary for an incoming Globe editor to meet with the Archbishop of Boston—and the film shows Cardinal Bernard Law welcoming Marty Baron into his residence. Law and other higher-ups had openly criticized the newspaper for criticizing the Church. After the Globe published stories about a sex-abuse case in 1992, for example, Law responded by saying, “we call down God’s power on the media, particularly the Globe.”

The matter was made more fraught due to the Globe’s subscriber base—53 percent Catholic in 2001. By publishing these stories, the paper risked alienating their readers in a time when newspaper subscribers were increasingly hard to come by. As a result, the film depicts a newspaper that had been, to some extent, more concerned about zoning issues and Red Sox games than digging up dirt on the Catholic Church by the time the investigation began.

While the film focuses on the Globe’s five-person Spotlight team that worked on the story initially, a total of eight journalists contributed to the coverage that won the paper the 2003 Pulitzer Prize for public service. Michael Paulson, now with The New York Times, was the sole religion reporter on that team and was tasked with covering the impact of the scandal on Catholicism itself. He notes that they were aware of both the risks and responsibilities involved.

“These stories required a big commitment of time and resources and antagonizing an institution to which our readers felt a significant amount of loyalty,” Paulson says. “But I think all of us had a sense that these stories mattered more than much of what we ordinarily do as journalists because they involved children’s safety.”

So Spotlight takes audiences into a moment that everyone—not just journalists—can relate to: a time in which telling the truth about a matter is both necessary and perilous. In this tension, the film explores the nature of truth itself. By portraying the backstory of victims’ failed attempts for justice, it reminds viewers that truth-telling is often a slow slog. By exploring the complexities of Catholic Church, it reminds them that speaking truth to power is not like speaking it into a vacuum. By showing the flawed personal lives of the team of journalists, it reminds them that truth tellers need not be perfect—only willing. And by telling of the stories’ impact, it reminds them that telling the truth has the power to make a positive difference.

“All of us had a sense that these stories mattered more than much of what we ordinarily do as journalists.”
The Globe ran dozens of stories beginning in 2002 despite the risks, and the coverage eventually forced the Catholic Church to respond. Pope John Paul II summoned the cardinals to the Vatican in order to examine the issue, the bishops convened to formulate new rules for handling abuse charges, and Cardinal Law was among a number of officials who were forced to resign.

“The whole conversation about child safety in religious institutions has changed as a result of the attention that came to this issue,” Paulson says. “There has even been a corollary effect in religious traditions outside of Catholicism as everyone was forced to reckon with their practices.”

The net effect of the Globe’s stories was that government officials, law enforcement, parents, and religious leaders began taking allegations of abuse more seriously. As a result, other religious communities—Mormons, evangelicals, and Orthodox Jews among them—have undertaken efforts to make their own worship spaces safer for minors. But the conversation is only just beginning; more remains to be done.

After meeting with sexual abuse victims in Philadelphia this past September, Pope Francis said, “God weeps” at the suffering pedophile priests had caused. He added, “People who had the responsibility to care for these tender ones violated that trust and caused them great pain … these can not be maintained in secret and I commit to a careful oversight to make sure that youth are protected and that all responsible will be held accountable.”

Months earlier, the Pope approved a tribunal to hear cases of bishops accused of covering up sexual abuse by priests.

[Jonathan Merritt is a contributing writer for The Atlantic and a senior columnist for Religion News Service.]