Past Moore movies have proven that huge audiences can be found for political documentaries. Oscar-winning Bowling for Columbine was the highest-grossing documentary until Fahrenheit 9/11 snagged that record, and Sicko is in the top 10 for the genre. But all those films aimed their fire squarely at the United States, while Where to Invade Next aims a meandering Hi-Liter at a smattering of countries. And we all know that outrage is an easier sell than optimism. 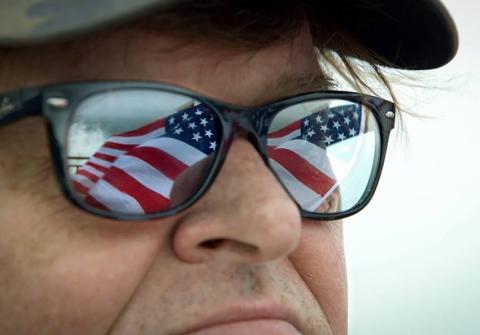 Michael has stars--and stripes--in his eyes as he travels Europe.,

On a lazy August night in 1994, two kids flipping through channels stumble on a strange new show called TV Nation. The end segment pits the United States, Canada and Cuba against each other in a “healthcare Olympics,” with breathless play-by-plays of patient treatment.

Canada wins, although it will later be revealed that NBC rejected the segment’s original winner, Cuba. This was my introduction to political satire at age 12. It was also my introduction to Michael Moore. If you’re able to get your hands on TV Nation (which, tragically, has never been released on DVD and isn’t streamable), you can see brilliant, bite-sized treatments of themes he would explore in-depth in documentaries like 2002’s Bowling for Columbine (America’s messed-up gun culture), 2007’s Sicko (America’s messed-up healthcare system), and 2009’s Capitalism: A Love Story (America’s messed-up political economy). All in all, it was one of the most subversive programs ever to air on U.S. network television—and by far the most entertaining entry in the “news magazine” show genre (which includes 20/20 and Dateline).

By contrast, Moore’s latest film, Where to Invade Next, is a plodding and disjointed movie that manages to be mostly unentertaining and at times painfully unfunny. How Moore could unleash this on the world just a few years after a Toronto Film Festival keynote speech in which he scolded documentary filmmakers for their fear of being entertaining is hard to fathom.

Apparently exhausted by Capitalism’s full-throated condemnation of this country’s way of doing business, Moore decided to head across the pond to learn what other countries are doing right. Where to Invade Next’s cheeky premise is clever for a few minutes: The Pentagon, unable to win a war, has ordered Moore abroad to find solutions to “problems no army can solve.” He dutifully decides to “invade countries populated by Caucasians with names I can mostly pronounce,” i.e., Europe. And so begins a two-hour journey around the continent that should be 40 minutes shorter.

In Italy, we learn that all workers get long, employer-paid vacations. In France, we learn that school lunches are very delicious. (In one of the film’s few funny moments, disgusted French schoolchildren mock photos of U.S. school lunches.) We also learn that France is serious about sex education because its people “aren’t fighters, they’re lovers”—an aside made painfully off-key by bombing in Syria.

Next we head to Finland to see how the world’s leading education system thrives despite a lack of both homework and standardized tests. (The Scandinavian secret? Teachers put the happiness of students first!) Then we witness Slovenia’s tuition-free higher education system and meet a few Americans who wisely chose to avoid crushing debt by attending university there. We see footage of militant student groups in various countries protesting tuition hikes, followed by Moore’s lamentations about U.S. students’ passivity—which seems a bit unfair, given groups like Strike Debt, and especially dated after last fall’s Million Student March.

Still, Moore’s wish list is on point. A strong middle class, protected by laws against contacting employees on vacation or emailing after normal working hours (Germany). A constitution that guarantees women’s equality (Tunisia). Gender equity in corporate boardrooms (Iceland). A penal system that is rehabilitative rather than punitive (Norway).

And there are a few genuinely provocative moments, such as when he contrasts Germany’s mandatory classroom lessons about Nazism and the Holocaust with the festering and largely unacknowledged legacies of slavery in the United States.

It’s a bit hard to appreciate all this, though, after you’ve survived the film’s interminable Italy and France sections and endless shots of Moore marching around with an American flag over his shoulder. Then there’s his meaningless celebration of landing an interview with the president of Slovenia—an interview that the president doesn’t allow to be filmed.

Perhaps I’ve tired of Moore’s shtick in my old age. I sincerely hope others haven’t, so they can learn about how Germany requires union representatives to sit on corporate boards and Iceland actually threw a bunch of bankers in jail after they drove the island’s economy into the ground in 2008. With creative thinking apparently banned in the halls of Congress and on the presidential campaign trail, solutions from abroad ought to be high-value imports.

This isn’t a movie, however, that will change hearts and minds. It’s impossible to imagine any conservative having a come-to-Moore moment after watching the filmmaker coax Europeans to trash the American way. His prompt:

“What would you like to say to the American people?”

“I would never want to be your neighbor,” replies one Icelandic CEO. “You don’t treat your fellow Americans the way you should.” And conservatives will loathe the rosy, reductive renderings of countries with corrosive immigration and unemployment problems.

But progressives may find concrete policy proposals here, while anyone who’s in the political center (or simply apolitical) will get an education. Could this be the movie that introduces millions of Americans to the social democratic wonders of Europe so often rendered suspect or loony by U.S. media?

Past Moore movies have proven that huge audiences can be found for political documentaries. Oscar-winning Bowling for Columbine was the highest-grossing documentary until Fahrenheit 9/11 snagged that record, and Sicko is in the top 10 for the genre. But all those films aimed their fire squarely at the United States, while Where to Invade Next aims a meandering Hi-Liter at a smattering of countries. And we all know that outrage is an easier sell than optimism. If curious millions do overcome Americans’ historic lack of interest in how other countries operate, fork over a few bucks and make it to the closing credits—which cannot be said for those I invited to watch the film—they may feel ripped off. Doesn’t Moore call himself an entertainer?

After the disappointment of Where To Invade Next, I cheered myself up by watching a few TV Nation clips on YouTube. They were entertaining and sadly not very dated: Moore talks to white males who feel “endangered” and “oppressed.” He has pro-lifers handdeliver flowers to the home of a very inhospitable anti-abortion activist. Crackers the Corporate Crime- Fighting Chicken is introduced. I suppose making fun of our problems is easier than trying to solve them, and I should give Moore credit for making a movie about what’s right rather than just what’s wrong. But I hear we’re in a new golden age of television, so I can’t resist offering a tip to Netflix: Get the rights to stream TV Nation and order up a new season.

Jeremy Gantz was the Web/Associate Editor of In These Times from 2008 to 2012. His January 2011 cover story for the magazine, "Terrorist by Association," was selected as a finalist for the Molly National Journalism Award 2012. He is now a contributing editor to the magazine, focusing on labor issues.