However, once those bargaining sessions between unions reps and their government employers are redefined by the Supreme Court to be political speech, any law restricting what can be said, what items can be raised, seems to be a restriction by the government on those union members’ free speech rights. 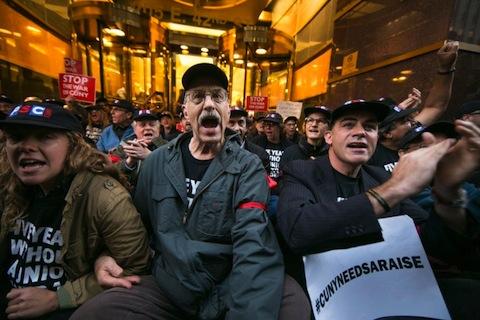 The CUNY Professional Staff Congress, during a civil disobedience action in November 2014., PSC

As the spring semester starts up at the City University of New York, union activists continue the painstaking work of preparing for a strike authorization vote. Faculty and staff at CUNY have been working without a contract for over five years. While Governor Cuomo disinvests in the primary college system for working class New Yorkers, management proposes salary increases that amount to decreases after inflation.

The parallels between the struggle to save CUNY and the struggle over the future of Chicago Public Schools are obvious, with one major exception: it is totally illegal for teachers to strike in New York. The last major union to violate the draconian Taylor Law, TWU Local 100, was fined $2.5 million for waging a 60-hour strike that shut down the city’s subway and bus system in 2005. On top of that, the union’s ability to collect dues money was suspended for a year, its president jailed for 10 days and each individual striker was fined two days pay for each one day on strike.

But in an interesting twist, the anti-union Friedrichs v. CTA case currently under consideration by the Supreme Court could actually lay the ground work for making public employee strikes in New York and elsewhere constitutionally protected free speech.

A long history of carving unions out of the 1st Amendment

One could understandably be confused about how a collective protest that involves refusing to work could even be illegal in a country that prides itself on its supposed pursuit of life, liberty and whatnot. How is a strike and picket line not a constitutionally protected exercise of free speech and free assembly? And how is prohibiting workers from striking not a violation of the 13th Amendment’s protection from involuntary servitude?

Early on in our nation’s history, conservative courts treated unions as criminal conspiracies and strikes as interfering with employers’ property and contract rights and with Congress’ responsibility to regulate interstate commerce. Rooted in imported English common law and beginning as early as 1806, these instances of what early unionists derided as “judge-made law,” should be regarded as a betrayal of the American Revolution.

As detailed in William Forbath’s Law and the Shaping of the American Labor Movement, unions’ legislative agenda during the 19th and early 20th century was basically to get the government and courts out of labor disputes. Unions sought to have labor legally defined as “not a commodity” and to restrain judges from issuing injunctions against pickets and boycotts, with mixed results.

By the time the National Labor Relations Act was passed to encourage and regulate collective bargaining, its framers recognized that if they rooted the Act’s authority in the 1st Amendment, it would not be found constitutional by the conservative Supreme Court. And so labor rights in this country are rooted in the Interstate Commerce Clause, which is why they’re so wonky.

Public sector unions, whose ability to function is immediately at stake in the Friedrichs case, are not covered by the federal labor act. Instead, many states passed laws that are modeled on the NLRA. But with a crucial difference: when bosses get to pass laws that apply to their employees (which, if you think about it, is exactly what public sector labor law represents), they’re guaranteed to make it even more unfavorable than private sector rules.

Unsurprisingly, many states make strikes by public sector employees like the CUNY faculty and staff totally illegal, or else severely restrict them. Many states also make many union demands illegal, either by statute or by judicial decisions. The Friedrichs case, by inserting public employees’ 1st Amendment rights into collective bargaining could give unions a very useful tool for reversing many anti-union measures that are on the books.

Public employees have actually enjoyed a degree of free speech protections at work for some time, making them the only workers in America who do. Remember, the 1st Amendment only prevents the government from restricting a citizen’s rights of free speech and assembly. Since public employees work for the government, their employer is constitutionally forbidden from restricting or coercing their political speech.

Historically, this has been limited to actual political speech (supporting a candidate, wearing a political button, speaking in the press and the like). Unions have carefully kept their political funds and activity separate from the agency fees that they collect from the public employees they are required to represent by law. Right-wing efforts to fight the ability of unions to collect dues and fees by arguing that the political activity of public employee unions is compelled political activity have been decisively rejected since 1978.

So, in order to overturn this long-settled precedent the parties behind Friedrichs—egged on by Justice Alito—are lodging a wildly expansive argument that every interaction that a union has with its government employer is inherently political. Bargaining demands, grievances, labor-management committees, job actions: all of it, goes the Friedrichs argument, is political, thereby making the collection of agency fees compelled political speech.

Let’s think about some of the implications of this argument. For starters, the Taylor law that tells CUNY faculty and staff that they will be fined and their leaders imprisoned if they strike seems clearly to be a coercive restriction on their chosen method of political speech. If the Professional Staff Congress is hit with any penalties for either planning or going through with a job action, one hopes they can time their appeals to reach higher level courts after the Friedrichs decision comes down in June.

Across the river in New Jersey, another state with strong unions and shitty labor law, the scope of items that unions are even allowed to raise at the table is restricted by statute and a number of horrible court decisions.

One area of restriction is a strong prohibition on pattern bargaining (i.e. one bargaining unit aligning its demands with another bargaining unit’s settlement). The most farcical example of this is Rutgers University, where management habitually creates new job titles that they argue fall outside the bounds of the existing faculty bargaining unit.

When the union organizes these new groups (adjuncts, post-docs, summer and winter instructors), management threatens legal hellfire and judicial damnation when the union seeks the same rights and benefits for all their members. The union could, however, propose one contract, comprehensive of all of the job titles it represents, in the next round of bargaining and tell the state university to go ahead and take them to court when they stick to their guns.

More galling: teachers unions in NJ are prohibited from even raising demands around class size and staffing levels. I can think of few issues that teachers have more of a burning desire to talk about! But they can’t, at least at the bargaining table.

However, once those bargaining sessions between unions reps and their government employers are redefined by the Supreme Court to be political speech, any law restricting what can be said, what items can be raised, seems to be a restriction by the government on those union members’ free speech rights. Perhaps the New Jerseya Education Association and American Federation of Teachers New Jersey locals should celebrate their new rights with a coordinated campaign to lower class sizes across the state?

Perhaps most deliciously, the right-wing Friedrichs effort is in direct opposition to Gov. Scott Walker’s offensive agenda in Wisconsin. Walker’s anti-union Act 10 did a lot of nasty things to public employees, some of which will continue to stand. It took away payroll deduction and forced unions to annually recertify as the collective bargaining agents for their members.

But what mostly caused union membership to plummet in the state was that certified unions were prohibited from bargaining over anything of substance; not just raises that exceed inflation, but duties, hours and work schedules and every other everyday issue that workers want to have a voice at work about.

If Justice Alito gets his way, then Scott Walker is suddenly massively violating the free speech rights of Wisconsin public employees. I humbly suggest that every union still certified demand to bargain the day after the decision. They could throw their old contracts on the table and sue every school board and state agency that refuses to discuss those items. I’d also suggest that they begin drawing up some new picket signs.

Labor needs a Plan B

The hubris and general stupidity of Justice Alito—who tried and failed to get this ruling in last year’s Harris v. Quinn—and the vast right-wing conspiracy of union-busters who raced this case through the courts in less than a year perhaps shouldn’t be surprising. They just want to kill the unions, and they’re used to getting their way.

But, in their narrow-minded pursuit of denying unions in the public sector agency fee, they are mindlessly trying to just hand to us free speech rights that conservative jurists and politicians have studiously avoided granting to union efforts for over two centuries.

Unions’ and their allies’ public messaging against the Friedrichs assault has focused on how it is an assassination on the labor movements, a nakedly partisan attempt to weaken a field operation that helps turn out votes against the GOP and how it will deprive many thousands of working people—particularly women and workers of color—from a pathway to a better life. And all of that is true. And unions have put together a very robust defense against Friedrichs, with an impressive array of supporting briefs, that is right on the facts, right on the legal precedents and right on the politics.

But labor also needs more people engaging in a debate about what, in theory, could come the day after an adverse Friedrichs decision. That shouldn’t be limited to toying with the legal implications of the Court’s logic, but also what kind of mobilizations, boycotts and—dare we dream?—strikes could be launched in the days and weeks after.

Outlets like In These Times are great for offering alternative perspectives that contribute to a broadening debate. But I sure as hell hope that the unions that have the most to lose from a “bad” Friedrichs decision, and who have done most of the heavy lifting on winning in court, are also putting together alternative war rooms to figure out Plan B.

The more that we visibly and loudly plan and prepare our response, and calculate the potential upsides of a “bad” decision and maybe (some of us) even get a bit excited about the chaos we can create post-Friedrichs, the more likely that five members of the Court might realize that Alito is pushing for them to make a very big mistake. But if the Supreme Court goes ahead and tears up the current labor law regime in a nakedly partisan act in the middle of a presidential election, then we had better be prepared to create the chaos that the Court is inviting.

Shaun Richman is a former organizing director for the American Federation of Teachers. His Twitter handle is @Ess_Dog.