Deadlocked decision "is a rebuke against this well-funded attack on workers' voice and ability to join together." 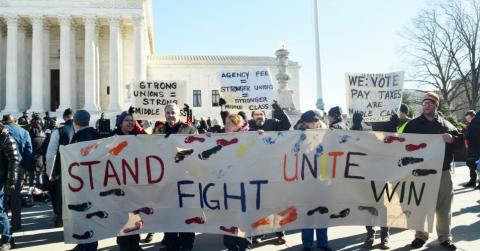 The U.S. Supreme Court fight over public sector unions—which had the potential to deal a serious blow to organized labor nationwide—"sputtered to an end" on Tuesday in a 4-4 tie that leaves intact a favorable lower court ruling.

The plaintiffs in Friedrichs v. California Teachers Association—backed by right-wing, anti-union groups like the Center for Individual Rights—sought to overturn a 1977 precedent that says non-union members can be required to make payments to cover the cost of collective bargaining in lieu of dues to a union.

Such a reversal, The Nation warned in January, would "trigger an earthquake in American labor relations."

As Noah Feldman wrote Tuesday for Bloomberg View, "the death of Justice Antonin Scalia was a game-changer, taking away the fifth vote that would've been necessary to repudiate the precedent. Today the court issued a one-sentence opinion that proved both that there were briefly five votes to overturn the precedent, and that Scalia's death has saved unions from constitutional disaster. The court said simply that it was divided 4-4, and that the lower court's opinion based on the precedent would therefore be upheld."

That opinion, from the U.S. Court of Appeals for the 9th Circuit, allows the California Teachers Association to keep collecting so-called "fair share service fees," but it does not have national implications.

As USA Today explains, "The 9th Circuit standard applies only to states within its jurisdiction, including Alaska, Arizona, Idaho, Montana, Nevada, Oregon, and Washington as well as California. And the Supreme Court could agree to hear the case again, or accept a similar case for argument, when it gets back to full strength."

In the eyes of many observers, unions merely dodged a bullet on Tuesday.

The Court had heard the Friedrichs case on January 11 and, from all appearances then, it seemed to be on its way toward a five-to-four decision to declare that it would be unconstitutional for unions representing government employees to charge fees to workers they represent but who are not among its members, even when the fees cover the costs of normal union bargaining over working conditions, not lobbying or outright political advocacy.

But the death of Justice Antonin Scalia last month left the Court to either find a way still to decide the case, or to end it with an even split.  If it had actually tried since Scalia’s death to find a way around a split, that effort clearly came up short.  The result set no precedent, and thus left the constitutional issue dangling.

Still, a slew of national public unions celebrated Tuesday's outcome as a victory, declaring in a press statement that the result in Friedrichs "is meaningful for millions of families across the country, as it is a rebuke against this well-funded attack on workers' voice and ability to join together."

"From the beginning, this case was never about what’s good for our students," said Lily Eskelsen García, president of the National Education Association, "it was a thinly veiled attempt to weaken the rights of public employees, like teachers and other educators."

She continued: "The corporate interests behind this case know that if our union is weakened, it will be harder for us to stand together to negotiate good wages and benefits and to continue fighting for the things our students need. We must join together against these attacks because this country can't grow stronger until we defeat those who want to hold down working people."

For Mary Kay Henry, president of the SEIU, the case—and the ruling—point to the importance of political participation.

"We know the wealthy extremists who pushed this case want to limit the ability for workers to have a voice, curb voting rights, and restrict opportunities for women and immigrants," she said, "and we know the way to stop them is by taking our fight to the polls in November."

Indeed, said Economic Policy institute vice president Ross Eisenbrey on Tuesday, "Republicans in the Senate have made it clear that they will refuse to confirm Judge Garland. In that case, the next president’s Supreme Court appointee will probably cast the deciding vote on this issue when the next case comes before the court. That vote will determine the future of effective unions, democratic decision making in the workplace, and the preservation of good, middle-class jobs in public employment."