After decades of campaigns, the global movement against sweatshops had a few modest (but important) victories. However, a recent breakthrough in Bangladesh in encouraging, and may show the way for making more dramatic changes in the garment industry. 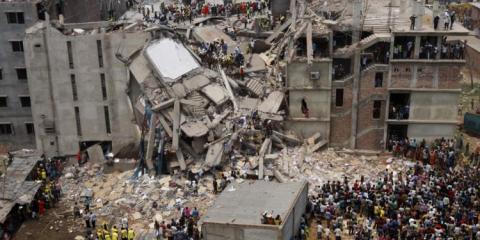 Actually, garment workers’ progress is like a nightmare. Even having those dreams is a curse for us the garment workers. Our salary is very low compared to the garment workers in the developed countries. Our standard of living is unbearable. We can barely make our living. We can only breathe. That’s our situation now. Our family, relatives, kids — those who are near to us — we can’t treat them properly. The dreams that we have, they turn into curses. - Mamun Faruk, garment factory worker, Bangladesh, December 2014

Workers report they will not be safe without a voice at work. Fire, electrical, and structural safety in garment factories is essential and will save lives. But these renovations and repairs must be the foundation for additional reforms that address the intimidation and violence that keep workers silent, afraid to voice concerns and put forward solutions to ensure their own safety.

Going Forward
The Bangladesh Accord represents a kind of industry-wide, multi-employer collective bargaining agreement, and is without a doubt a major step forward in this dismal business. It has its drawbacks, however — for example, it does not cover wages, which are extremely low in Bangladesh. Could the Accord expand to cover other issues? Is this a model that should be brought to other countries? Most importantly, will this create more space for workers to organize in some safety and security? Or will it eventually become a top-down agreement on paper with little input from workers, as so many codes of conduct have become?
I have written previously how a global agreement of this kind could be organized with workers and supporters acting together in the ways I have described here. Of course we must consider the limits of this approach if it relies on significant activist/consumer solidarity. For dramatic improvements we may need millions of people to take action of some kind, but we must admit that many consumers like low apparel prices, and though they may not approve of sweatshop conditions, the factories and workers may be sufficiently distant that they simply will not be moved to take action. Moreover, as I have argued elsewhere, in a critique of fair trade “social labels,” improved conditions for workers should not depend on the whims of relatively wealthier consumers.
Ideally, Global North workers in the apparel supply chain, for example at warehouses and retail stores, would take action along with their colleagues in the Global South factories to improve conditions throughout the system, but this kind of cooperative disruption is too rare. There are some examples. Years ago, when I worked for the apparel and textile workers union UNITE, we won several successful organizing campaigns with the stipulation that the companies address labor issues in their factories. But the majority of major apparel and retail company facilities in North America are non-union, thus this approach also has its challenges. There may be more possibilities in Europe where the labor movement is stronger.
In any case the workers themselves are the main enforcers of the Accord, through their collective voice and activity, while their allies act in solidarity. We all know that more empowered workers could have prevented the Rana Plaza disaster, just as workers could have prevented the 146 deaths from the infamous Triangle Shirtwaist Factory fire in New York City in 1911, had they been organized at the time. The garment workers in the U.S. eventually formed unions that raised wages and made the industry safer. This global industry, if restructured appropriately with more bargaining power for workers, could cease to be “a life of fines and beating” and provide better jobs for millions.