Media Bits and Bytes - 3 Bytes of the Apple Edition 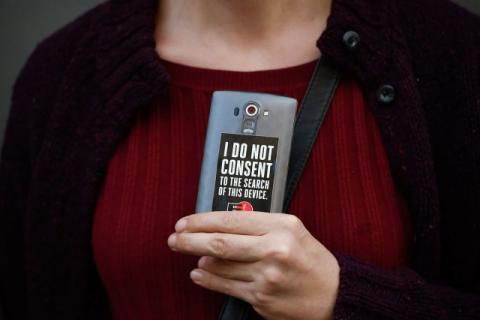 MSNBC has confirmed with The New York Times that the network and Melissa Harris-Perry have officially parted ways. Harris-Perry cited moves made within recent weeks by the network to usurp the program’s autonomy, preempting it for two weeks with coverage of the election. The network’s choice subsequently took away focus from topics like race and identity politics, which it has been known for since first airing in 2012.
“Our show was taken—without comment or discussion or notice—in the midst of an election season,” she Harris-Perry wrote. “After four years of building an audience, developing a brand and developing trust with our viewers, we were effectively and utterly silenced.”

What’s Really at Stake in the Apple Encryption Debate

The FBI’s much-discussed request to Apple can seem innocuous: Help us extract six weeks of encrypted data from the locked iPhone of Syed Farook, an employee of San Bernardino’s health department who spearheaded an attack that killed 14 people. Most people believe Apple should comply.
But the FBI is demanding a lot more than the data on a single phone. It has obtained a court order requiring Apple to build custom surveillance software for the FBI – which computer security expert Dan Guido cleverly dubs an FBiOS.

In a secret meeting convened by the White House around Thanksgiving, senior national security officials ordered agencies across the U.S. government to find ways to counter encryption software and gain access to the most heavily protected user data on the most secure consumer devices, including Apple Inc.’s iPhone, the marquee product of one of America’s most valuable companies, according to two people familiar with the decision.
The approach was formalized in a confidential National Security Council “decision memo,” tasking government agencies with developing encryption workarounds, estimating additional budgets and identifying laws that may need to be changed to counter what FBI Director James Comey calls the “going dark” problem: investigators being unable to access the contents of encrypted data stored on mobile devices or traveling across the Internet. Details of the memo reveal that, in private, the government was honing a sharper edge to its relationship with Silicon Valley alongside more public signs of rapprochement.

On a recent American Airlines flight from Dallas to Raleigh, journalist Steven Petrow decided to get some work done on a story he was writing about the potential impact on ordinary Americans of the battle between Apple and the FBI over creating a tool that will allow the FBI to access virtually any iPhone. The feud has divided the public, lawmakers, and tech CEOs over a person’s right to privacy versus the need for national security. The FBI says it needs a backdoor into the iPhone so it can extract data from terrorists’ iPhones, while Apple says creating a backdoor would leave everyone open to increased attacks from hackers.
When the flight took off, Petrow’s stance on the matter was "I don’t really need to worry about online privacy," he writes for USA Today. "I’ve got nothing to hide. And who would want to know what I’m up to, anyway?" But by the time Petrow landed, he found out "in a chillingly personal way" just how much the outcome of the Apple-FBI battle matters to everyone. That’s because Petrow had been hacked mid-flight.

To mark the one-year anniversary of passage of net neutrality rules, a group of eight Republicans introduced legislation to repeal the regulations.
The simple two-page bill says the Internet regulations would have "no force or effect" and would prevent the Federal Communications Commission from reissuing similar rules in the future.
The controversial rules passed last February reclassify Internet service as a common carrier service, which critics equate with utility-style regulations. The rules are meant to give the FCC more authority to police the conduct of Internet service providers, like Comcast and AT&T.
The rules prevent those companies from blocking or slowing any piece of Internet traffic, while also preventing those companies from prioritizing Internet traffic from websites willing to pay. The rules also contain a broader conduct standard to guard against future abuse.
Republicans and Internet service providers strongly oppose the rules, and a number of industry groups and companies have sued to block them. Other efforts to chip away at the rules have been unsuccessful.