Why Are There Suddenly Millions of Socialists in America?

It used to be a dirty word. Bernie Sanders helped remove the stigma – but it’s the spectacular failure of capitalism that has really changed people’s minds.

March 1, 2016 Harold Meyerson The Guardian
Printer friendly
Why Are There Suddenly Millions of Socialists in America? Published March 1, 2016 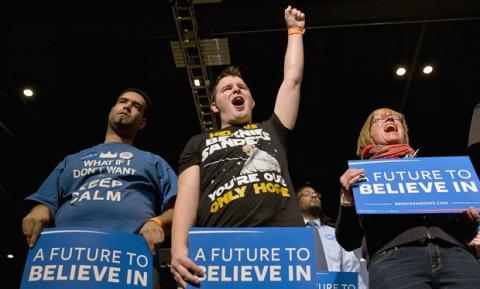 Members of the audience during a campaign rally for Bernie Sanders in Minneapolis, 29 February 2016. , Jacquelyn Martin/AP

In 1906 German sociologist Werner Sombart wrote an essay entitled Why Is There No Socialism in the United States? that sought to explain why the US, alone among industrialized democracies, had not developed a major socialist movement.

Today, however, we need to pose a different question: why are there socialists in the United States? In this nation that has long been resistant to socialism’s call, who are all these people who now suddenly deem themselves socialists? Where did they come from? What do they mean by socialism?

Bernie Sanders’s presidential campaign has made clear that many Democrats are inclined to vote for a candidate who proclaims himself a democratic socialist, but even more dramatic and consequential are the many Democrats who say they’re socialists themselves. In a poll on the eve of the Iowa caucuses, more than 40% of likely Democratic caucus attendees said they were socialists. In a Boston Globe poll on the eve of the New Hampshire primary, 31% of New Hampshire Democratic voters called themselves socialists; among voters under 35, just over half did. And in late February, a Bloomberg poll of likely voters in the Democratic primary in South Carolina – South Carolina! – showed that 39% described themselves as socialists.

Favorable views of socialism aren’t limited to Sanders supporters. The 39% of South Carolina Democrats who call themselves socialists exceeded by 13 percentage points the number who actually voted for Sanders. In a New York Times poll last November 56% of Democrats – including 52% of Hillary Clinton supporters – said they held a favorable view of socialism. Nor was this sway toward socialism triggered by Sanders’s candidacy: as far back as 2011, a Pew poll revealed, fully 49% of Americans (not just Democrats) under 30 had a positive view of socialism, while just 47% had a favorable opinion of capitalism. In 2011, the percentage of Americans under 30 who could have picked Sanders out of a police line-up was probably in the low single digits.

Bernie Sanders didn’t push the young toward socialism. They were already there.

Indeed, the current socialist emergence was foretold by the polls that showed most American looked positively upon the message of Occupy Wall Street – that the 1% has flourished at the expense of the 99%. It was foreshadowed by the rise to bestseller status of Thomas Piketty’s Capital in the Twenty-First Century, and by the success of the Fight for $15 movement in prompting cities and states to raise the minimum wage.

What’s the substance of the new American socialism? I know of no surveys asking this newly hatched brood to define what they mean when they call themselves socialists, but we can make some educated guesses. First, they don’t counterpose socialism to a militant liberalism. The rise in the number of people who identify as socialists coincides with a rise in the number who call themselves liberals. Whereas in 2000 only 27% of Democrats told Pew they were liberal, by 2015 that figure had risen to 42%, and among millennials, it had increased from 37% in 2004 to 49% today. In Bloomberg’s poll of South Carolina Democrats, while 39% described themselves as socialist, 74% also called themselves progressive, and 68% liberal: they weren’t asked to pick just one.

Indeed, one key to Americans’ embrace of socialism is that they’ve not been asked to choose among left-of-center political identities. By running as a Democrat rather than as a third-party alternative, Sanders has made it possible for progressives to call themselves socialist without diminishing their efficacy in real American (or at least, Democratic) politics.

Today, there’s little in Sanders’s own program that hasn’t been supported by many liberals who aren’t Sanders supporters. While only four Democratic House members have endorsed Sanders, more than 60 favor single-payer health insurance, which, of course, is Sanders’s signature proposal.

Why, then, this embrace of a socialist identity by millions of Americans who in earlier times might have been content to call themselves liberal? Sanders’s campaign, for one, has doubtless removed some of socialism’s stigma. The collapse of Soviet communism has allowed younger Americans to identify socialism with the social democratic nations of Western Europe, all of which suffer from less economic inequality and its attendant woes than the United States.

But the prime mover of millions of Americans into the socialist column has been the near complete dysfunctionality of contemporary American capitalism. Where once the regulated, unionized and semi-socialized capitalism of the mid-20th century produced a vibrant middle class majority, the deregulated, deunionized and financialized capitalism of the past 35 years has produced record levels of inequality, a shrinking middle class, and scant economic opportunities (along with record economic burdens) for the young.

The United States may suddenly be home to millions of socialists, but it still lacks a socialist movement. Should the Sanderistas seek to build one once Bernie’s campaign is over, it would be self-defeating to confine it just to those individuals and institutions that felt the Bern. The progressive unions that have backed Clinton in this year’s contest, for instance, would likely support the emergence of a serious, ongoing social democratic organization or organizations within the Democratic party.

“On the reefs of roast beef and apple pie”, Werner Sombart wrote in 1906, all socialist utopias run aground. To the immigrants who came to America and formed its industrial working class, he argued, the living standards they found here so exceeded those they had left behind that going socialist became unnecessary.