Reich: Why the Critics of Bernienomics Are Wrong

The critics of Bernie Sanders' economic plan fail to reckon with the long-term benefits of a single-payer health care system. 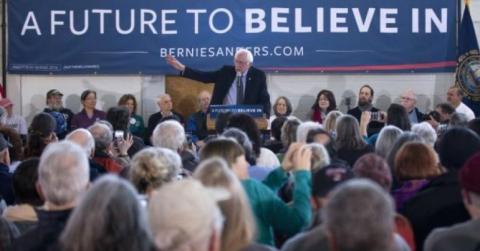 ,
Not day goes by, it seems, without the mainstream media bashing Bernie Sanders’s economic plan – quoting certain economists as saying his numbers don’t add up. (The New York Times did it again just yesterday.) They’re wrong. You need to know the truth, and spread it.
1. “Well, do the numbers add up?”
Yes, if you assume a 3.8 percent rate of unemployment and a 5.3 percent rate of growth.
2. “But aren’t these assumptions unrealistic?”
They’re not out of the range of what’s possible. After all, we achieved close to 3.8 percent unemployment in the late 1990s, and we had a rate of 5.3 percent growth in the early 1980s.
3. “What is it about Bernie’s economic plan that will generate this kind of economic performance?”
His proposal for a single-payer healthcare system.
4. “But yesterday’s New York Times reported that two of your colleagues at Berkeley found an error in the calculations underlying these estimates. They claim Professor Gerald Friedman mistakenly assumes that a one-time boost in growth will continue onward. They say he confuses levels of output with rates of change.”
My esteemed colleagues see only a temporary effect from moving to a single-payer plan. But that view isn’t shared by economists who find that a major policy change like this can permanently improve economic performance. After all, World War II got America out of the Great Depression – permanently.
5. “So you think Bernie’s plan will generate a permanent improvement in the nation’s economic performance?”
Yes. Given that healthcare expenditures constitute almost 18 percent of the U.S. economy – and that ours is the most expensive healthcare system in the world, based on private for-profit insurance companies and pharmaceutical companies that spend fortunes on advertising, marketing, administrative costs, high executive salaries, and payouts to shareholders – it’s not far-fetched to assume that adoption of a single-payer plan will permanently improve U.S. economic performance.
ROBERT B. REICH is Chancellor’s Professor of Public Policy at the University of California at Berkeley and Senior Fellow at the Blum Center for Developing Economies. He served as Secretary of Labor in the Clinton administration, for which Time Magazine named him one of the ten most effective cabinet secretaries of the twentieth century. He has written fourteen books, including the best sellers “Aftershock, “The Work of Nations," and"Beyond Outrage," and, his most recent, "Saving Capitalism." He is also a founding editor of the American Prospect magazine, chairman of Common Cause, a member of the American Academy of Arts and Sciences, and co-creator of the award-winning documentary, INEQUALITY FOR ALL.