March 11th marked the 5th anniversary of the Fukushima nuclear disaster, one of only two nuclear accidents classified as a level 7 event on the International Nuclear Event Scale, (the other being Chernobyl). And while the mainstream media ignores Fukushima’s still unfolding nuclear tragedy; others are pointing to Fukushima’s still intractable problems of public health and safety, radioactive waste and contamination, a grave situation for which no “textbook” exists. 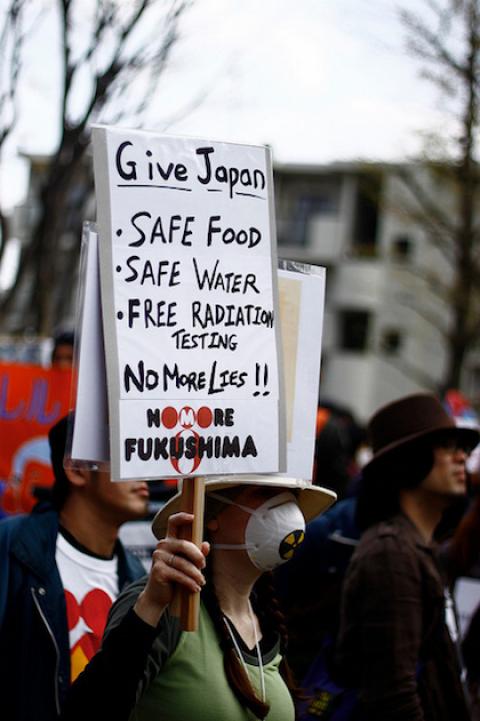 The media moved on some time ago from Fukushima and left most of us in the dark about this unfolding nuclear tragedy. This selective amnesia suits Japanese Prime Minister Shinzō Abe, who reports that all's well with the Fukushima cleanup and the gradual return of resident refugees, as he looks forward to the 2020 Olympics in Tokyo.  Not so, report others.  In December 2015 Fukushima decommission chief Naohiro Masuda warned that the "cleanup" of the most complex industrial accident in history is far from solved: "Nothing can be promised.not even robots have been able to enter the main fuel-debris areas so far. This is something that has never been experienced. A textbook doesn't exist for something like this. New science will have to be invented for the plant to be cleaned." (1) Consequently, new ghost towns, deserted houses, and roads lined with hundreds of thousands of plastic bags filled with radioactive soil and debris supplant the once beautiful farms, neighborhoods and cities of the Fukushima Prefecture.

To keep this paramount industrial accident from slipping into the dim past, let us examine the ongoing history of the Fukushima tragedy. Five years ago on March 11, the Great East Japan Earthquake and ensuing tsunami devastated northeast Japan, killing and injuring more than 20,000 people and crippling the Fukushima Dai'ichi nuclear power plant. Three of the plant's six reactors suffered hazardous nuclear core meltdowns and hydrogen gas explosions, releasing radionuclides into the air, soil and Pacific Ocean. More than 160,000 people were eventually evacuated from the region and most remain today "nuclear refugees," living with the same trauma, fear, sense of displacement, and loss of livelihood and social roots as war refugees. So difficult has been their fate that, by late 2015, 3200 refugees had died of insufficient medical services, exhaustion of relocating, suicide and, likely, heartbreak. (2) In a callous move to keep schools open in parts of Fukushima, the Japanese government raised the "permissible" level of radiation for children. Japanese children can now be exposed to 20 times more radiation per year than was previously allowed, a level comparable to the yearly limit for radiation workers. In commenting on this "inexplicable" decision, Dr. Paul Dorfman of the Energy Institute at University College, London responded, "[W]hat this means is that we may be seeing increased ill health in the future. Not simply gross cancers and possibly heart problems, but also things that are difficult to detect through epidemiology, such as immune problems." (3)

Just one year after the Fukushima nuclear core meltdowns, farmers from Fukushima Prefecture were allowed to return to their agricultural fields, the government claiming the area had been cleaned of radioactivity. Little more than a year later, the farmers confronted the government in a public forum, once they had learned that it was allowing the sale of their produce contaminated with radioactive cesium, up to 100 Becquerels. At the forum, one irate farmer dared the officials to feed cesium-contaminated produce to their children. Another conscience-striken farmer lamented, "Below 100 Becquerels, we can sell but customers think it's clean. But I would not dare eat this produce myself. We farmers feel guilty about selling it to others. There is no longer joy in farming." (4)

Last month a team of US radiation experts visited a temporary housing center, as part of their Fukushima Listening Project, to interview Fukushima refugees living there during these past five years. "You are the first person who has come to talk with me about radiation and how to protect myself," responded one woman. The interviewer, Mary Olson of Nuclear Information Resource Center (NIRS), was asked by women if radiation affects women and girls uniquely. From her they learned *for the first time* that girl children between birth and 5 years old are twice as susceptible to cancer from ionizing radiation than boys in the same age group and that women are 50% more likely to develop cancer than men with comparable exposures.  The women told her that the government declared their homes "clean" and permitted most of them to visit up to 30 times per year. However, she learned as she questioned them that they had not been warned about the outdoor contamination in soil and on vegetation around their homes or about the potential contamination of their drinking water. Olsen's team measured the outdoor environment in the region of their homes, finding levels of radioactivity 50 to 80 times background for the area. Olson then developed a set of public health measures to give the women for protection while visiting their homes: a dedicated set of clothes and shoes to wear while there, to be washed separately from their other clothes; and no picnics outdoors while visiting the cemetery where they honor ancestors. The acute negligence of the government regarding exposure while visiting their "safe" homes was nothing short of criminal. (5)

For the past five years radioactive water from the Fukushima site has poured via groundwater into the Pacific Ocean at the rate of 300 tons per day, the largest accidental release of radioactive contaminants to the oceans in history. Radioactive cesium, a carcinogen, which accumulates in animal, fish and human tissue, has been found throughout mainland Japan, in fish off the coast of Fukushima (thus closing that industry), and in large migratory fish such as Bluefin tuna off the coast of California. (6)

To stanch the flow of millions of gallons of groundwater from the immensely hazardous reactors into the ocean, the owner, TEPCO, has constructed a frozen underground wall around the radioactive reactor buildings to divert groundwater around them, a diversion they claim will reduce the contaminated groundwater to one-tenth its current volume. (7) However, technological optimism is regularly foiled by the unexpected: in September 2015, ocean surges from Typhoon Etau overwhelmed the site's drainage pumps and hundreds of tons of radioactive water leaked from the reactors site and ultimately to the ocean. (8) What, then, of more severe typhoons, undersea earthquakes, and the reality of sea level rise, estimated to be anywhere from 1 to 5 meters within 50 years, for this ocean side plant? (9) How will an underground seawall and onsite drainage systems survive natural disasters worsened by climate change?

The fate of extremely radioactive spent nuclear fuel from the site is perhaps the greatest threat to solve (although no country has yet to achieve this). The Ministry of Economy, Trade and Industry is considering burying it under the seabed at 10 to 15 kilometers off the coast, a scheme that would enable the government to avoid contentious negotiations with landowners living near potential on-land disposal sites for the spent nuclear fuel. The undersea burial site would be connected by tunnel to the Fukushima reactor facility so as to avoid the international legal restriction on dumping nuclear waste at sea, according to the government. (10) But, if the land-based Fukushima nuclear plant was destroyed by the unplanned for consequences of an offshore earthquake, who could assure that the undersea disposal site would be impervious for tens of thousand of years to undersea volcanoes, earthquakes and active faults?

Consider a few precedents from other highly industrial and technically competent countries.  One-half kilometer beneath northern German forests lie buried 126,000 drums of plutonium bearing waste in the old Asse salt mine, disposal intended to be permanent for the decay-life of the intensely radioactive waste, some hundreds of thousands of years. The mine walls are now cracking and collapsing under the pressure of surrounding rock and there are fears that drum removal may hasten walls collapsing. (11)

In 2009 news broke that radioactive waste buried by the Los Alamos National Laboratory in nearby heavily fractured mountains was leaking toward the Rio Grande River, one of the most significant water sources for the Southwest United States. The current hazardous waste removal carries critical challenges, among them stirring up radioactive toxic clouds of debris and toxic exposures to cleanup workers. Further, efforts are focused on surface removal but not on contaminated water slipping through crevices of the complex geology beneath the disposal site. (12)

In a December 15, 2015 interview, Mitsuhei Murata, former Japanese ambassador to Switzerland, acknowledged, "it's common knowledge Fukushima is not at all under control." In Fukushima, he said, the government has allowed residents to come back at an exposure limit 4 times that of Chernobyl. "This is a most serious humanitarian matter, if we think about the health of children. So I am asserting the evacuation of children is urgently needed."  He concluded that Japan must seek an honorable retreat from the 2020 Olympics. (13) Echoing his concerns, Former Prime Minister Hatoyama acknowledges that, while the government has claimed the Fukushima decommissioning and cleanup is proceeding well in order to hold the 2020 Olympic Games, it is a grave and uncontrolled situation. (14) Former Prime Minister Naoto Kan, under whose term the nuclear disaster occurred, concurs: "The accident is still unfolding," he recently told the National Press Club in Washington. (15)

[H. Patricia Hynes is a retired professor of environmental health from the Boston University School of Public Health. She directs the Traprock Center for Peace and Justice and is a member of Nuclear Free Future. Portside thanks the author for submitting this article to us.]